When I visit a new place, I like to stay in a central location so that I can fully explore the area on foot. And sometimes, I ended up in a new place because of its conveniences. That’s how I ended up in Madaba, Jordan in November.

My flight into Amman was scheduled to land around midnight and I wanted a decent hotel close to the airport where I would not need a taxi or public transport to get around. According to the internet, Madaba fit those requirements perfectly and I booked a few nights there before I was scheduled to make my way down to Petra.

Admittedly, I did very little research on the city before landing in Jordan. In fact, I only knew that the city was of some religious importance as a result of a really old mosaic in a church somewhere in the city. Basically, I seriously underestimated not only how much there is to see and do in Madaba, but also how great it is to visit.

I also did not realize just how common smoking is, not only in Madaba but the entire country. In fact, most restaurants allow smoking inside and many hotels do as well.

What To Do and See in Madaba

That really old mosaic that I’d remembered reading about is the famous Madaba mosaic map at Church of St. George. It dates back to the 6th century and you can get up close and personal with it in the church. You don’t have to be religious to notice how cool this thing is when you see it. Plus, the entry fee is super cheap. It is definitely worth checking out.

Once you’re done at the church, go left on King Talal St. and when it splits right near the church, keep to the left. You’ll be on the appropriately named Tourist Street, which is where you will find the Madaba Archaeological Park. The signage here is poor, and if you’re like me, then you will walk right past it the first time and wonder if the entrance is really on this street or over on the next one. The entrance is actually off of Tourist Street approximately half-way down the street on the right side.

This is also really cheap to do. If I recall correctly, the entrance fee is just 2 JOD. And this place is full of old mosaics and ancient ruins. 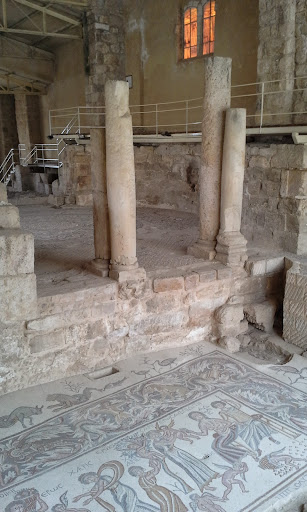 The place is surprisingly large, especially for the amount that you pay to enter. And when I was there, it was virtually empty. A good portion of it is out in the open, so remember to wear a hat or sunscreen as it gets quite warm out there.

As you walk down the ancient Roman road, you will probably notice that through the gates at the end there is what appears to be a school. It is the Madaba Mosaic School. Once you are done in the archaelogical park, wander down the sidewalk and you can enter the school property on the right. I suggest doing this as you’ll see even more mosaics in their courtyard. And if the students are not in class, you will find them to be very friendly to tourists.

On past the Mosaic school, you will finally come to the Visitor’s Center. This is a great place for a bathroom break as finding public toilets in Madaba is a bit of a challenge. The ones here are even free to use!

After stopping for a quick toilet break at the Visitor’s Center, walk back in the direction you came and turn left onto Prince El-Hassan St right after the Mosaic School. Then, a right on the second street followed by a left on the first street, and then another left when the road turns and you will find yourself heading in the direction of the Church of St. John the Baptist. This is hands down the coolest thing to see and do in Madaba.

On a side note, directly across from the Church entrance, you will see a couple of shops selling sandwiches and drinks. If you are at all hungry, then do yourself a favor and get something here. The sandwich guy will put anything that you want on the sandwich, and this is not just some cheap lunchmeat. He might even share his latest homemade pickle batch with you for no extra charge! The best part? That awesome sandwich is just 0.75 JOD – that’s only like a buck in USD!

This is another super cheap thing to check out. The admission is just 1 JOD and so totally worth it! I know what you’re thinking – it’s just an old church, how cool can it be? Well, it is more than just a church. It has this uber cool underground area that is part museum and part really freaking awesome old stuff that will blow your mind. Plus, you can climb the bell tower for a great view of Madaba.

One of the first things that you’ll come across in the underground area is an old Moabite well. It is still used as an actual well. And it is equally creepy and cool. I loved it.

Next up are some rooms that are part of the museum area. One room has a recreation of John the Baptist’s tent setup, which is kind of interesting. And, there are some ancient tunnels that you get to walk/crab-walk though! How cool is that?!?

At the end of the underground area, you get to go up this very narrow stone staircase that brings you back up to the top where you can now check out the actual church or head up on the bell tower.

I would go back to Madaba right now just to go to this church again. That is how freaking cool it was to check out. Plus, the people who work in the ticket office are exceptionally nice. It started raining during my visit and they invited me in for tea while I waited out the storm.

Once the rain finally stopped, I left the church and headed back to Prince El-Hassan St. so that I could go east to visit the Church of the Apostles off Ruks Bin Zaid Al Uzayzi (this road is also called King Abdullah in one section).

Despite the name, you won’t find an actual church here as it’s pretty much just some ruins with some amazing floor mosaics and a large carport-style covering. The place is very big in size and the mosaics are similar to those you see in the other parts of town. However, the guy who works here will bring out a spray bottle and use it to clean the dusty mosaics so that you can see their true colors. When this happens, you will be blown away by how bright and colorful they are under all that dust. This was another truly special experience that was unexpected.

Once you’re done here, you can head back in the direction you came to make your way to the Madaba museum. Unfortunately, it was closed by the time I made it there, but I can share with you a great place to eat across the street from the museum. It is one of those little hole-in-the wall places with just a counter to stand at while you eat. I got a chicken pita wrap thingie that was so delicious that it was practically life changing. Plus, it was cheap! The only bad news is that the employees don’t speak any English. For the chicken pita with fries and two waters, it cost me just 3.50 JOD.

Another cheap and tasty eating tip that I can offer is to check out the falafel shop beside the Mosaic City Hotel. They make the best falafel sandwich that I have ever tasted. Not a lot of English is spoken by the employees, but you won’t need it as they only seem to make the one meal. The price of this sandwich is just 0.50 JOD and it is large enough to keep you full for a while.

Overall, I think that you could easily see all the sights in Madaba in a weekend. But if you got an early start, you could do it all in one long day and then spend the second day visiting some of the nearby places like Mount Nebo, the Dead Sea, Jerash, or going down to Al Karak to see the Crusader castle. To give you an idea of such a day trip cost, check out this list.

Where To Stay In Madaba

I suggest staying at the Mosaic City Hotel, which is where I stayed during my visit. The price is fairly inexpensive and it is a non-smoking hotel. Even better, the breakfast buffet is included in the rate and it is a very nice spread. You get a lot of variety from fruits to breads to hot eggs and meat to fresh veggies and cakes.

I found this hotel to be a great location as it was easy to walk to all of the attractions. And nearby are a couple of little bodegas where you can pick up bottles of water and any other snacks that you might need in your room.

The over-night employee is an Jordian-American guy who is very friendly and quick to offer you suggestions on making the most of your stay in the city. And once you are ready to leave and check out another area of Jordan, the hotel can set you up with a good driver at a reasonable rate.