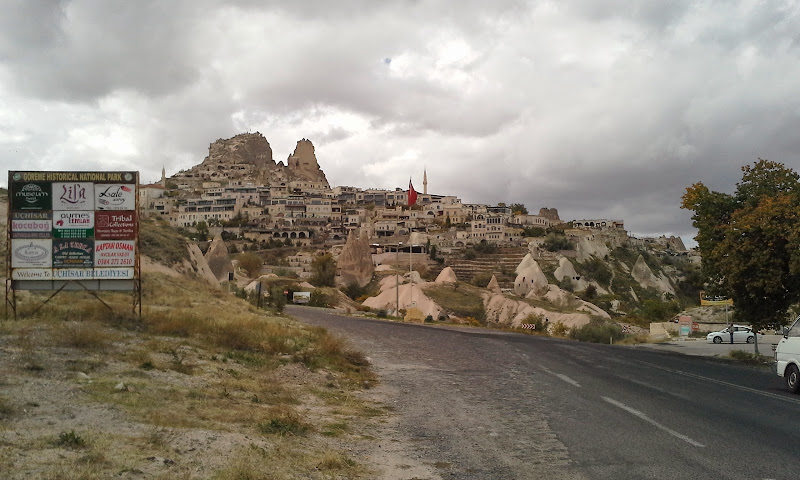 When talking with the owners of the hotel where I was staying in Göreme, they suggested a hike up to Uçhisar castle. You can see the castle from pretty much any point in Göreme and it doesn’t look all that far away. I was told that visiting the castle is a definite must-do while visiting Cappadocia. So, I set out on foot in the direction of the castle.

Well, if you’ve read my post on hiking through Pigeon Valley, then you already know that I did not make it to the castle on my first hike. Due to some poor signage, I ended up going through Pigeon Valley and scaling the side of the valley to end up at Panorama, which offered a great view of the valley and Göreme. So, my path to Uçhisar was actually walking along the main road from Panorama to the Uçhisar city limits. There is no sidewalk or foot path, so do be careful if you go this way as well. As you walk long the road though, you’ll get a view like the one in the photo above.

But, let’s assume that you are walking from Göreme and you are heading toward the direction of Uçhisar and right past the end of the town you come to a split in the path that looks like the photo below. 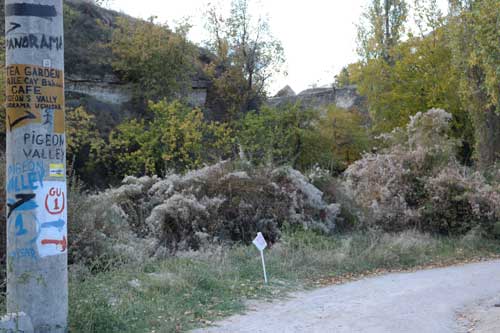 When you get to this point, take the path on the left. It actually the only path that I’ve included in the photo as the Pigeon Valley and Panorama path goes to the right and has a bit of an incline initially. This trail is not quite as challenging as the one through Pigeon Valley. No canyoning or free-hand mountain climbing is required on this one. That being said, there is one area where you are kind of high up and the path is very tiny along a steep incline. Wear good hiking boots and maybe take a trek pole with you and you should be fine, based on my own experience. Of course, there was a group of drunk guys behind me that took this part of the path like it nothing! 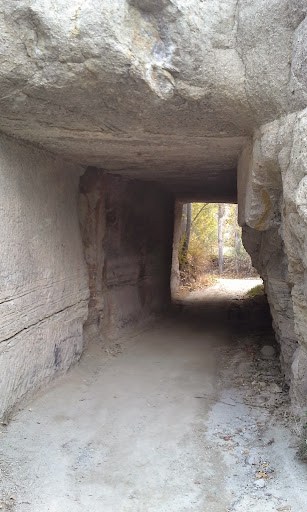 When you first start out on this trail, it is actually very easy. You are walking by some fields and the terrain is pretty simple. Then you get to walk through this really cool tunnel that has been carved out of the rock. But don’t let the brightness in this photo fool you – it was actually much darker in the tunnel! The camera on my phone took this image much brighter than it actually was. So, expect it to possibly be a little creepy but in a cool way.

As you exit this little tunnel, be sure to look up on your right as there is a cave house up there that people seem to actually be using. On my hike, there was even an old wooden ladder leaned up against the rock.

For a good part of the trail now, the hike will still be pretty simple. The scenery is simply amazing, too. It actually is a lot like what I saw over in Pigeon Valley without the challenging of trying to keep yourself up on the side of the valley wall.

You’ll come to a nice, fairly large grassy area that overlooks part of the valley where you can stop for  picnic. On my hike, there was actually a family doing just that and it looked like the perfect place to grab a bite to eat while taking in the cool local surroundings. 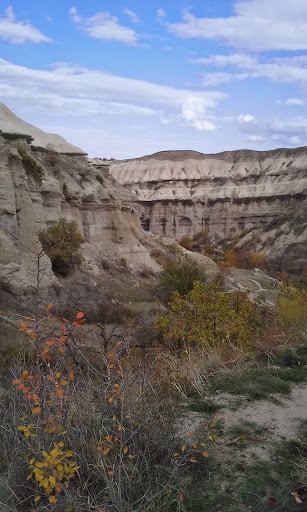 I feel very fortunate that I just happened to schedule my trip to Cappadocia in the fall because the changing of the leaves was really magnificent.

And one of the best things about this hike, as well as all the others that I took, is that you are practically alone out there. Despite the awesomeness of these trails, it seems that very few people actually set out on them.

Of all the hikes that I did while visiting Cappadocia, this is the one where I encountered the most people. Just how many other hikers did I encounter?

Yeah, that’s it. No unnecessary noise from other hikers. Just you and some of the most amazing landscape that you will ever encounter. 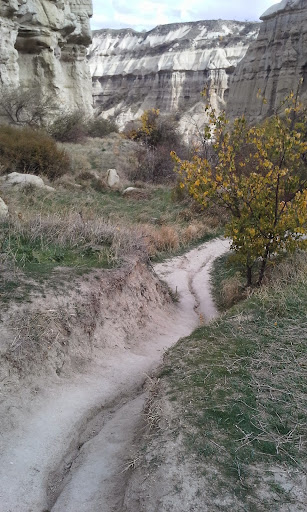 Though this trail did have a couple of areas that were more challenging than the rest, I think this would be an okay choice for hikers with children. So, if you travel with your kids and like to do active stuff with them, definitely consider this. Especially since there is such a spectacular place to stop for a picnic.

Like most hiking trails, your biggest risk on this trail is loose gravel and rocks that have been dislodged by other hikers. And some areas of the trail slope in the center due to rain run off, which you can see in the photo to the side here.

Obviously, experienced hikers know to stay away from the loose gravel, but I just wanted to point that out in case anyone reading this is planning a hike in Cappadocia but doesn’t do a lot of hiking at home.

It’s also worth noting that the sides of the trail that you see might look solid, but it’s actually not. Try and step too close to the edge and that side ledge will just crumble into the path.

Now that you have made it this far on the path, things are about to start getting a bit more challenging. And steep. Add in that loose gravel and you have the recipe for a wipeout on the hiking trail. I only mention this as I saw someone else fall. 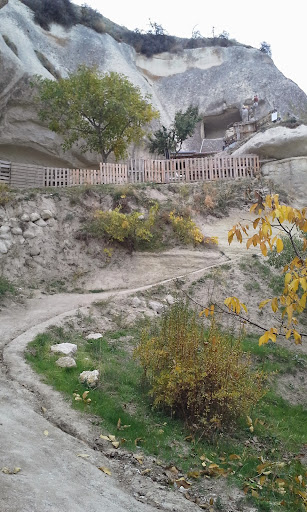 The good news is that you get rewarded after going up the part of the trail with the most loose gravel.

If you look at the photo to the side, you will notice the trail on the right and a fence that runs along the left. And then if you follow that fence up, you might be able to tell that there is a little cafe up there.

Most of the hiking trails in Turkey have these cute little hidden cafes where you can get a snack or something to drink. My photo is a bit misleading though because the trail winds way over to the right (where there is some man-made waterfall action going on) and then curves up to the left to reach the height of the cafe.

After you’ve been sold some Turkish tea or other beverage by the shop owner – they almost always come out to talk to you when they see you approaching, and they are big on the hard sell! – you only have a short distance left before you reach Uçhisar.

As you near the end of the trail, you will likely start to wonder if you are going the right way because it leads you up through some animal pens and someone’s garden before putting you out onto the main road that goes into town.

Once you reach the end of the trail, the only way to the castle is up. Just follow the road (there is a sidewalk part of the way) as it winds up toward the castle. There are only a few signs that confirm that you are heading the in right direction.

After you finally make it to the top, you may need to look for a toilet. Take my advice and avoid the pay toilet by the castle. Why? Because there are no actually toilets, just squat toilets. Granted, this might not be a big deal for guys but for us ladies it is a definite deal breaker – at least for me! Instead, find a local restaurant that has a real bathroom and order up some Turkish tea so that you can use it.

Now, you have to decide if you want to pay to visit Uçhisar castle or not. The owners of my hotel made it seem like it was the most amazing thing ever. So, I paid to go in. I really regret that. When you first enter, it looks all old and cool but there is a local trying to sell stuff! This really put me off since I’d paid to go in this place. But there are only a couple of rooms to explore in this area. After you leave that area, you have to go up some stairs outside to reach the top of the castle. That is all that you get for your admission. No exploring cool rooms of the castle. Just some stairs outside it for you to go up. I will say, however, that the view from the top of the castle is AMAZING. So, if you want to pay for the view, then do it. Or, just check out my photo below and call it a day. Or, take a balloon ride where the views are even better than this. 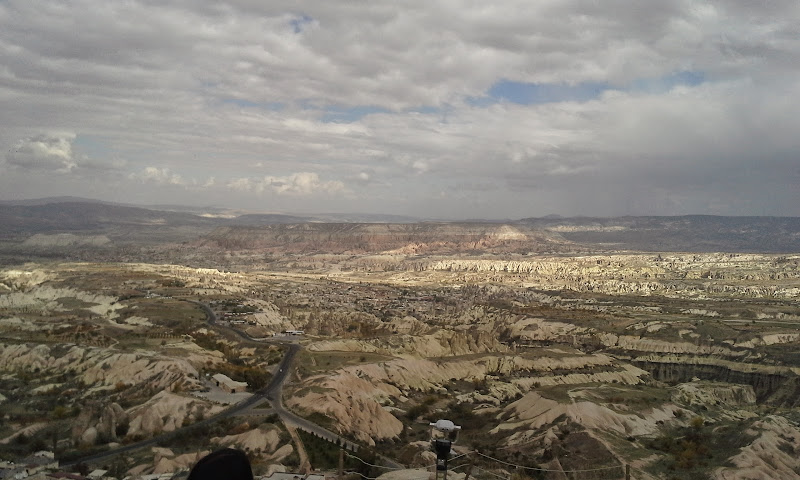 If I recall correctly, the entrance fee that I paid was 6TL, which is less than $3 USD. So, it is definitely a cheap activity. Do know that the climb up to the top is rather steep, however there are actually some handrails (unlike most of the sites in Turkey). I also saw some people on TripAdvisor mentioning that you get to go inside some of other rooms if you’re on a tour. Though I have no idea what tour they are talking about or how much that might cost you.