Las Vegas might be a bustling metropolis, but its big city vibe (and its naughty reputation) overshadows the fact that it’s also an oasis in the middle of a desert. Its nearest major cities are a half day’s drive away, and the second biggest city in the state – Reno – is a whopping seven hours by car.

But that remoteness means Las Vegas is surrounded by untouched land. Which makes it an excellent base for hiking, biking, caving and exploring some of the most iconic natural features of the American southwest.

People don’t make a trip to Vegas to commune with nature. I get it. But if you visit the city without allotting some time to see things outside of Vegas, you’re missing a real opportunity.

Vegas is basically a bullseye in the middle of a national park, monument, and recreation area dartboard. Want to see the Grand Canyon?

Want to stand in the middle of one of the largest protected salt flats in the world? You can do it.

You could spend months exploring the natural treasures around Las Vegas, but if you’ve only got a few days to spare in the midst of a Vegas vacation, you can make a pretty good go at one of these spots in a two- or three-day road trip. 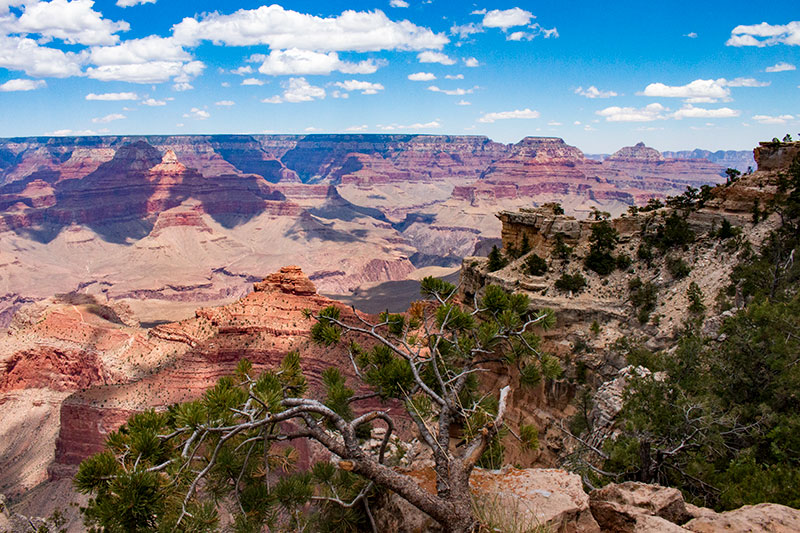 You can technically see the Grand Canyon (Grand Canyon West) in a single day from Las Vegas. But if you want to see that vista, the one romanticized in film and flaunted on the fronts of brochures, you have to get to the South Rim.

The South Rim became the Grand Canyon’s most-visited spot for a reason.

When it comes to activities, there are so many options at the Grand Canyon you won’t have time to do them all. Not in two or three days.

Hiking a few of the canyon’s less-intensive trails or taking a kayak or rafting trip down the river are two of the best ways to spend limited time. Either will give you a better feel for the scope and geography of this massive land feature.

Just remember, the Grand Canyon is the third most visited national park in the country, so if you’re going in the summer, factor in delays.

Where to Stay: Grand Canyon Village or Flagstaff

Grand Canyon Village gets you nearer to the action, which is ideal for a shorter trip. But hotels and campsites are limited and may be booked well in advance.

Flagstaff gets you within an hour and a half’s drive of the south rim. If everywhere closer to the canyon is sold out, you should still be able to find accommodation in the city.

Cool Fact: The rock record at the Grand Canyon showcases 40% of Earth’s natural history. But it’s missing about 1.2 billion years at its base. And scientists don’t know why. 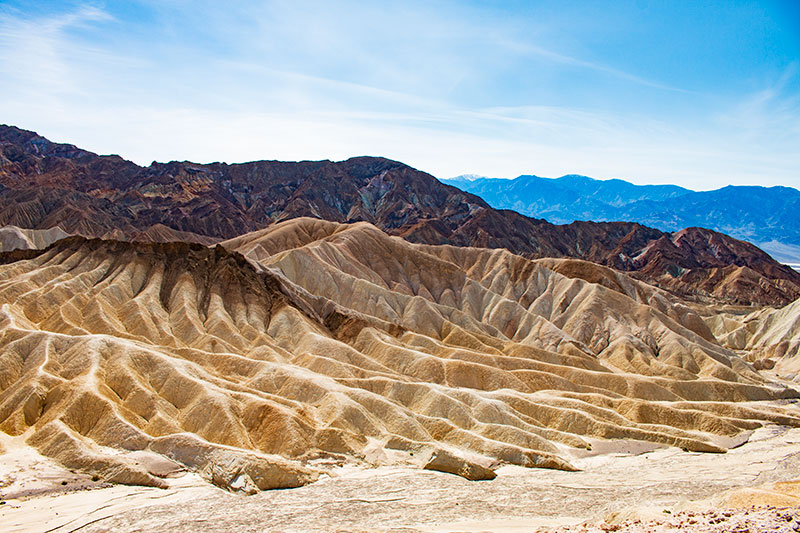 Death Valley is the hottest place on Earth. And it just keeps on proving the point.

In July 2018, Death Valley set a new record for the hottest month ever recorded with an average daily temperature of 108° F.

Badwater Basin, the lowest point in North America, is a sprawling salt flat with an unlikely and constant pool of water that, though too salty to drink, sustains some lifeforms.

The canyons and dunes of Death Valley have such otherworldly mystique that they stood in for Tatooine during the filming of Star Wars.

And, at night, the valley is so dark, every star in the sky appears overhead and the moon looks so close it’s as if you could reach out and touch it.

The hiking in Death Valley is as varied and wild as its landscape. You can clamber to 11,000 feet, trudge through the sand, or feel the unusual texture of the salt flats beneath your feet.

Sandboarding is also permitted at the Mesquite Flat Sand Dunes.

Plus, there are wild horses. 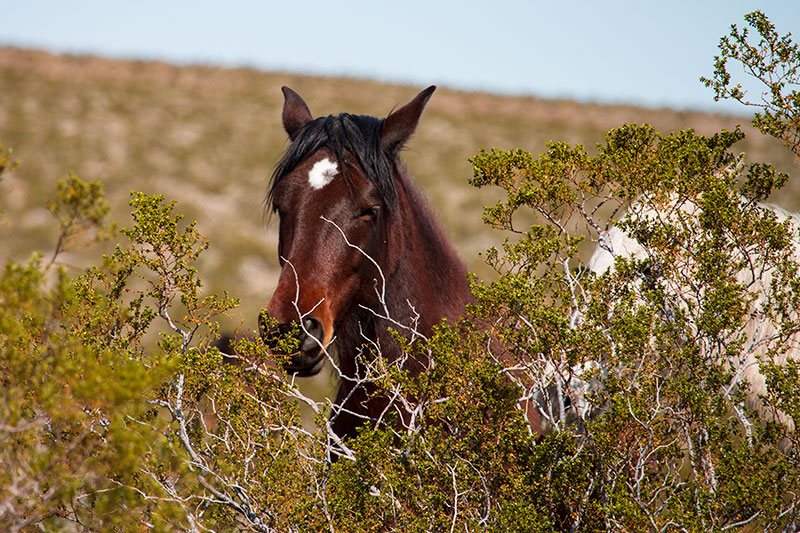 Our best advice? Plan your trip to Death Valley according to your astronomical interests, and stay after dark.

Like many national parks, Death Valley is an International Dark Sky Park. But not a lot of people stick around once the sun goes down.

Prepare to be blown away.

And wear layers. Because those high daily temperatures plummet at night.

Where to Stay: Death Valley or Pahrump

Death Valley has multiple campgrounds and several resorts inside the park. But many of those campgrounds close in the summer months, due to the heat.

Pahrump is near enough to Death Valley to use as a base. It has enough campgrounds and hotels to absorb Death Valley’s surplus.

Cool Fact: The highest point in Death Valley – Telescope Peak – is still covered with snow in May. At the same time, the park’s average high daily temperature is 101° F. 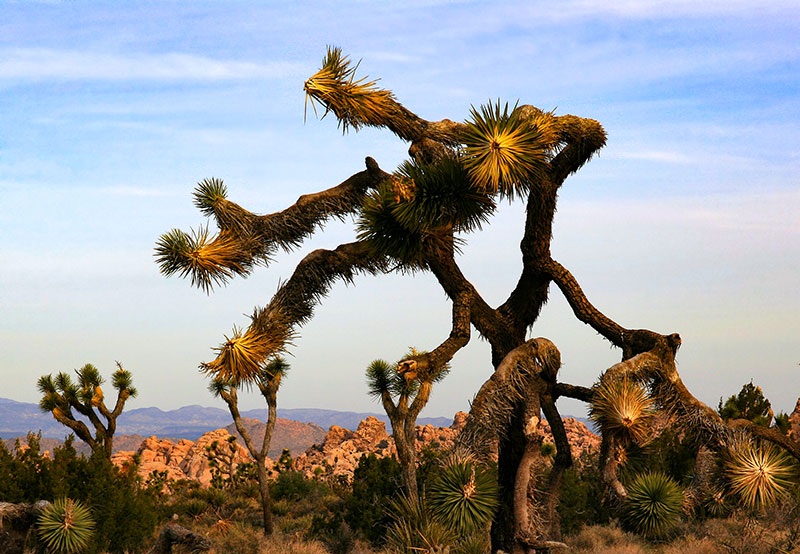 The Mojave Desert is the only place in the world where Joshua trees, scientifically known as yucca brevifolia, grow. This one of a kind plant is so important to the American southwest that the National Park Service named a park after them.

While Joshua trees may give this park its name, though, they are far from the only unique feature of this desert preserve. Joshua Tree encompasses the convergence of two separate deserts – the Mojave and the Colorado (part of the Sonoran desert) – and those two deserts have their own distinct ecosystems.

These differences in ecology are readily observable, which makes hikes in Joshua Tree particularly striking and unusual.

Joshua Tree is also a world-renowned spot for rock climbers. With thousands of routes, those looking to climb can almost always find a free path, even when the park is busy.

And there are additional opportunities for bouldering.

If you’d like to try rock climbing, Joshua Tree is an excellent place for beginners. There are several climbing schools and guide groups that offer lessons and tours in the park.

Where to Stay: Joshua Tree National Park or Palm Springs

If they’re full or you’d prefer to sleep indoors, the Palm Springs/Palm Desert area have plenty of back-ups.

Cool Fact: Like other yuccas, Joshua trees have a symbiotic relationship with yucca moths. Yucca moths pollinate yucca trees, and yucca trees act as hosts for yucca larvae. One can’t survive without the other. 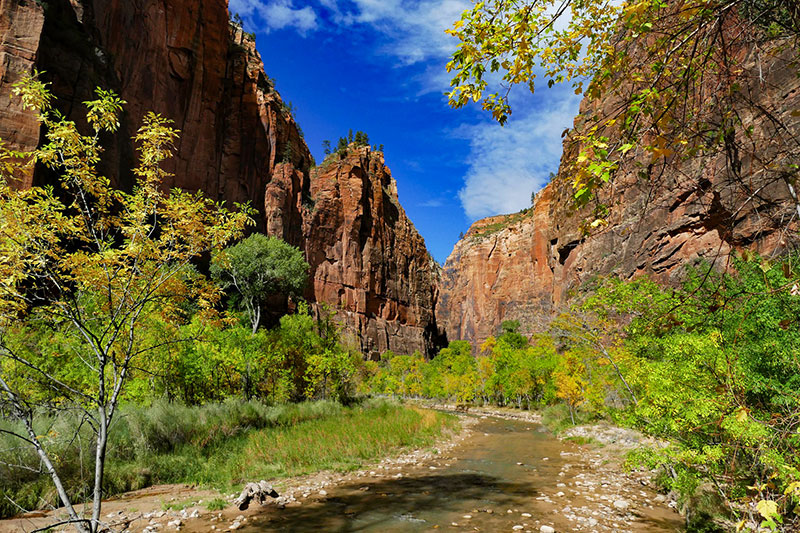 Utah’s first national park is one of the most visually stunning parks in the western United States.

Mostly because it is a land between lands, lying at the point where the Mojave desert, the Colorado Plateau and the Great Basin collide.

This gives Zion a unique blend of attributes. Maples and cottonwoods thrive in the shadows of brightly-hued sandstone cliffs. Grass grows on the canyon floor.

Zion has water, and it changes everything.

That water makes hiking in Zion is an entirely unique experience for the west. You can take a leisurely stroll along the riverside, or hike down the Virgin River through The Narrows.

The Weeping Rock produces a steady stream of moisture that brings to life hanging gardens in the spring.

If hiking isn’t your thing, you can also raft, boulder, or rock climb.

Just plan in advance. Hiking the Narrows or using a watercraft in Zion both require permits. While bouldering and climbing do not require permits, mountain climbing in Zion is largely relegated to big walls. This makes it largely inaccessible to new climbers.

Zion National Park is also right next door to Bryce Canyon and Grand Staircase-Escalante National Monument. Tack on a couple more days, and you’ll have plenty more exploring to do.

Where to Stay: Zion National Park or Springdale

There are plenty of campgrounds in Zion, and a single lodge.

Springdale, right at the gateway to Zion National Park, offers plenty of reasonably-priced accommodations. You should rarely have to go further away to find a spot.

Cool Fact: Kolob Arch in Zion National Park is the 6th longest natural arch in the world, and the 2nd longest in the United States. 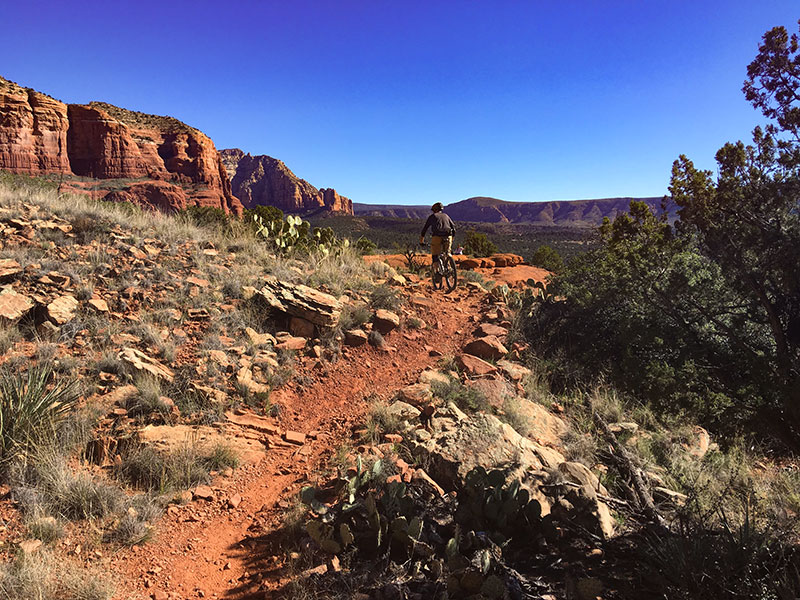 Sedona, Arizona is known for its rock art, its cliff dwellings, and the ethereal red glow that envelops the city when the rising or setting sun reflects off its red rock formations.

It’s also a spiritual mecca of sorts, drawing people from around the world to its vortexes, points of spiritual energy believed to be found amidst its red cliffs.

Whether or not Sedona is a place to commune with your spiritual side is up to you, but it is certainly a place to hike, mountain bike, and take in the artsy, southwestern mountain town vibe.

That artsy mountain town vibe has made Sedona a popular place, though, and, at the very least, it’s a mecca of spiritual tchotchkes. The main thoroughfare is jam packed with places to buy crystals and get palm readings, alongside organic grocery stores and outdoor suppliers.

Driving down its heavily-trafficked main strip might not be the experience you want if you’re looking for an active outdoor adventure. So, do yourself a favor and stay seven miles south in the Village of Oak Creek. Zero new age shops, less traffic and still plenty to see, eat and explore.

Where to Stay: The Village of Oak Creek

There are lots of hotels with views to be had.

Cool Fact: We’ve hiked all over the world and Sedona is the only place we’ve seen Wiccans communing with the goddess on a mountaintop.

Only got one day to get away from Las Vegas?

Check out our 5 Awesome (and Scenic) Active Day Trips From Las Vegas.