Although lacking the infrastructure of more prosperous nations, countries like Ecuador, Peru, Brazil, Chile, and Argentina boast some of the biggest – and relatively untouched – wilderness areas in the world, with National Parks ranging in landscape from high desert-like altiplano cordillera to humid cloud forests with some of the densest ecological diversity on the planet.

One of the most famous, and rightfully so, is Galapagos National Park. This Ecuadorian reserve consists of several islands of the mainland, and is a UNESCO World Heritage Site. Their popularity stems, firstly, from their influence on Charles Darwin’s theory of evolution and natural selection. The park is an ideal location for spotting many indigenous species which can only be found there, including the Galapagos iguana and the long-lived tortoises that have used the sandy beaches as breeding grounds since time immemorial. It is also a favorite spot for scuba divers, as the clear tropical equatorial waters offer a diverse array of marine life, including dolphins and sea lions.

Although lesser known, the Sajama National Park in Bolivia which borders the Lacua National Park in neighboring Chile is one of the oldest on the continent. This high-altitude park is the ancient homeland of the indigenous Aymara people, and is significant both for its rich and ancient cultural heritage and its unique biodiversity. Much of the flora and fauna of the region is exclusive to the region, which has prompted considerable interest from the ecological community.

The landscape is what brings tourists, photographers, and nature lovers alike, though. As part of the Payachata volcanic group, the park gets its title from the iconic snow-domed Sajama volcano which rises from the scrubland horizon like a South American Kilimanjaro. 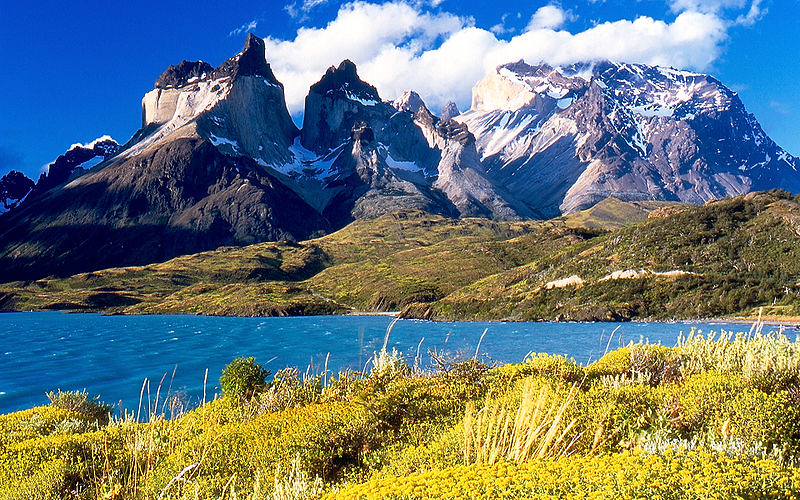 We would be remiss if we didn’t mention Torres del Paine; this world-famous national park in Chilean Patagonia is visited by over 150,000 tourists every year (60% of them being tourists) who come from every corner of the globe to get a look at the razor sharp Dolomite-esque granite range of the Paine Massif. These grey spires seem to rise out of the ground like the spines of some prehistoric monster.

The park also holds a number of hiking trails that circumnavigate chilly lakes, and although hikers are strictly prohibited from straying from these paths, there are several refugios where they can rest. Camping is also heavily monitored and fires are prohibited in order to preserve the fragile ecology which has been threatened in the past by wildfires set (intentionally and by accident) by visitors.

By Gerard Prins (Own work) [CC BY-SA 3.0], via Wikimedia Commons

Finally, for the more adventurous, and for those who aren’t afraid of a little soroche – ie. altitude sickness – the steep and sometimes perilous Cotopaxi National Park just north of Riobamba in Ecuador is a mountaineer’s dream come true. Tours out of Quito or Riobamba can be arranged for a modest price, and often take 2 days to reach the summit of the volcanic Mount Cotopaxi. From the top of one of the world’s highest volcanos the world flattens out and you can almost perceive the actual arc of the planet as it dips against the blue accretion of the atmosphere.

The one common element that seems to tie all of these locations together is a mixture of natural splendor, varied and numerous wildlife, and staggering remoteness. Even in the most touristy of these parks, it’s possible to walk half an hour in any direction and feel like you’re the only person in miles. Which is perhaps what draws us to them – a desire not only to return and reflect on our natural surroundings, but to feel humbled by them.