The year is 1849 when gold seekers stray into a 120-mile basin on their way to the famous California gold mines.

After a two-month deadly ordeal in the basin, one of the survivors, while standing on a mountain, looks at the basin and utters the words, “Goodbye, Death Valley.”

That’s how the name, Death Valley, was born.

Yes, that name perhaps fits the land to a tee.

Death Valley is known for extremes, and anyone who has been there will tell you that it is hell.

Some even joke that it is hotter than hell. But back to the gist: Death Valley National Park facts.

Now, before you start complaining about that momentary heat wave in your locality, you should consider visiting Death Valley National Park, especially in the months between May through October.

Here, tourists have contrasting landscapes to explore, including temperatures that rise as high as 115F and the rare oases that offer relief – not to mention wildflower meadows and desert plains.

Established in 1994, the park has been a tourist destination for travel enthusiasts, save for the faint-hearted.

Save money on your national park visits with the America the Beautiful Pass. 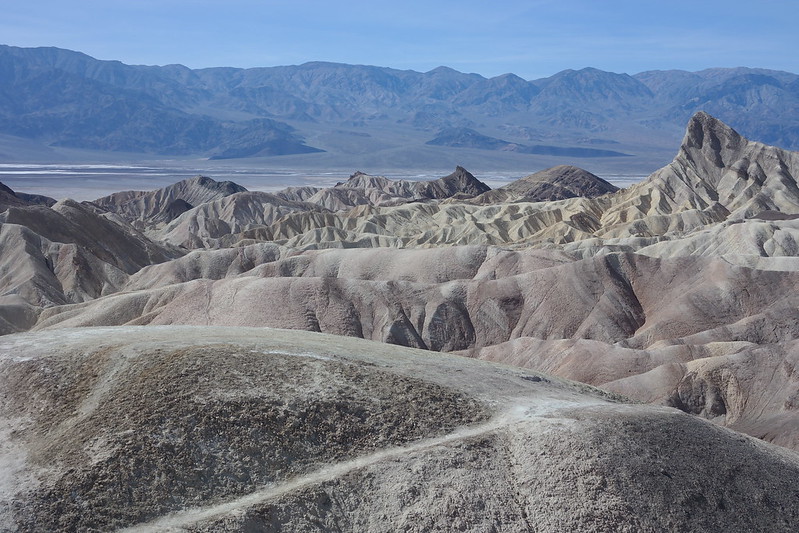 Thanks to its stunning geographical features, Death Valley National Park pulls thousands of tourists who like an adventure.

For instance, tourists rarely leave the park without accessing its summit, Telescope Peak, from where they can take a breath-taking panoramic view of the scenery.

Growing on Telescope Peak’s summit are bristlecone pines, one of the rarest vegetation under the sun.

And that’s not all, as there are also the remains of a lake that existed tens of thousands of years ago, on the name of Devil’s Golf Course.

But don’t think you will find golfers here; the “golf course” is not meant for golfing. They say that only devils golf here.

Devil Golf Course is a colorful jagged spire resulting from a worn landscape.

With a good ear, you can hear the expansion and contraction of minute pops of salt crystals due to heat.

These tiny crystals form into delicate rugged terrain. The terrain is a product of a natural process which has taken place for centuries.

So, rather than carrying your golf club, you would be better off carrying a camera so that you can capture this beautiful landscape for remembrance.

With its deadly landscape, high temperatures, and dry climate, anyone could be forgiven to imagine that no life can survive in this park.

However, with the park being home to more than 50 different types of mammals, it is no secret that the opposite is true.

The park has them all from mountain lions, bobcats, coyotes, and other large carnivores to small animals such as foxes, rabbits, gophers, rats, mice, bats, and squirrels.

Sure, Death Valley National Park has some fish. While the presence of live fish seems impossible here, up to six species of fish can be found in the park’s salt waters.

A good example is the Devils Hole Pupfish, named after its residence, Devils Hope, whose water temperatures revolve around 93F.

Can ordinary fish like Tilapia survive here? No way.

Religious people will tell you that hell is around 444.6F hot. Now, it’s a very high temperature.

If any place under the sun were that hot, everything in the place would melt, with the likes of brimstone changing into a gaseous state.

That said, Death Valley National Park is still the hottest in continental America.

Even desserts such as Sahara, Lut, and Taklimakan don’t come close.

Only Libya has ever recorded a temperature that surpassed this mark.

Thus, unless you have the heart of a lion, you may not dare tour the park in the summer.

Typically, October through April is the best time to visit Death Valley National Park; that’s when the weather is at its best.

Death Valley National Park has been offering excellent confines for movie shooting for many years.

Films such as Return of the Jedi and A New Hope have partly been filmed in Death Valley National Park.

Some popular filming locations in the park include the Mesquite Dunes, Dante’s View, and Desolation Canyon

. Film producers also don’t get it wrong with spots like Artist Palette Drive and Golden Canyon.

A mark of volcanic eruption

Volcanic explosions are not a common phenomenon. Very few people get to witness such in their lifetime.

But many of us have witnessed the marks left behind by these processes, and not very many of them are as significant as the Ubehebe Crater.

Spanning about 0.8km wide and well over 235m deep, this crater is one to behold for those who love geography.

It is located at the Death Valley National Park’s north end, and history has it that the major volcanic eruption associated with this crater took place about 2100 years ago.

However, the most recent eruption is said to have happened three centuries ago (we’re in 2021).

If you want to catch the best view of the crater, simply stand on its rim.

The park boasts some of the most stunning facts any great tourist destination would have.

Save money on your national park visits with the America the Beautiful Pass.

Forget about the myths you may have heard; what you have read in this post is real, hard facts about this park.

Think it was unfairly named? Maybe.