If you’re getting into mountaineering, then you might read some expedition reports to pass the time.

As you read those reports, you’re going to see a variety of different terms referring the to the different parts of mountains.

Not sure what they mean or what part of the mountain you can find them on? We’ve got a quick lesson on the parts of a mountain for you.

If you’re looking for just the basics, then you’ve got three main parts of the mountain.

Sounds simple enough, right? Now, let’s look at a visualization of where those three parts are located on the mountain. 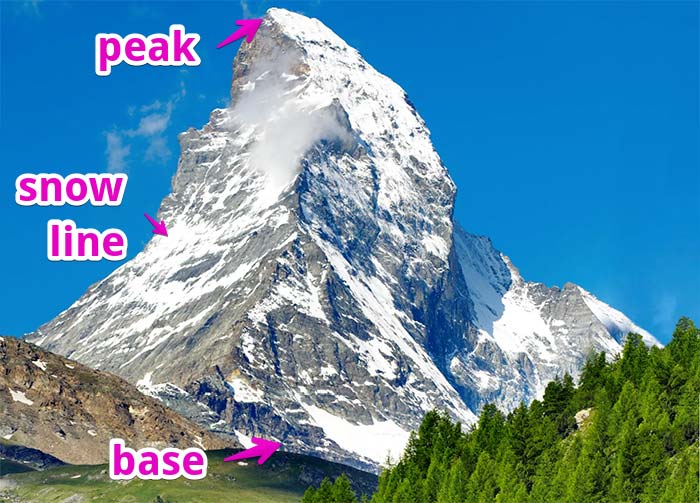 As you can see, the peak is located at the tippy top of the mountain. Mountain climbers refer to the peak as the summit.

The peak of a mountain and the summit are the same thing.

As a result, when mountain climbers make it all the way up to the top of the mountain (the peak), they call it summiting the mountain.

The snow line is high up on the mountain where you can see visible snow. Some mountains are so high that they even have visible snow during the summer months.

Tip: mountain height is not measured from its base, but from sea level.

Other Parts of A Mountain

In addition to the base, snow line, and peak, you’ll come across a lot of other terms for mountain parts that you might not be familiar with.

We’ve got a short glossary of mountain parts for you below.

As noted on Stack Exchange: 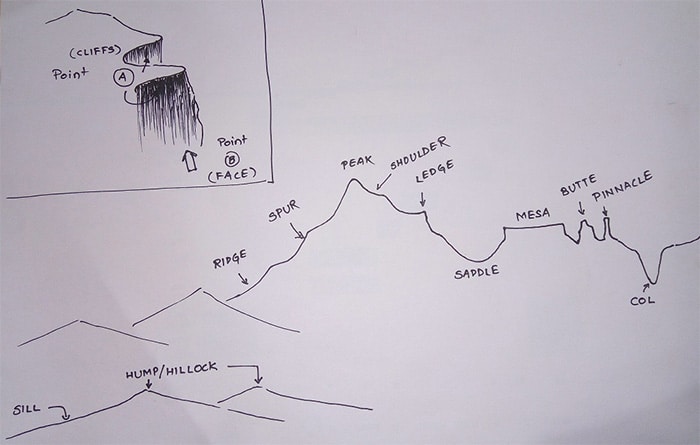 As you can see, there are lot of parts of the mountain that you’ll want to familiarize yourself with before reading too many expedition reports.

Luckily, you can easily refer back to our guide by bookmarking it in your browser.