Many people are obsessed with traveling – they want to see all the wonders of the world, but sometimes they forget there’s more to the world than meets the eye.

Diving offers the unique opportunity to see life from a little-known perspective beneath the waves.

Perhaps not so surprisingly, once you dive you realize there’s a second world worth exploring, one that’s home to immense creatures larger than school buses, tiny flitting fish, colorful coral, lost cities, and mysterious caves that’ll spark your curiosity. 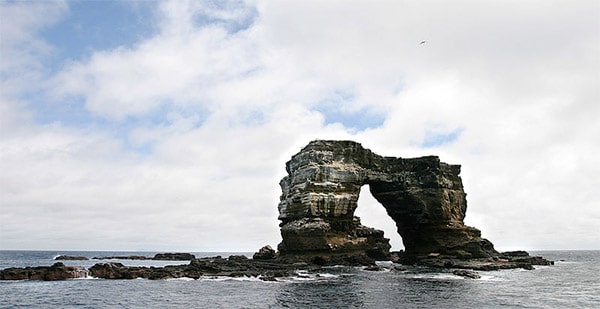 Technically, Darwin’s arch is the naturally formed stone gate rising above the sea in the Galápagos, but it’s what’s beneath that most visitors come to see.

With incredible sights of hammerhead sharks, dolphins, seals, seals, stingrays, sea turtles and many more immense aquatic wonders swishing up to 70 feet below the waves, it’s easy to see why many consider this spot the best place to dive in the entire world.

Note: The arch did collapse in May 2021 due to erosion, but you can still dive in this area.

Anyone who loves ancient ruins and a little bit of history will marvel in this dive off the coast of Egypt.

The ancient city Alexandria held an incredible library, a stunning lighthouse, and was a great center of culture and trade during the 200s B.C.

However, wars and religious strife destroyed much of its splendor over time, but some of the ancient majesty is preserved beneath the waves – an earthquake in the 300s submerged part of the royal palace, making for an incredible dive full of well-preserved architecture and artifacts.

The palace in Egypt fell into the waters by chance, but the 500 submerged statues just off the coast of Isla Mujeres are unique.

They were made and placed with purpose.

The Cancun Underwater Museum of Art brings art and the environment together – the statues that show humans interacting with their world in positive and harmful ways were made with a special cement that allows coral reef systems to grow and flourish, making for a stunning ecological statement.

Aside from the surreal, coral-covered art to the south, you’ll also have the opportunity to swim with whale sharks, which visit the northern end of the island every summer.

If the sight of large sharks doesn’t frighten you, neither will the sunken tomb of the 122 passengers who died when the Yongala sank off the coast of Queensland in the early 1900s during a cyclone.

The wreck was only discovered and identified 47 years after the fact, and you can still see it today.

Covered in coral and surrounded by colorful fish, and elegantly gliding manta rays, it’s hard to come to terms with the fact this awe-inspiring site, and one of the largest intact wrecks, came from a gruesome accident. 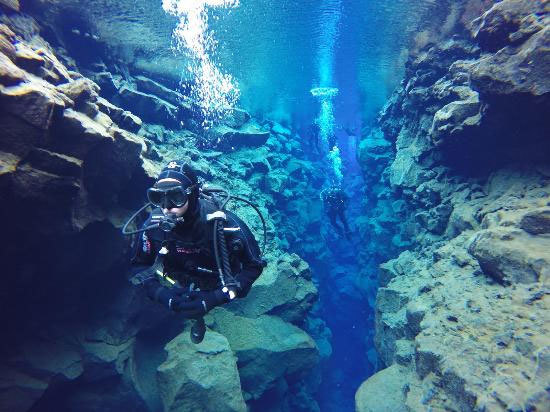 Some people get excited about straddling two states or countries, but divers have the unique opportunity to straddle continents, and explore the rift between the tectonic plates.

Silfra lies at the bottom of a lake in Þingvellir National Park, and although the water is freezing cold, many divers make the plunge every year.

Not only will you be able to say you swam between plates and into the earth’s crust, you’ll also have incredible visibility, which some claim lasts up to 100 meters on a good day.

It’s hard to go wrong if you’re diving in Indonesia, but one of the best spots is Bunaken National Park – a protected underwater space home to hundreds of species of vibrant coral and all the life forms they sustain.

With visibility for about 25 to 50 meters, the whirlwind of light, swirling, living rainbows, sea turtles, and odd mollusks will leave your head spinning.

Do you prefer closed spaces and cave exploration to the sharks in the open sea? Then the caves at Alghero, Sardinia are your ideal diving destination.

Although there are about 300 caves in Alghero (some above ground as well) to explore, most head to Nereo, said to be the largest in the Mediterranean.

What makes this cave stand out from the others is the fact that it’s much more than stalactites and arches – the walls are covered in pale red and yellow coral, teeming with tiny critters like eels, lobsters, and sea horses.

If you can do Nereo, it’s time to step up your game and take your gear to the cenotes in the Mexican Yucatan Peninsula.

There are dozens of these not so little sink holes here, full of clear water and streaming light that makes for underwater spotlights, calm peace, and interesting adventures as you wind your way through tight spaces and pop your head up again for a glimpse of bats and other cave dwellers hanging off the stalactites.

Check out the two most famous cenotes, Dos Ojos and the Pit.

Anyone can recognize the Blue Hole of Belize – the jaw-dropping blotch in the ocean, whose perfect dark blue circle contrasts with the cool cyan Caribbean waters.

We all know what it looks like from above the earth, but what about below?

Although it looks like an abyss, it’s actually part of barrier reef around Belize and brimming with life.

You can expect to see parrotfish, nurse sharks, sea turtles, and groupers, It’s no wonder many come to explore the warm waters of the giant sinkhole every year.

What list would be complete without the Great Barrier Reef? With over 3,000 reef systems it’s the world’s largest, and possibly the most famous.

It sustains thousands of species and is a clear top choice when it comes to scuba diving destinations. However, it’s also in danger.

As sea temperatures continue to rise, the coral becomes bleached, threatening the incredible biodiversity of the seas.

If you decide to dive here, you may even see the contrast for yourself.

No matter your interests, whether exploring sunken ruins, geological wonders, or marveling at the fascinating flora and fauna in the forests of the sea, there’s an amazing dive site waiting for you.