Anyone who likes to surf probably has a pin on their map marking Hawaii as a dream destination.

Although history and tradition might be enough to draw some to the place where surfing began and developed, it is the world class waves found on the entire shore of Oahu and some of the other islands that beckon surfers to the Hawaii islands year after year.

If you’re looking for some great spots in Hawaii to hit the waves, then we’ve got you covered.

Hawaii is home to some of the best waves in the entire world, and although they’re reserved for skilled and experienced surfers, no list is complete without them.

Even if you’re not ready to ride with the pros, you can’t go to Hawaii without checking out the waves and those who’ve mastered them.

Watch and learn some strategies so one day you can ride the big waves, too.

One of the most idolized waves around the world, the Banzai Pipeline is a listed on every surfer’s bucket list.

Three reefs form rows off the shore, and when the waves come, forming incredibly huge tunnels.

With waves that make many surfers envious, it’s no wonder Triple Crown of Surfing stages one of their events here every year.

Don’t get too excited, though, these waves are incredibly powerful, and although they may be a surfer’s dream, without enough experience they could quickly turn into a nightmare.

With rip tides, a strong current, undertow, and the reef just under the surface, wiping out is more than a little dangerous.

A number of surfers have even died trying to ride this wave, so approach with caution.

Despite the danger, it draws crowds from all over the world during winter, so if you think you have what it takes, try to beat the crowds during a low season like February or March.

Not far away from the Pipe is another surf spot that has what it takes to make it into the Triple Crown of Surfing competition.

The reef break is usually divided into six distinct sections.

The fast and shallow peaks of Backyards are the most difficult to maneuver.

Big waves can also be found here during winter.

At the Bowl and West Peak waves start at six feet and reach 12 and 18 feet respectively.

Although Pipeline seems to have ousted Sunset Beach in terms of importance, Sunset is a good spot for experienced surfers who aren’t crazy enough to brave the Pipe but still want to test their physical endurance and abilities.

Although the most famous Hawaiian surf spots lie along Oahu’s north shore, Hawaii’s other islands also have world class waves.

Although it can be tough to catch a good wave, when the conditions are right, surfers can ride the barrel wave all the way from the first section, Coconuts, to the last, Keiki Bowl.

When it doesn’t work, however, it’s known for pushing surfers into the ominously named second section, the Cave.

Not to be confused with the famous shark from the Hollywood film, Pe-ahi or Jaws can still inspire the same kind of terror or daring determination.

This 50-foot wave may not have teeth, but its height alone brings a fair amount of danger.

To catch it, most surfers tow-in, although some miraculous dare devils like Jeff Rowley have paddled out.

In winter months, the wave can get even higher than 50 feet, making it one of the biggest surfable waves in the entire world.

Luckily, there’s more to Hawaii than the kamikaze style waves found on Ohau and Maui.

Not everyone can handle the big waves and even those who can aren’t always looking to strain their abilities all day long.

Sometimes the best surf spots aren’t the most impressive or the most difficult, but the most fun. 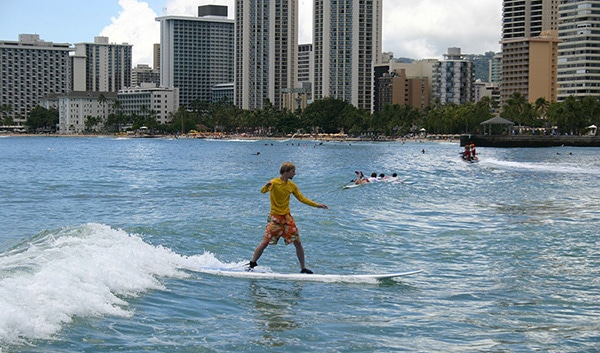 If Duke Kahanamoku hadn’t grown up in Waikiki in the early 1900s, surfing might not be as popular as it is today.

Not only did Duke Kahanamoku swim for the Olympic team and win three gold medals, he also shared surfing with the world, especially when he moved to southern California.

His original surf spot features multiple breaks, most of which break over a coral reef.

Although the reef can be dangerous at low tide, Waikiki offers enough variety to keep any skill level entertained for weeks.

The short fun waves at Canoe’s is the best place for beginners to learn, but can be extremely crowded, and not just by surfers.

Anyone with a bit more experience usually goes to the next break, Queens.

This right and left-hand reef break makes long waves that work all day with a decent swell that starts at three feet and can get up to eight.

For those with even more experience, try paddling out to catch the fast hollow waves at Threes, which can easily get up to 300 m long.

This famous surf spot used to boast some of the biggest waves in the world until Jaws replaced it.

However, waves still impressively swell over 18 and up to 30 feet in winter, an ideal time for experts.

However, during the off seasons, intermediates with good swimming abilities can practice riding moderately high waves.

Going in the fall or spring will give you a safer indoctrination to big wave riding on these reef breaks.

Beginners can still surf here too, but with caution.

Try taking a lesson from one of the schools around Waimea if you’d like to learn here, but don’t risk it on your own.

Although Haleiwa’s waves require west or northwest swells to work, making them a bit temperamental, they can be some of Hawaii’s best waves.

Right breaking waves tend to be hollow and fast, and the occasional left are fickle but pure fun.

In fall and winter, the swell is huge, and it’s normal to see waves well over three feet.

Although this is one of the stops on the Triple Crown, Haleiwa isn’t reserved for pro surfers.

Outside of the peak winter months, intermediate surfers can test their abilities here.

Beginners can also catch a few waves here near the beach, but shouldn’t venture out too far even if the waves seem tame.

Even when waters seem calm, an eastern current commonly referred to as the treadmill will pull surfers out of line as they paddle out to catch the waves, challenging strategic planning and swimming abilities.

Although Kauai tends to appeal to families and luxury travelers, the garden island should also be added to your list of Hawaii surf spots.

Although not as popularized as the awe-inspiring big waves on Oahu, Kauai’s Hanalei Bay has several fun reef breaks along its two-mile stretch that cater to all surfing levels.

Beginners usually start with the forgiving, gentle waves at the pier, but after some practice can move west to the Pavilion.

Intermediates can hang out there or try the tougher waves at the Pine Trees’ beach break in the middle of the bay.

The most difficult section of Hanalei Bay is Waikokos, where the waves are faster and more powerful when they get above four feet.

Generally, as you move from east to west, the waves increase in size and difficulty.

In winter months they can really build in swell, so intermediates or beginners might do better to come offseason, although not during summer when the waves are almost completely flat.

Although these are the best surf spots in Hawaii, and some of the best in the entire world, the endless coastlines make surfing a daily activity on most of the islands.

If you have a board, any beach is likely to lend itself to great surf you’d be hard pressed to find anywhere else in the U.S.