Cleaning your Swiss army knife is a vital part of keeping this handy tool at the top of its game.

Fortunately, it’s not a complicated process to perform on a fairly regular basis to maintain your knife.

So let’s get into it!

What You Shouldn’t Do

Before we dig into what you ought to do for how to clean a Swiss army knife, let’s take some time to address a few things you shouldn’t do.

As a general rule, remember you’re working with a knife, which is sharp.

Even some of the non-knife components can be sharp, so always be careful.

WD-40 is the go-to formula for cleaning almost anything that is metal and has a moving part.

But, for Swiss army knives, it’s not the way to go.

WD-40 is a thick oil, and a Swiss army knife’s components are small and intricate.

WD-40 is too heavy to penetrate all the little nooks and crannies of a Swiss army knife. It’s best to avoid it altogether.

No part of your Swiss army knife is alive, but that doesn’t mean bleach can’t harm it.

Since Swiss army knives are stainless steel, bleach can react with the metal and stain the blades or tools.

In a worse way, bleach can even cause corrosion, which is a far worse fate.

Never, ever put your Swiss army knife in the dishwasher.

Because of the intricacies of a Swiss army knife, a dishwasher cycle is liable to cause issues.

It may even render the knife completely useless, so avoid even taking the chance.

Rust remover may seem like a logical choice, but it’s best to avoid it unless you research that particular brand and how it works with a Swiss army knife.

You should also never use sandpaper to remove difficult grime as it will scratch and harm the metal.

Additionally, if you’re trying to clean out the grit within the knife, never use anything that could scratch the metal.

Things like needles and paper clips appeal to the ability to access small crevices, but they may ultimately harm your knife.

Now that you have an idea of things to avoid, let’s address the appropriate way to clean your Swiss army knife.

Use a toothpick to scrape away any dirt you can.

Toothpicks, or even occasionally cocktail picks, are non-abrasive and thin.

You can use them to take the first pass at any grime that’s accumulated in hard-to-reach areas.

Don’t try to get everything off, just what comes out easily.

After you’ve gotten rid of what dirt you could remove, open up all components of the knife.

If your knife has any USB components or a battery, you will have to remove those before submerging it.

Get a container that’s big enough for the knife and fill it with warm water.

It doesn’t have to be scalding hot, just enough that it’s effective but doesn’t hurt you to submerge a finger in the water.

Soak the knife in water for around thirty minutes. Open and close it underwater.

This allows even more dirt to free up.

The warmth and moisture cause the debris to break down and release from the knife’s layers.

You may choose to use liquid soap as part of the soaking formula.

If you do, only use a couple of drops, and make sure you rinse your knife thoroughly under reasonably hot water before proceeding.

After the knife has had a good soak and rinse, use a gentle cleaning utensil like a cotton swab to rub away more dirt and leftover oil.

A small, soft paintbrush or toothbrush will also work. 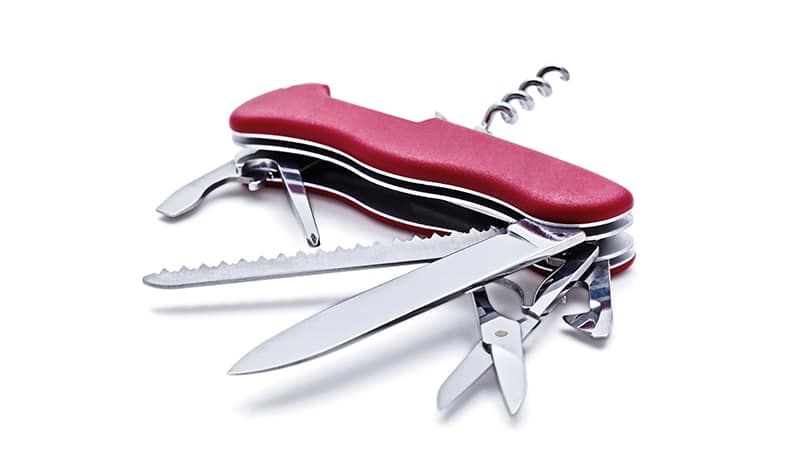 Since the blades and other layers on the knife are metal, you want to be sure to dry it thoroughly, so it doesn’t rust.

Carefully open all the layers of the knife, so everything is exposed.

Use a dry rag to soak up any excessive amounts of water.

For more thorough drying, use a cotton swab to get deeper into the knife’s intricate sections.

If any part of your knife has electric components — you should dry those immediately.

After you’ve cleaned as best as you can manually, you need to let it sit out and dry the rest of the way.

If possible, leave it outside on a bright and sunny day.

This will speed up the drying process and prevent the possibility of rusting.

It isn’t enough to just clean the junk out of the knife; you must oil it.

The official Swiss army knife care instructions recommend their brand of oil to accomplish this task.

However, if you do not choose their oil brand, there are still a few things you must consider when picking an oil:

Once you’ve selected your oil, close up your knife and begin opening each component individually.

Every piece should open with ease. If it doesn’t, apply a little bit of oil to that joint or hinge.

Do this with every part, and use a dry rag to wipe up excess oil when you’re finished.

A Swiss army knife is a versatile and valuable tool, but it requires the proper maintenance.

Cleaning it properly ensures that it will remain in top shape and in good working order for years to come.