Have you found yourself in the unlikely position of having a dent in your HydroFlask stainless steel water bottle?

Maybe it took a tumble down a hike trail or you accidentally ran over it with your vehicle?

Regardless of how you ended up with a dented stainless steel water bottle, we can help you fix it.

Is there a way to get dents out of a Hydro Flask? Yes, and you can undent it yourself.

Keep reading for our tips on undenting that Hydro Flask bottle.

How To Get Dents Out Of A Hydro Flask

There’s a good chance you have most of what you need to remove the dents at home already.

And, there are several ways that you can try to remove a dent from a Hydro Flask. 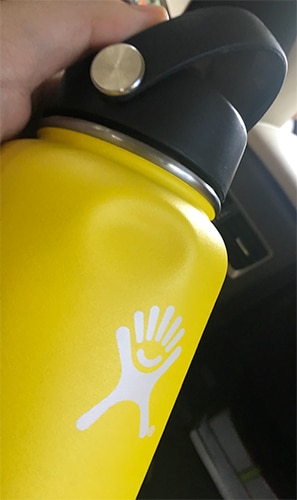 If the dent is minor, then there’s a good chance that a bit of really hot water is all you need to pop that dent out.

One Quora contributor has had success with heat.

If you can I would put a small amount of water in it, cap it airtight it and heat until the water turns to steam—-it may produce enough pressure to push that dent out.

Another way that may work to undent your HydroFlask is popping it in the freezer.

Here’s what another contributor suggests:

Pressurization of the bottle should also pop out the dent. You could try filling the bottle EXACTLY 90% by volume with water and then putting the bottle on its side in the freezer with the air bubble centered as closely as possible on the dent.

If the options above don’t work, then you can buy some dry ice and try another method that should do the trick.

Here’s what you need:

Suggestions from another contributor using the above items:

To fix a dent in a Hydro Flask bottle take a hair dryer and heat the dented spot. Then take dry ice and rub it over the spot to make it cold. Repeat the process until the dent is out. You may also need to encourage it out with some minor force.

Will HydroFlask Replace A Dented Bottle?

Yes, Hydro Flask does replaced dented bottles – but only under one condition.

Did you order the Hydro Flask and have it arrive at your home dented before you even used it?

If the Hydro Flask arrived dented AND you did not use it yet, then you can get it replaced for free under the warranty.

However, if you have used the Hydro Flask bottle, then they company will not replace it – even if it did arrive already dented in.

As mentioned above, the warranty does not cover dents that appear on the bottle after you start using it.

Dents are only covered by the warranty if the new bottle ships to you and arrives with dents.

Although our lifetime warranty does not cover ordinary wear and tear, including dents, scratches, powder coat chips from the flask being dropped, damaged, etc., it does cover manufacturing defects

Do Dents Affect A Hydro Flask?

If you’ve given the bottle a dent after using it, then you might be wondering if dents affect the insulation properties of the Hydro Flask water bottle.

In most instances, the answer to this is “no.”

However, there is a chance that the dent ruptured the vacuum seal and ruined the insulation.

According to a Redditor who experienced this,

It really depends on if the outer layer makes contact with the inner layer. It gives heat and cold a bleed point, rendering the insulation essentially useless.

Why Do HydroFlasks Dent So Easily?

If you’ve managed to dent more than one of these Hydro Flask bottles, then you might be wondering why this keeps happening.

Personally, I’ve had mine for going on five years now and take it everywhere – hiking, planes, international trips, etc. – and I’ve never seen a dent in it.

But the truth is that maybe I’ve just been lucky or more careful than I’ve realized.

The stainless steel that a Hydro Flask water bottle is made out of is actually quite thin, which makes it easy to dent when you drop it or bang it against something.

And since the vacuum seal of the bottle is what keeps it insulated, that pressure is always there and it actually assists in the denting as a result of that inward pressure.

So, don’t beat yourself up if you’ve managed to dent one of these things.

How To Prevent Dents In Hydro Flasks

If you want to prevent dents from appearing in your HydroFlask, then there is an easy (and inexpensive) solution for you.

The company makes these in two sizes and you just slip them on the bottom of your bottle. 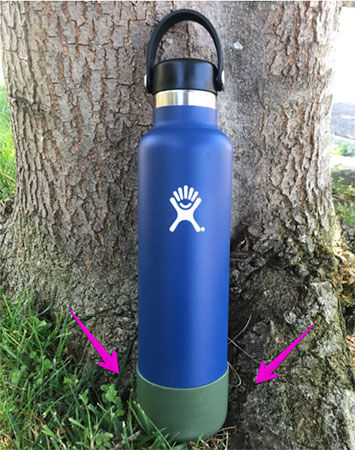 They are made of silicone and designed to add extra protection to your Hydro Flask.

You can customize your look while protecting the bottle against bumps and dings.

If you’ve dented your Hydro Flask, then there are several ways that you can fix it by removing the dents.

And once you get those dents popped out, then it’s a good idea to get a boot for your Hydro Flask water bottle so that you don’t dent it again.

1 thought on “Dented HydroFlask? How To Undent A Hydro Flask”