Kan Jam and disc golf are similar in that they’re both disc-throwing sports/activities played with discs or frisbees.

Both games involve hitting targets, though the targets themselves, rules of the games, and scoring are different.

You might say Kan Jam is the more explosive of the two, and disc golf the more leisurely.

Or you might not. It really depends on how you play.

However you play, Kan Jam and disc golf are both fun, active hobbies that can keep you moving on weekends, rest days, or vacations.

What is Kan Jam?

Kan Jam is a four-player disc-throwing game that involves throwing and deflecting a disc/frisbee into a “can” or plastic cylinder.

Players form teams of two and take turns throwing the disc toward the “can” on the opposite end of the playing area.

Once the disc is thrown, it can either hit or go into the “can” from the throw alone or if it’s off-target, the thrower’s teammate can attempt to deflect the disc into the “can.” 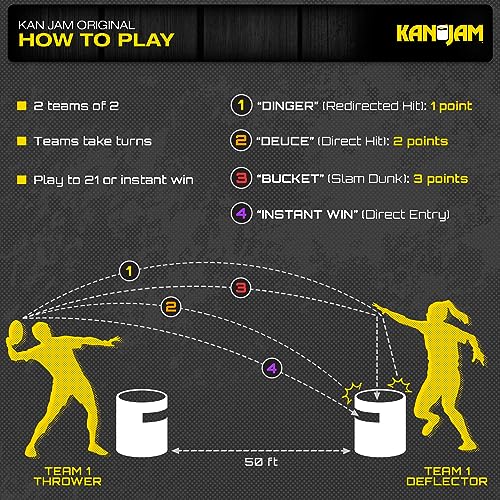 What is disc golf?

Disc golf is disc-throwing game that involves throwing a disc at targets on a multi-target course (similar to traditional golf).

Like traditional golf, disc golf courses are typically nine or 18 targets or “holes” and players take turns throwing their discs toward the target, with the goal of reaching the target in as few throws as possible.

The number of throws each player take to get to the “hole” is recorded and the player with the lowest score wins.

But disc golf can also be played solo with the goal of simply recording a low score.

How are Kan Jam and disc golf different?

Though they both involve hitting targets with a disc, Kan Jam and disc golf are two completely different games with different rules and different scoring.

Kan Jam takes place in a relatively contained area, with all play happening around the two “cans.”

Disc golf takes place over a sprawling course of targets.

Disc Golf has more walking in between “holes.”

Neither activity is better than the other in terms of fitness – they offer very different things – and they have enough in common that we think many people who like Kan Jam will also like disc golf, and vice versa.

One advantage disc golf may have over Kan Jam is that it can played on your own or with a smaller group, which can prove beneficial if you don’t want to wait around for three potential teammates and opponents to make time in their schedules.

Since disc golf and Kan Jam have different forms of play, it’s to be expected they also have slightly different benefits when it comes to health.

The main benefits of disc golf come from the walking involved.

Disc golf courses can be fairly sprawling (kind of like gold courses), so players get a decent walk in with every game.

While there aren’t any official medical studies on the benefits of disc golf, a study by the Professional Disc Golf Association found disc golfers walk an average of nearly three miles per 18-hole round.

The main benefits of Kan Jam come from the bursts of movement involved, especially when attempting to deflect the disc.

Some benefits of this type of rapid movement include:

As you can see, disc golf and Kan Jam target vastly different components of physical fitness.

Disc golf and Kan Jam are both decent exercises.

They are not high-intensity (except for small bursts in Kan Jam), but they do get you up and moving around.

Compared to a leisurely day by the pool, they’re pretty effective.

Compared to a gym workout or a run, they’re merely okay (most of the time).

But while neither disc golf nor Kan Jam are going to replace a workout (except in a few small instances), they are perfect activities for rest days.

Can you lose weight with disc golf or Kan Jam?

Yes, you can lose weigh playing disc golf and Kan Jam. At least some weight.

It really depends on how often you play and how much you put into it.

If you play an 18-hole round of disc golf (walk three miles) every day, you will definitely burn some extra calories.

If you go all-out in Kan Jam, you can burn even more calories in a shorter amount of time.

An intense game of Kan Jam can involve running, jumping, diving, and all sorts of choice acrobatics.

It can be a HIIT exercise if you really want it to be.

But you have to want it.

When it comes to weight loss, it’s important to recognize neither disc golf nor Kan Jam are considered cardio-aerobic exercises in their base forms.

But you can get (and stay) in your fat-burning or cardio zones with either.

It really depends on how much effort you put into the game and how quickly you move.

The calories burned in disc golf are mostly from the walking, so you won’t expend many more calories than you would burn on a long walk.

On average, a disc golfer around 150 pounds can expect to burn between 300 and 400 calories per game.

The calories you burn in Kan Jam are mostly from the bursts of motion while trying to deflect the disc and the after-burn of these movements.

You can increase calorie burn by moving even when you are not attempting to throw or deflect the disc and by using fast, powerful movements when you are trying to deflect.

If you get your heart rate up during moments of deflection and aim for a steady, elevated heart rate (by running in place, for instance) while waiting for your next turn, you can really increase your calorie-burn.

An intense game of Kan Jam can be much like agility training, burning upwards of 500 cal./hr. for many players, while a leisurely game may burn less than 200 cal./hr.

It really is a matter of effort.

Can you build muscle playing disc golf or Kan Jam?

Putting on muscle from disc golf or Kan Jam is highly unlikely.

But commit fully to your Kan Jam game or find a good, hilly disc golf course and you will definitely tone a few of them.

What muscles do you use playing disc golf or Kan Jam?

Though the main action in disc golf and Kan Jam is largely upper-body focused – throwing in disc golf, throwing and deflecting in Kan Jam – both of these disc sports are actually full-body activities.

In disc golf, you use the following muscles (assuming you play on an actual course):

Depending on your stance and the style of your throw, you may also get engagement in your glutes, and you will definitely engage your glutes if you are on a hilly course.

In Kan Jam, you use the following muscles:

With Kan Jam, which muscles you engage really depends on how crazy you get, though.

The more twisting and lunging you do, and the faster your pace, the more and the deeper the muscles you’ll use.

Perhaps, the best thing about disc sports like Kan Jam and disc golf, besides the fact they’re fun, is that they are easy to get started with for most people.

The actions are basic, the rules uncomplicated, making them easy to learn, and they are both fairly inexpensive.

Kan Jam does take a little more physical mobility than disc golf, but it’s also more accessible because, at its fullest, disc golf requires a course.

How to Play Kan Jam

Kan Jam is a self-contained kit that comes with directions.

The best place to learn to play Kan Jam (we think) is from the creators themselves.

To learn to play Kan Jam, check out How to Play on the Kan Jam official website.

How to Play Disc Golf

To learn to play disc golf, we really like this video from Ninh Ly:

The Rules of Disc Golf - EXPLAINED!

And, if you want to be well-versed in the rules of disc golf, you can find them at the Professional Disc Golf Association’s Official Rules of Disc Golf.

Where To Buy Kan Jam

Once you’re familiar with the rules of Kan Jam, all you need is a set. Here are some places you can buy one:

Where To Buy a Disc Golf Starter Set

Once you’re familiar with the rules of disc golf, all you need is to find a disc golf course near you and get a decent disc set.

When it comes to discs, make sure you buy an actual disc golf set.

Disc golf sets include at least three discs, a driver, a mid-range, and a putter, with different weighting and design that gives you more control over your throws at different stages of a course.

Here are some disc golf sets we like for beginners:

You can buy disc golf sets with more discs that offer a wider range of throwing options, but we think three discs is ideal for beginners to get a feel for the game.

When dressing for Kan Jam or disc golf, these are the most important factors to keep in mind:

Generally speaking, most people will be comfortable playing disc golf or Kan Jam in shorts/leggings/athletic pants, a non-cotton shirt, and a good pair of athletic shoes. (Though some people do view disc golf as a “proper” sport and dress in nicer shorts/khakis and collared shirts.)

If it’s sunny, you may also want a hat with a bill, which makes it easier to see the disc and goals in either game.

If it’s been rainy in the days before you play, water-resistant shoes are ideal, because grassy areas tend to hold moisture. (This is especially true on shaded areas of disc golf courses.)

In disc golf, you should also always cover your lower legs, either by wearing full-length pants or tall socks.

This will help protect you if your disc goes off-course and you end up having to retrieve/throw it from the “rough.”

Covering your lower legs especially important during warmer seasons when ticks and poison ivy/oak are plentiful.

Why Disc Golf or Kan Jam?

Disc golf and Kan Jam are games first and foremost, which, for most people, translates as fun.

While you won’t get the same workout you would get in a gym with either one, both offer pretty decent workouts.

If you want to create a fitness routine you can stick to long-term, it’s essential to find activities you enjoy that keep you moving even when you don’t feel like working out.

Kan Jam and disc golf are perfect active hobbies that can get you up, get you outside, and get your body in motion.

Need some motivation to give it a whirl? Check out Get Spinning With These Frisbee Quotes (+ Disc Golf Quotes).