All of that whizzing past in a blur as you slice across the waves.

What names do you think of when it comes to jet skis or personal watercraft (PWC)?

Is it Kawasaki? Sea-Doo? Yamaha?

If so, you are pretty much on the pulse of the industry.

Kawasaki, Sea-Doo and Yamaha manufacture the vast majority of personal watercraft made and sold all over the world.

These three companies have earned their popularity and reputations by producing some truly great watercraft, and all three make high-end, performance jet skis which can achieve close to 70 miles per hour on the water.

But, if you’ve landed on this page, you’re not just looking for fast.

You’re looking for something truly special. While Kawasaki, Sea-Doo, and Yamaha certainly have their players in the game (and are the only high-speed jet skis available in the American market), none of them are the leader in jet ski speed.

That honor goes to a European company that offers only one model of PWC.

But one is all you need when you manufacture the fastest jet ski in the world. 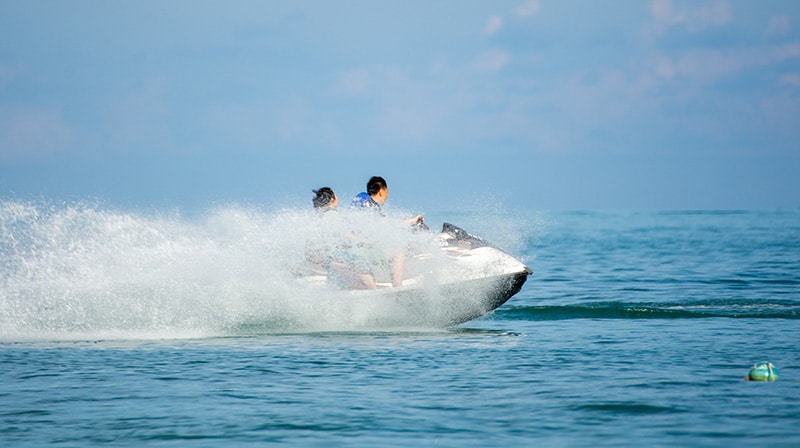 The Fastest Jet Skis in the U.S.

The fastest jet ski in the world isn’t available in the North American market, and, after three years in production, it’s looking less and less likely that it ever will be.

However, the big three PWC manufacturers make top-of-the-line jet skis for the U.S. market that will get you wherever you want to go in a hurry.

When it comes to the U.S. market, Kawasaki is the speed leader.

That stands for horsepower, giving the Jet Ski Ultra 310X the same horsepower as a base Ford Mustang, and more horsepower than a base Charger, Challenger, or Camaro.

Those horses inside the hull and that powerful thrust propel the Kawasaki Jet Ski Ultra 310X at up to 70 mph under perfect conditions.

Of course, conditions are never perfect, and most riders find their speeds topping out somewhere right between 65 and 70 mph.

Still, you won’t find a faster machine in the U.S.

Kawasaki may be the speed leader, but its competitors don’t lag far behind.

Sea-Doo’s top performance models, the Sea-Doo RXP-X and the Sea-Doo RXT-X, both feature a supercharged 300-horsepower engine that can reach speeds up to 69 mph.

While that 300-hp engine won’t put you on par with a Mustang or Challenger, you’ll still outstrip a Charger or Camaro.

The difference between the two models of Sea-Doo is exclusively in design.

The RXP-X is built for two. The RXT-X holds three people with a little more space and comfort.

Despite its smaller rider capacity, the two-seater RXP-X is the heavier of the two by about twenty pounds, and would logically be slower if not for the hull.

But the hull makes all the difference.

Simply put, the RXT-X’s hull is built for stability in the water, while the RXP-X’s hull is designed for making the most of its powerhouse engine.

As such, the RXP-X edges out the RXT-X when it comes to top speed.

It’s more capable of reaching that 69 mph under ideal conditions, while the RXT-X actually tops out a couple of miles per hour lower.

In real-world conditions, you can expect 65 mph out of either model without much effort.

Yamaha doesn’t highlight the horsepower in its GP1800 R SVHO.

Probably because, if they did, it would make them sound a good clip behind the competition.

The GP1800 R SVHO’s 250 horses may not elevate it to the realm of muscle cars, but they do still outpace a Jaguar XE or Lexus RC Turbo.

Still, there’s no denying the Yamaha engine has less oomph than its competitors.

So, how is it that the Yamaha GP1800 R SVHO manages to be just as fast as the fastest 300-hp Sea-Doo on the water?

It’s light, that’s how. Weighing in at about 70 pounds less than the Sea-Doo RXP-X, the GP1800 R SVHO doesn’t need as much thrust to make it go places.

And, like the Sea-Doo RXP-X, it’s designed to use what engine it has to the utmost.

What that means in actual performance is that it reaches speeds almost exactly on par with the top models of its closest competitors.

When pushed to the limit, it might top out a little bit lower than the Jet Ski Ultra 310X or the Sea-Doo RXP-X, but as far as everyday riding goes, you’re just as likely to see those 65 and 67 mph blips on the speedometer. (And, if you listen to Yamaha PWC enthusiasts, you’ll do it a lot more smoothly.)

The Fastest Jet Ski in the World

Any of the fastest jet skis in the U.S. are going to give you a thrilling ride.

So thrilling, in fact, these high-octane PWC are better off handled by experienced jet skiers than by beginners.

But none of them are the fastest production jet ski in the world.

Featuring a 320-hp turbocharged engine, the Belassi Burrasca sports the most power of any PWC, and comes in nearly 200 pounds lighter than the Jet Ski Ultra 310X.

What happens when you combine 10 extra horses with a lighter weight in a machine designed for high-speed performance?

But both tests and real-world riding have shown the Burrasca easily pushes the needle above and beyond that number with some frequency, blipping 82 or even 83 mph hour in calm waters.

Lead developer, Nico Lasselsberger, has this to say about Belassi’s singular personal watercraft:

Timeless elegance isn’t really in our wheelhouse, so we’ll just say this about it –

How to Make a Jet Ski Faster

If you don’t see a Burrasca floating into your life any time soon, and wish you could put a little more speed behind the PWC you already own, there are mods you can do.

An aftermarket speed override kit is the first step.

Installing an override module removes the factory speed settings (note: limits) from your PWC, instantly increasing the speeds your jet ski can reach without any additional modifications.

But additional modifications will help.

After-market impellers and power filters improve acceleration and performance, while racing kits have the potential to get the fastest PWCs in the American market close to that 80 mph reached by the Burrasca. (Racing kits are meant for professional, racing purposes only.)

Before you go crazy outfitting your jet ski for speed, just keep in mind mods done to your PWC will most likely void the warranty.

Mods will also change the way your craft handles.

We don’t recommend modding your jet ski unless you’re a racer who rides on a closed-track.

Even then, mods should be performed with extreme caution.

For now, here’s the Belassi Burrasca in some sexy scenery for inspiration –