Riding a bicycle is, perhaps, the most relaxed form of exercise there is.

It’s lower impact than walking or running and, therefore, easier on your body.

It can carry you long distances and serve as transportation through a hectic, gridlocked world.

Despite the effort it takes to make a bicycle move, many people consider bike riding a beloved form of fun and recreation, less of a workout and more of an escape.

That’s why bikes can be found for rent in parks and near beaches, places where people go to relax and unwind.

The point is, most cyclists don’t need much motivation to push off and pedal.

But, if you’re new to cycling for fitness or a little hesitant to climb aboard your bike, these cycling motivation quotes will give you all the encouragement you need. 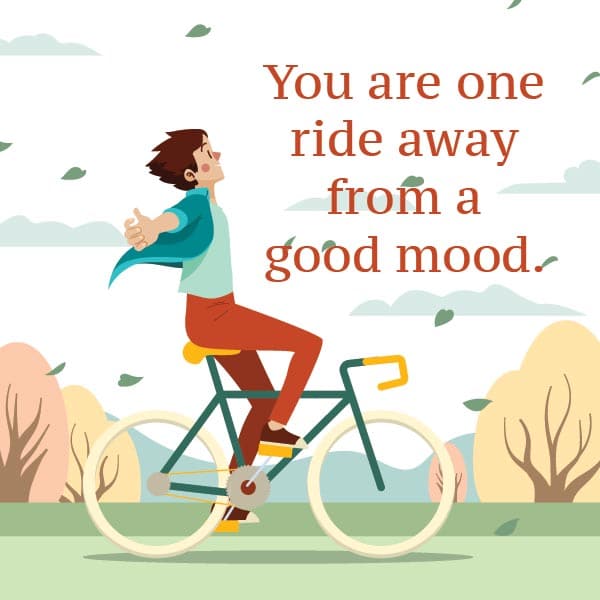 2. Nothing compares to the simple pleasure of a bike ride. – John F. Kennedy

3. Ride as much or as little, or as long or as short as you feel. But ride. – Eddy Merckx (cyclist)

5. Every time I see an adult on a bicycle, I no longer despair for the future of the human race. – H.G. Wells (author)

6. Nature loves bicycle because no harm to nature comes from the bicycle. – Mehmet Murat Ildan (author)

7. When man invented the bicycle he reached the peak of his attainments. Here was a machine of precision and balance for the convenience of man. And (unlike subsequent inventions for man’s convenience) the more he used it, the fitter his body became. Here, for once, was a product of man’s brain that was entirely beneficial to those who used it, and of no harm or irritation to others. Progress should have stopped when man invented the bicycle. – Elizabeth West (author)

8. Riding a bicycle is the summit of human endeavour – an almost neutral environmental effect couples with the ability to travel substantial distances without disturbing anybody. The bike is the perfect marriage of technology and human energy. – Jeremy Corbyn (British politician)

9. The invention of the bicycle has done more to promote human happiness than all the philosophy ever written. – Marty Rubin (philosopher and author)

10. The bicycle, the bicycle surely, should always be the vehicle of novelists and poets. – Christopher Morley (author) 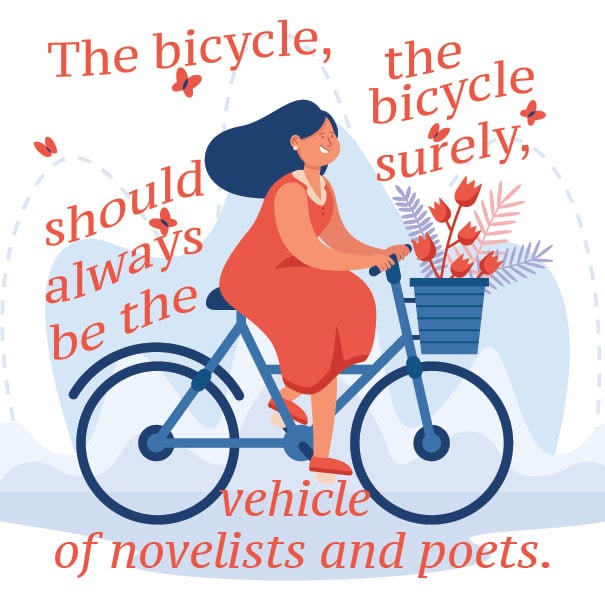 11. You know, bicycling isn’t just a matter of balance… it’s a matter of faith. You can keep upright only by moving forward. You have to have your eyes on the goal, not the ground. I’m going to call that the Bicyclist’s Philosophy of Life. – Susan Vreeland (author; from her novel Clara and Mr. Tiffany)

12. Ever bike? Now that’s something that makes life worth living! Oh, to just grip your handlebars and lay down to it, and go ripping and tearing through streets and road, over railroad tracks and bridges, threading crowds, avoiding collisions, at twenty miles or more an hour, and wondering all the time when you’re going to smash up. Well, now, that’s something! And then go home again after three hours of it… and then to think that tomorrow I can do it all over again! – Jack London (author)

13. One of the beauties of cycling is that pedaling alone on a long, empty road allows a lot of time for protracted and uninterrupted trains of thoughts. – Chris Hatherly (cyclist and author)

14. The bicycle is the most civilised conveyance known to man. Other forms of transport grow daily more nightmarish. Only the bicycle remains pure in heart. – Irish Murdoch (author)

15. The bicycle saves my life every day. If you’ve ever experienced a moment of awe or freedom on a bicycle; if you’ve ever taken flight from sadness to the rhythm of two spinning wheels, or felt the resurgence of hope pedalling to the top of a hill with the dew of effort on your forehead; if you’ve ever wondered, swooping down bird-like down a long hill, if the world was standing still; if you have ever, just once, sat on a bicycle with a singing heart and felt like an ordinary human touching the gods, then we share something fundamental. We know it’s all about the bike. – Robert Penn (author)

16. To ride a bicycle is in itself some protection against superstitious fears, since the bicycle is the product of pure reason applied to motion. Geometry at the service of man! Give me two spheres and a straight line and I will show you how far I can take them. Voltaire himself might have invented the bicycle, since it contributes so much to man’s welfare and nothing at all to his bane. Beneficial to the health, it emits no harmful fumes and permits only the most decorous speeds. How can a bicycle ever be an implement of harm? – Angela Carter (author) 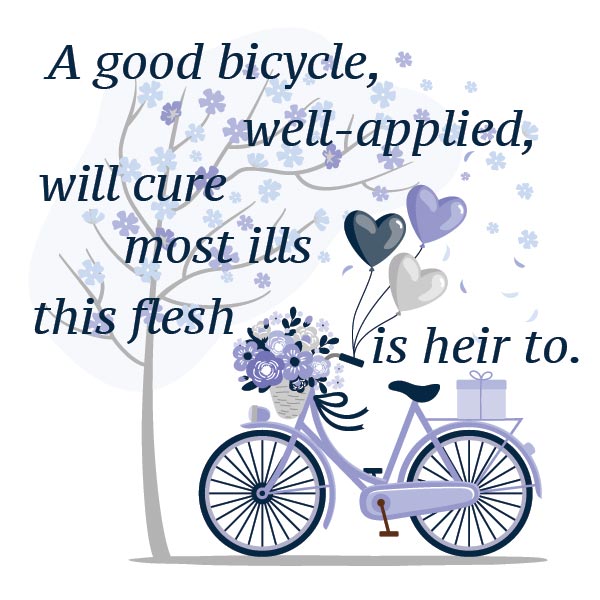 18. Belief in yourself and your cycling goals is the ignition switch that gets you off the sofa and onto your bike. – Felicity Luckey (fitness guru and author)

19. Embrace your sweat. It is your essence and your emancipation. – Kristin Armstrong (cyclist)

20. You don’t know how good you are until you actually get out on a bike and get riding. – Laura Trott (cyclist)

21. Bicycling is a big part of the future. It has to be. There’s something wrong with a society that drives a car to work out in a gym. – Bill Nye (Science Guy)

22. The bike does this; it is an apotheosis of self-sufficiency, in which a well-loved machine will unhesitatingly and quietly mediate intentional being into momentum. As you ride a bike and start to ride it well, there are moments when it becomes an affirmation of life devoid of separation and distinction; you ride through the earth unthinkingly rather than across it. There is no need to account for who you are in others’ terms, in language, even. Your characteristics give way to your being. The effort put into the bike can take you out of your socialized, represented self into what Heidegger called ‘disclosing self’, where you simply are ever-shifting endeavour. – Robin Holt (author) 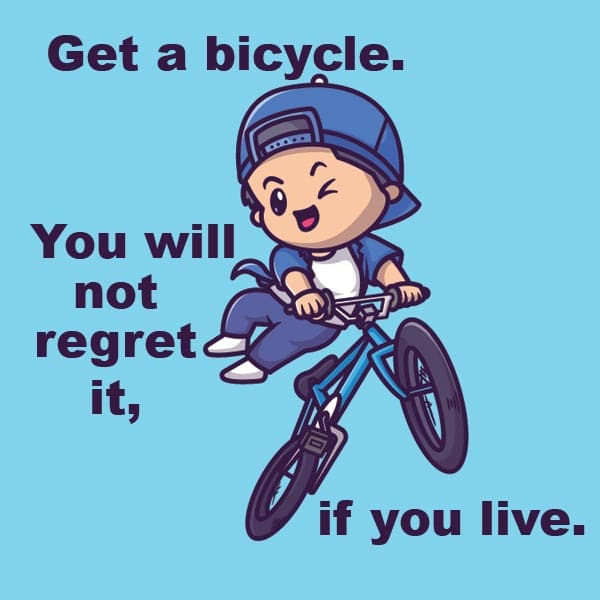 25. The bicycle is just as good company as most husbands and, when it gets old and shabby, a woman can dispose of it and get a new one without shocking the entire community. – Ann Strong (writer)

26. What’s with these recumbent bicycles? Listen, buddy, if you wanna take a nap, lie down. If you wanna ride a bike, buy a fucking bicycle. – George Carlin (comedian)

Want more yuks with your cycling content? Check out Bike Puns To Give Cyclists The LOLs.

Just getting started with cycling? Check out our beginners guide – Getting Started With Cycling (Cycling For Beginners).