With the proliferation of rental companies at many of the world’s top beaches, getting on a jet ski is fairly easy to do.

If you’ve never ridden a jet ski before, though, it can be a little intimidating.

You have hundreds of pounds of machine beneath your butt and might wonder how dangerous, difficult, or hard to learn it will be.

There’s no denying riding a jet ski is different than riding other engine-powered vehicles. But once you understand the basic functions, you’ll find jet ski riding can be a fun, safe way to spend a day out on the water.

That means, instead of propellers to displace the water and move you forward as in a traditional boat, a stream of water pushed out of the back of the jet ski propels the craft.

This same water stream is used to steer.

When a driver turns the handlebars, the jets in the back of the jet ski change direction, altering the trajectory of movement. 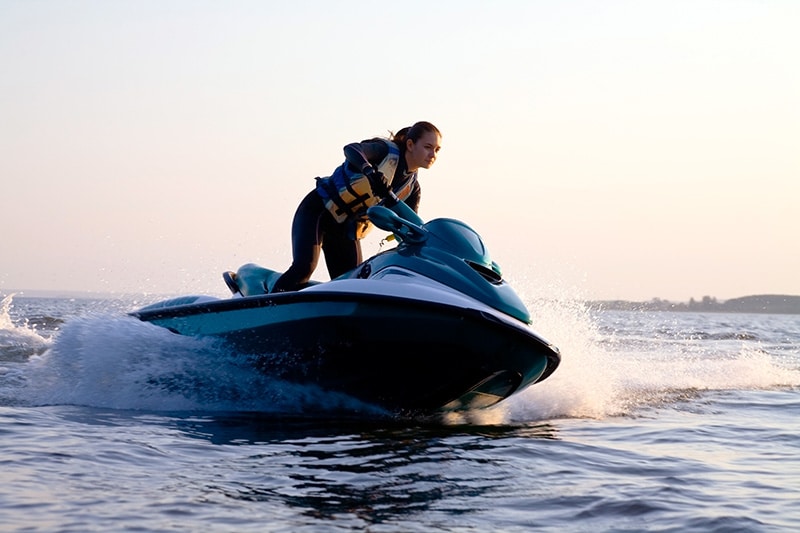 The Operational Parts of a Jet Ski

While you don’t need to know how a jet ski works in order to ride one (here’s an article on How Do Jet Skis Work if you do want to know), jet skis have a few parts riders should be somewhat familiar with before climbing aboard.

These four parts of a PWC are all you need to control the craft.

But you should also be aware of the nozzle on a jet ski, which is the big pipe at the back where the water shoots out.

The nozzle is the most dangerous part of a jet ski because water expels from it at such high speed, producing hundreds of pounds of force.

This force can cause severe injury if a rider lands in the path of the jet stream.

But it’s essential to know there are parts of a jet ski that are inherently dangerous.

Are Jet Skis Easy to Ride?

Jet skis are not complicated to control, but they do handle differently than other engine-powered crafts.

Compared to a boat, jet skis are pretty easy to operate.

They are easier to board, whether from a dock or from the water, and have fewer controls to learn.

Jet skis are also smaller, which makes them easier to steer around obstacles and quicker to turn than larger watercraft.

Since jet skis are smaller, they are easier to capsize though, especially in large waves.

But, as far as actual operation, jet skis are pretty easy to drive.

For the most part, you simply turn it on, give it some throttle and use the handlebars to steer.

The most difficult aspect of driving a jet ski is that the propulsion is linked to the steering.

Basically, if you aren’t giving a PWC any throttle, you can’t steer it.

This can be a difficult thing to get a handle on if you’ve never ridden a PWC before, and it is often instinct to let off the throttle when you really need to keep it pressed.

Practice will help you overcome this instinct, and you should get a lock on it before heading out to open waters or hitting top speeds.

How to Drive a Jet Ski

Now that you know the basic components and challenges of riding a jet ski, it’s time to learn how to drive one!

First up, how to get on.

How to Mount a Jet Ski

Mounting a PWC from the shore, a dock, or another watercraft (like a boat) is fairly easy.

It just requires a bit of balance and no dawdling.

The keys to mounting are to engage your core, keep your body weight centered over the jet ski, and not to linger on one side of the jet ski.

Putting too much weight on one side can cause the jet ski to capsize.

When boarding a jet ski from shore, it’s also essential to make sure you have enough clearance before climbing on.

Since a jet ski sucks in water when it starts up, it needs several inches of water clearance.

For most riders, this means pushing the jet ski out into at least knee-deep water (if you’re short, you might need to go to mid-thigh) before climbing on.

You can still mount the jet ski from the side back, but if it feels unstable, try mounting from the back instead.

This keeps the jet ski more balanced in the water.

Once on the PWC, situate your feet in the footrests so your legs are engaged but comfortable and grasp the handlebars.

Move backward or forward on the seat until you have a good position for your arms and feet.

If riding with passengers, the driver should always board the PWC first.

How to Reboard a Jet Ski

Ideally, you won’t fall off a PWC or capsize it while riding it.

However, it can happen and there are less dire reasons you might want to climb off a jet ski for a while.

If you want to go for a swim while out on a jet ski, just make sure you shut the jet ski off completely before disembarking.

To get back on, go to the back (or the stern) of the jet ski and crawl onto the platform.

Jet skis are designed with handles on the backs of their seats to help with re-boarding in deep water.

Again, when remounting a jet ski, the driver should always board first.

How to Start a Jet Ski

Before turning on a jet ski, look around to make sure no swimmers or other watercraft are near your PWC.

Plug in the ECOS (engine cut-off switch) if it’s not already plugged in and attach the lanyard to your wrist or personal flotation device (PDF), depending on your preference. (As of April 1, 2021, the U.S. Coast Guard requires all PWC drivers use their ECOS with lanyard.)

Turn on the engine and, if the jet ski doesn’t start drifting forward on its own, gently press the throttle just enough to carry you away from the shore, dock, or boat.

Until you press the throttle, you won’t be able to steer, so make sure you have some clearance from a dock or boat before turning a jet ski on.

Also follow the no-wake zone laws wherever you are.

This will inform you of how far you must be from the shore, dock, or other watercraft before engaging the throttle.

How to Steer a Jet Ski

As soon as you press the throttle of a jet ski and produce some propulsion, you will be able to steer.

Start out at a slow, comfortable speed to get a feel for how sensitive the throttle is and how the PWC reacts to movements of the handlebars.

Practice slowing down and stopping by letting up on the throttle.

Remember, if you release the throttle entirely, you will lose your ability to steer.

Once you get a feel for how the PWC handles, you can pick up a little speed and head for deeper waters.

How to Turn on a Jet Ski

Turning a jet ski is just like turning a bike.

Put slight pressure on the handlebar on the side you want to turn toward while giving the jet ski throttle.

The more you accelerate into the turn, the faster the turn will be, but the more likely you are to lose control of the craft or even capsize.

When turning, always lean into the turn. This goes for both the driver and any passengers.

This will ensure the craft turns as you want it to, instead of skidding in the back, which can cause the craft to roll or capsize.

It’s a good idea to practice several turns at low speed until you know how the PWC handles and get a feel for how to shift your weight to turn smoothly.

Keeping a good distance from other watercraft is the best way to avoid collisions on a PWC.

But there may be times when another craft crosses your path, or you misjudge your own path, making it necessary to steer clear of an accident.

If you find yourself at risk of colliding with something on a PWC, your instinct might be to release the throttle.

While this will slow you down the most rapidly (unless you’re on a PWC with a brake), in most instances this is the last thing you want to do.

As stated above, when the throttle on a jet ski is not engaged, there is no way to steer the craft.

Instead of dropping the throttle, you need to let up on the throttle as you continue to steer the craft out of the line of collision.

If it becomes obvious a collision is inevitable, jump off the side of the jet ski if it’s possible to do so safely (never jump off the back), and move away from the PWC.

Whether a jet ski is going to roll over or hit something, it is always safer not to be on it when it does.

The basic rules for riding a jet ski are the same as those for small boats.

Riding a Jet Ski for Fun

Jet skis are not dangerous crafts, not when ridden properly, but they do have the potential for danger.

To avoid issues and to make the most of your time on the water, don’t try pushing a jet ski to its limits.

Especially your first time out.

Just enjoy your time on the jet ski and get used to the way a PWC maneuvers before trying to hit top speeds or perform any tricks.

Remember, a tiny percentage of jet ski riders are professionals.

Everyone else is just having a good time.