If you are just becoming familiar with kneeboarding, you might wonder what tricks you can do with the sport — or if it’s even possible while kneeling in the water.

Here is everything you need to know about kneeboarding tricks.

Kneeboarding is a water sport wherein you ride behind a boat by a towline, using a special board to skim over the water.

It is called kneeboarding because of the stance the rider takes: kneeling on the board and facing straight forward.

To stay secure, the rider has a special strap that passes over their knees.

This keeps them in place while riding and doing tricks but lets them free their legs if they fall into the water.

Is It Hard To Do Tricks While Kneeboarding?

Some people think that you can’t do tricks while kneeboarding.

However, it is possible to do tricks while kneeboarding!

The difficulty of the tricks varies widely. 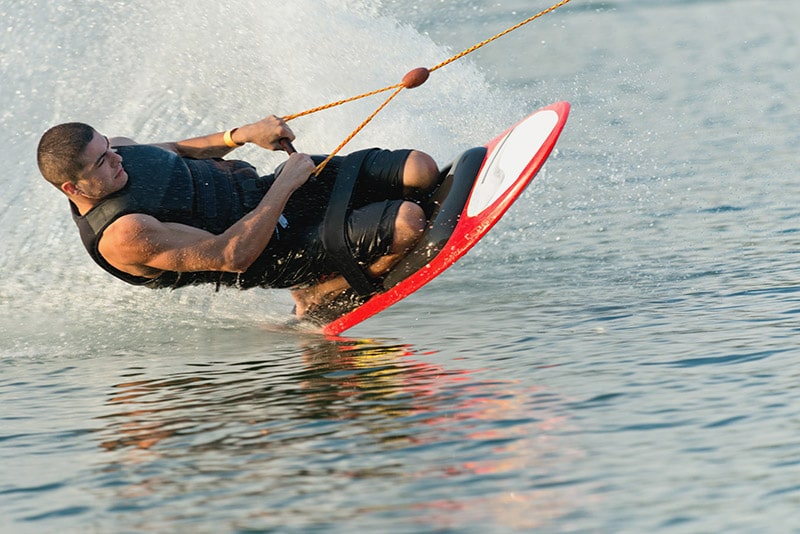 Some are considered basic and need almost no practice at all once you learn the fundamentals of staying upright on the board.

But with practice, you can master any of these and turn your next outing on the water into an adventure.

Top Tricks You Can Do While Kneeboarding

There are quite a few tricks you can do while kneeboarding.

These involve not only the board itself but also the towline and the wake of the boat.

Learning how to manage each of these elements will help you become a master with enough practice.

Before you start trying tricks, make sure you are practicing proper water safety.

Always wear the correct safety equipment while kneeboarding, including a life preserver.

To be extra cautious, make sure you have another person with you aside from the driver of the boat.

This will ensure that prompt action can be taken if you fall or are injured.

The Surface 180 is considered one of the most basic kneeboarding tricks — so much so that you can practice it on dry land before hitting the water!

This might seem ridiculous, but it is a good way to help form your muscle memory.

To do a Surface 180, start in your basic kneeboarding position, facing forward.

Turn your head toward your shoulder in the direction you want to spin.

Then pull the towline to your hip on the other side.

This will let you spin backward 180 degrees.

Hold the position briefly, then repeat the trick in the opposite way to return to the forward position.

The 180 Back, also known as the Wake Back, can feel disorienting at first.

This is because you will strike the wake facing forward, then landing facing backward.

The trick is to rely on your center of gravity to keep you leaning forward and staying low.

To do this trick, cut the rope gently toward the wake.

Then as you approach it, pull the towline sharply.

As you pass over the top of the wake, turn your head toward the shoulder facing the boat while tugging the rope toward your hip on the other side.

To stick the landing, hold your stance with your head turned back toward the wake.

After landing, you can relax and let the towline move you back into a forward-facing stance.

The 180 Front or Wake Front is simply the opposite of the previous trick.

This may also make you feel like you are going to fall since you will go backward over the wake and land facing forward.

Many people find this disorienting the first few times they do it!

Just as with the 180 Back, your center of gravity is what will keep you steady.

To do this, start outside the wake. Leave yourself a good amount of space.

Cut sharply toward the wake.

As you approach it, turn your head to face the shoulder facing the boat while pulling the rope to your hip on the other side.

The goal is to hit the wake backward.

Make sure to hold your stance to stick the landing.

Then return the rope to your opposite hip to turn your body forward once again.

Once you complete the trick, keep yourself upward by straightening your back and planting your elbows by your hips.

Turning is another very basic trick that you will master in no time.

All you need to do is gently lean your upper body in the direction you want to turn.

Don’t do this too strongly or you are likely to fall.

Continue to hold your arms straight out in the direction of the boat.

When you have completed the turn, lean slightly in the opposite direction to correct your angle and work yourself back into an upright position.

Jumping the wake might look difficult, but you can master it with just a bit of practice.

To accomplish this trick, you will need to work yourself outside the wake so that you are closer to the side of the boat.

To start, cut the rope sharply to exit the wake.

You’ll want to get as much space from the boat as possible.

When you’ve reached the right point, cut the rope back toward the wake as hard as you can.

When you get close, start to lean back.

This extra tension will propel you up and over the wake and into the air.

Depending on how hard you hit the water, you will either land in the wake or on the other side of it.

Be prepared for the landing!

The Surface 360 is a more intense spin that, as you can probably guess, takes you in a full circle.

The trick to accomplishing this is to build up momentum.

Start by building up your speed.

To do this, rotate first in the direction you want to spin, then back in the opposite direction.

This essentially helps you “wind up” for the spin.

On the third rotation, release the rope from the hand in the direction you are spinning.

So, if you are spinning to the right, release your right hand.

As you complete the spin, reach behind your back with your right hand and pull the grip with both hands.

This will pull you back into a forward-facing stance.

Once you are facing forward again, straighten your back and hold your arms out straight to ensure that you stick the landing and remain steady.

This oddly-named trick — also called the Side Slide — is a fairly simple one.

The goal is to turn your board on its side and coast on the surface with your body parallel to the surface.

The tricky part is achieving the slide with a lower center of gravity, as necessitated by the stance of kneeboarding.

To start, you will want to cut the rope to one side to exit the wake.

Then cut the rope back toward the wake.

When you approach the edge of the wake, release the tow rope from your front hand.

Lean back, shifting your weight backward.

The goal is to push the back of your board into the wake.

At this point, you should be able to shift the board into the Side Slide position.

Take care to distribute your weight as evenly as possible.

To steady yourself, pull the handle of the rope down and toward your hips.

You have probably heard this trick mentioned in reference to BMX riding or skateboarding.

It is very similar.

The goal is to jump your board up in the air without using the wave to propel yourself.

Although this trick is well-known, it is also fairly simple.

The trick is to pull the tow rope sharply while pushing down with your knees.

Then you immediately pull your knees up as hard as you can.

If you achieve the right combination of tension and propulsion, you can “jump” your board above the water.

The Wake 360 Front-To-Front is a complicated trick that takes a lot of practice.

The challenge lies not only in the technical aspects of the trick, but also in perfect timing, balance, and the ability to hold the tow rope with only one hand.

This trick can also be a bit disorienting as you start since you will be spinning very quickly.

Needless to say, it may take many times practicing before you perfect it.

To start, position yourself in the middle of the wake directly behind the boat.

Alternating hands, pull the tow rope so that you move closer to the boat.

Once you have collected roughly six feet of rope, coil the excess up in one hand and keep it positioned at your pelvis.

When you are ready, release the other hand holding onto the rope.

It will spin you in a full circle as it tightens from the tension of the boat until you are holding just the handle again.

The olé is a simple trick that relies simply on your ability to ride behind the boat while holding on with one hand.

First, use hand-over-hand to pull yourself closer to the boat.

When you have accumulated roughly six feet of slack rope, hold on with one hand.

Use the other hand to swing the rope handle up and behind your hand as though you are swinging a lasso.

The backroll is an extremely challenging trick with plenty of ways to go wrong.

However, that means that once you master it, you can say with confidence that you are a master of kneeboarding tricks.

The main difficulty of the backroll is that it requires highly precise timing.

The goal is to get your board on the very edge of the wake and maintain your position there so you can ride it.

You need great balance to both achieve and maintain this stance.

To start, move out of the wake toward the side of the boat.

Then cut hard toward the wake.

At the last moment, correct your grip so that you straighten out, balancing on the edge of the wake rather than entering it again.

This requires you to resist, meaning that you keep yourself from going back into your original position.

This can be a great physical challenge.

The best way to resist is to angle your shoulders in the direction of the backroll while turning your head in the opposite direction and guiding the handle of the tow rope to your hips.

This will pull you in a small circle as you complete the trick.

Common ways to bungle this trick include incorrect timing, cutting too hard or not hard enough, poor positioning of the arms, and leaning forward.

It isn’t very different from a front flip performed on solid ground.

If you can do one on land, you will likely have no problem doing it in the water — although it might seem difficult.

The trick depends on a good sense of balance and using the wake to propel yourself into the air.

To start, you will need to exit the wake and then cut hard back toward it.

As you cross over the edge, flatten out (that is, stop cutting the rope) and use the momentum to throw yourself forward.

Hold on tight to the rope handle but make sure it stays positioned by your hips.

As with any other sport, practice is the key to nailing these tricks.

As time goes on, you will feel more confident in your balance and agility.

You may need to practice some tricks over and over, but with enough time and effort, you’ll become a master of kneeboarding.