There is an array of hockey sticks from different companies, and each stick has its distinctive qualities.

In choosing a hockey stick, it will highly depend on its attributes that fit your playing style, abilities, and position.

Also, the decision on the type of material for your stick is critical and it can either be composite or wood.

Unlike wood that easily breaks, composite sticks come in a range of stiffness’s that players can use in improving the force and speed of their shot.

So how do you measure the qualities of a hockey stick?

Most of the sticks flex number ranges from 40-110 or more.

The flex is related with the length of the stick, and it becomes stiffer as you bend the rod down.

An example is if you want an 85 flex hockey stick, cut it down to an inch or two will increase its stiffness so much that it might not be the proper stick you need as a player.

The flex of a stick highly determines the puck speed and accuracy of as shot.

It’s important to note that, the amount of flex can negatively affect the power and precision of a shot or improve it.

Hockey stick manufacturers have placed a gauge on the stick with markings that assist you in the new stiff number when you cut down at the various points.

Weight amount applied to bend the shaft by an inch will depend on the body weight of the player.

For youth to flex 30 they will need to use a load of 40-60 lbs, while for an older player with over 200 lbs will stiff over 100 flex to achieve the right power and accuracy for a shot.

A player who is more massive and taller will require a higher stick with higher flex, and this means it has less elasticity as compared to the shorter flex sticks that have a higher elasticity. 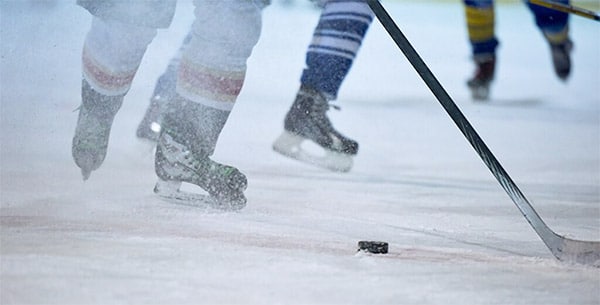 Size Of The Stick

What should be the right size of your hockey stick?

Coaches and experienced players have conventional wisdom, and they tell you that the shaft of the stick should reach between your noses and chin while being held upright, touching the ice and when wearing your skates.

Hockey sticks are usually in four sizes; youth, junior, intermediate and senior and for every size, each stick reflects the softer flex and lesser shaft circumference.

The player will determine the length of the stick.

Some will cut them at the handle if they prefer to grip them close to their body while some defensive players will prefer the longer ones for easily reaching their opponents.

Whenever a player feels the need for a longer stick due to their growth in the body or in changing tact, there is the option of adding a but- end at the shafts end to elongate it.

One of the variables for a stick is the curve and the twist of the blade also known as the blade pattern.

Curves are angled either towards the mid blade, curve or heel.

Blade lie refers to the angle the stick shaft will take when the blade sits flat on the ground.

Players prefer to a stick with a pattern of their choice, and it includes the sticks lie.

Having a lie that is large or small may factor at what length you would cut your stick.

Large lies will put the puck farther away from your body as to smaller pucks that allow the puck to handle much closer.

Lies are measured in numbers usually from 4 and 7 and the more the stick is handled upright, it corresponds with the large number.

For a typical hockey stance, the preference of most players is to have a lie that places the blade flat on the ice and make it easier to puck, shoot and catch passes.

Every player worth their salt can identify the area where the stick is stiff and gives of the flex.

The stiff spot is called the kick point and depending on which type of kick you have; it helps improves the performance of various shots.

All composite sticks have kick points, and they are custom, mid and low type.

Each player’s role in playing will determine kick point flex to use.

You can measure the handling of the stick by ensuring it’s comfortable to handle while playing.

Getting the smooth or right grip is essential, but it depends on what is the players’ option.

Grips are useful for players who feel their gloves are slippery reducing their control of the stick. Using a grip stick will ease in handling of the shaft.

It’s also important in trying the non-grip, as it easily allows the bottom hand to move the entire stick when shooting and handling passes.

In having a properly fit stick will ensure that the grip and bottom hand positions are defined to maintain the player’s performance.

Have we helped you find the right hockey stick?

If you’re still not certain about it, then it’s best to check and consult with an expert and specify which hand you are good at, left or right handed.

Lift your game by putting on your skates and test the stick by shooting the puck from any distance in the rink.