Nobody wants a great day out on the water ruined by mechanical problems that require an expensive visit to the mechanic.

Reliability is a key aspect of a jet ski, just as important as its top speed or the way it looks.

In this article, we’ll take a look at some of the best jet ski brands whose products are trustworthy and reliable.

Why is Reliability Important When Choosing a Jet Ski?

Two keywords express the importance of reliability for buyers and owners of jet skis: safety and cost.

They represent the best and worst cases of reliability problems.

The worst-case scenario is an accident that causes serious injury or death.

While if you avoid those terrible outcomes, you’ll still be stuck with a bill. 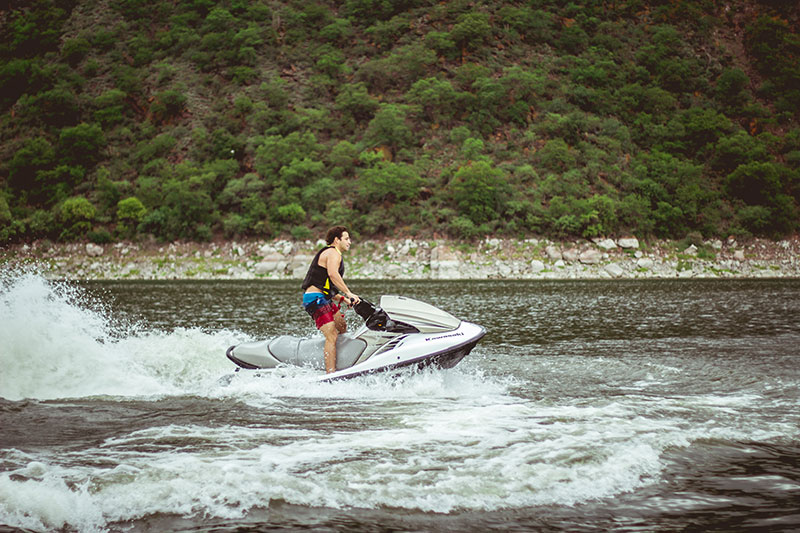 What You Need to Know About Reliability and Safety

Although many people look at jet skis as just fun and entertainment, they are serious machines that have the potential to cause harm if they have mechanical problems.

They aren’t much different than larger boats or even cars in this regard.

While the majority of jet ski accidents happen as a result of driver error or reckless driving in unsuitable conditions, a malfunctioning jet ski also carries two main risks.

If you’re far out in the water and experience a reliability issue that disables your jet ski, you could be stuck in a terrible situation.

Without a GPS locator, or people onshore who know exactly where you’ll be going, this terrible situation could turn dangerous.

Generally speaking, jet skiers love the feeling of being out on the open water.

You want to be able to enjoy that freedom without worrying about whether or not your ride will make it back to shore.

That’s a great reason to buy one of the highly reliable jet skis on this list.

And, once you purchase that jet ski, make sure you keep up on the maintenance to maintain its reliability.

A less common, but super serious, reliability issue that affects jet skis is the potential for explosions.

When gas vapors build up in the engine compartment of a jet ski, there is a risk that a spark will cause it all to ignite at once.

Gas vapors can begin to escape from problems like a broken gasket, a hole in the gas tank, or other faulty interior parts.

All of these causes of explosion become more likely on an unreliable machine. The best machine is a working machine.

What You Need to Know About Reliability and Cost

Even if a reliability problem on your jet ski doesn’t result in physical harm or total damage, it will almost certainly carry a financial cost.

Just like any machine with an internal combustion engine, the less reliable it is, the more you will end up paying in the long run.

Even if you see a great deal on a model that has documented reliability issues, it might well end up more expensive than one with a higher sticker price after a few years’ worth of repairs.

If you aren’t mechanically inclined and unable to do maintenance and repairs yourself, your only choice will be to take your PWC to a dedicated PWC/jet ski repair shop.

The mechanics there are highly skilled and know what they’re doing, but they’ll cost you.

Another thing to think about that’s not directly related to reliability, but important in this context, is the ease with which you’ll be able to find parts and qualified mechanics for a particular make and model of jet ski (PWC).

An obscure, vintage Japanese model might seem cool, but it won’t be easy to fix if something breaks.

Older models with hard to find parts increase the cost of repairs to your Jet-Ski.

Newer models and popular brands are always cheaper to fix.

The Trade-off Between Reliability and Performance

You might picture yourself out on the lake, zooming past everyone in a brand new racing jet ski, but such a dream wouldn’t, in reality, last for very many hours before coming to an abrupt end.

That’s because, as sad as it sounds, the higher the performance profile of a jet ski, the more likely it is to break down.

An engine constantly pushed to the limit is under a lot of pressure, and increases the risk something will break or stop working.

You even see it at the highest levels of professional jet ski racing, where some of the best engineers in the world are responsible for constant upkeep.

On the other hand, a recreational engine doesn’t need to operate on such an extreme level all the time.

They aren’t engineered to lose the fewest possible microseconds over a difficult course, but few people need that kind of performance.

You get greater reliability, feel safer, and need less maintenance if you forgo the absolute top of the line for the more moderate mid-range models.

As a general rule of thumb, the more horsepower you’re sitting on, the more you’ll pay to keep it going.

What to Look For When Shopping for a Reliable Jet Ski

If you’ve decided to make reliability a main priority while shopping for a new jet ski, you still have a lot of makes and models to evaluate.

This is especially true on a used jet ski lot filled with older, unfamiliar models, or on Craigslist.

Here are a few aspects of personal watercraft to consider when trying to gauge how reliable a model might be.

Age – the age of a PWC doesn’t matter as much as engine hours.

Anything over 50 hours is a little old for a used PWC.

The exception to this is if the price of the jet ski is so low, you can factor in replacing the engine fairly soon after purchase.

Functional gauges will ensure you have some insight into the PWC’s operation.

What is the Most Reliable Jet Ski Brand?

Though there is some subjectivity in the exact rank, just about everyone agrees these three brands of PWC are the best: Yamaha, Sea-Doo, and Kawasaki.

Yamaha and Kawasaki have a vast amount of experience producing all sorts of vehicles, from cars to ATVs to boats, while Sea-Doo has always kept is focus on the PWC market.

Many people swear by Yamaha, and the company does have a few points in its favor.

However, unless you’re running a jet ski rental business, any of the top three brands are likely to deliver the sort of reliability you’re after.

When it comes to which company produces the “most reliable” jet ski, it really depends on what sort of PWC you’re looking for and how you intend to use it.

What are the Most Reliable Jet Skis on the Market?

There’s really no easy answer to this question.

But here we take a look at a bunch of models produced by the big three PWC makers, all of which are reliable, and each of which is appropriate for different riders and uses.

The Most Reliable Yamaha Jet Skis

The WaveRunner is Yamaha’s branded personal watercraft (PWC), and it’s one of the best-selling PWC models of all time.

It was reliable when it first hit the market in 1986, and it remains one of the most (if not THE most) reliable jet skis to this day.

Yamaha’s WaveRunner comes in many styles.

The WaveRunner EX is the basic configuration in the series, selling for around $8000.

It’s large enough to seat three people and has basic safety features like dual mirrors and a kill cord.

Despite the low price, the engine is of very high quality; it’s made by Yamaha after all.

The WaveRunner EXR is the next step up from the basic EX, with a lower weight resulting from the hull and deck being made from a very light composite plastic called NanoXcel 2.

It has a more powerful engine than the EX, which means the EXR is a higher performance jet ski in terms of both acceleration and top speed.

The EXR is still a recreational model, though, which means you’re not trading off too much reliability for performance.

The more expensive WaveRunner VX Limited brings even more in terms of performance and features.

It’s a larger machine, able to be used to pull tubers and water skiers (it even comes with a one-person tube).

The top of the line WaveRunner FX Cruiser SVHO is the luxury model in this class.

It’s got everything the lower-priced models do, as well as self-draining footwells and a touchscreen interface.

The Most Reliable Sea-Doo Jet Skis

Sea-Doo is one of the most recognizable water sports brands in the world, and that’s because they have built such a name for themselves in the PWC industry.

Sea-Doos are quite reliable, and when they do break down, they’re especially easy to have fixed.

These are a few of their most popular and reliable models.

The Sea-Doo Spark is a Rec-Lite option that is incredibly popular with casual jet skiers.

It’s one of the cheapest options on the market, with new models available for around $5,500.

You can fit a maximum of three people on a Spark and do a bit of light towing.

However, you won’t have enough power for any tubing that’s too extreme and speeds are low.

Bombardier Recreational Products (the maker of Sea-Doo PWC) has engineered the Sea-Doo Trixx with the lake or flat-water trickster in mind.

The nimble Trixx makes it easier to do jumps, donuts, and surface 180s.

The Spark Trixx is slightly more expensive than the Spark, at $7,500, but it’s still cheaper than Yamaha’s basic Rec-Lite option.

The GTI series of Sea-Doo is a larger and more powerful recreational jet ski.

It has lots of storage and room for three people, making it a popular option for people buying with families in mind.

Eco Mode on the GTI greatly increases fuel economy and will save you money at the gas station.

The Most Reliable Kawasaki Jet Skis

Kawasaki has a long history in the jet ski game. In fact, they were the first to produce a successful PWC.

The “Jet Ski” name is a Kawasaki trademark.

Many experienced riders prefer the power and performance of Kawasaki jet skis, which are a little more difficult to handle (and a little faster) than the more casual Yamahas and Sea-Doos.

You’ll get great performance from this $10,000 machine, without sacrificing reliability.

Kawasaki’s sit-down model, the Jet Ski STX 160, is one of the best PWC at combining power and reliability.

It has 160 horsepower and tops out at 63 miles per hour, but is engineered so you don’t have to max out the engine to reach those upper limits, helping to protect the engine and adding life to your PWC.

The STX 160 is easy enough to drive for most beginners (it’s Kawasaki’s starting model in the U.S.), and has a couple of available upgrades if you’re looking for a more luxurious ride.

The Jet Ski Ultra 310X is a large and heavy personal watercraft that’s perfect for long trips and exploration, with great stability even in very choppy waters.

It has loads of power, making it an excellent choice for experienced and demanding riders.

But there is also an eco mode, which makes it easy for beginners to handle.

Summing Up: The Most Reliable Jet Ski

When it comes down to it, there is no “most reliable” PWC.

A lot depends on what you need and how you use it.

But there is a reason the Yamaha WaveRunner and Sea-Doo’s Recreation models have become so synonymous with recreational personal watercraft.

They have a number of inexpensive, highly reliable options that keep your family safe and up and running on the water.