If you’re familiar with martial arts, then you’re probably also familiar with the belts ranking system that is so common in the sport.

And if you’re new to Muay Thai, then may be wondering if it is the same.

While it is technically considered a martial art, Muay Thai does not have the traditional belts ranking system.

Of course, if you’re outside of Thailand and learning the combat sport at a school in a Western country, then there is a good chance that the school has made up their own belts ranking system.

But keep in mind that this is not traditional for the combat sport.

Let’s dig into this a bit deeper.

As previously mentioned, if you’re doing your Muay Thai training in Thailand, then you’re not going to see a belt rankings system.

It just does not exist in traditional Muay Thai.

The reason for this is that in Thailand, Muay Thai is really no different than boxing is in the United States.

People learn Muay Thai as a combat sport in Thailand and fighter go into the ring to emerge victorious, not to scale up the color of a meaningless belt.

One thing you will notice with traditional Muay Thai fighters is that sometimes they go into the ring wearing an arm band.

Those arm bands are called Prajiads. 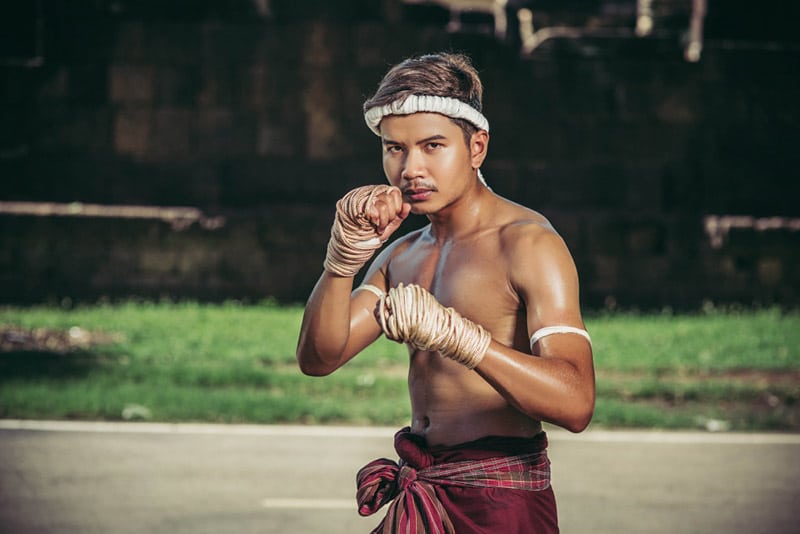 These armbands are often given to fighters in Thailand for luck, not as some measure of their skill.

But the same isn’t true for Muay Thai in Western cultures.

In Western culture, you do find a type of belts-inspired ranking system for Muay Thai.

Outside of Thailand, gyms and schools have adopted the traditional colored ranking system for Muay Thai in the form of colored arm bands.

The arm bands are similar to those that are worn for luck by the fighter in Thailand, except they are colored and those colors correspond with a skill level ranking.

In the USA, the World Thai Boxing Association (WTBA) has set the standard for a rankings system based on colored arm bands. 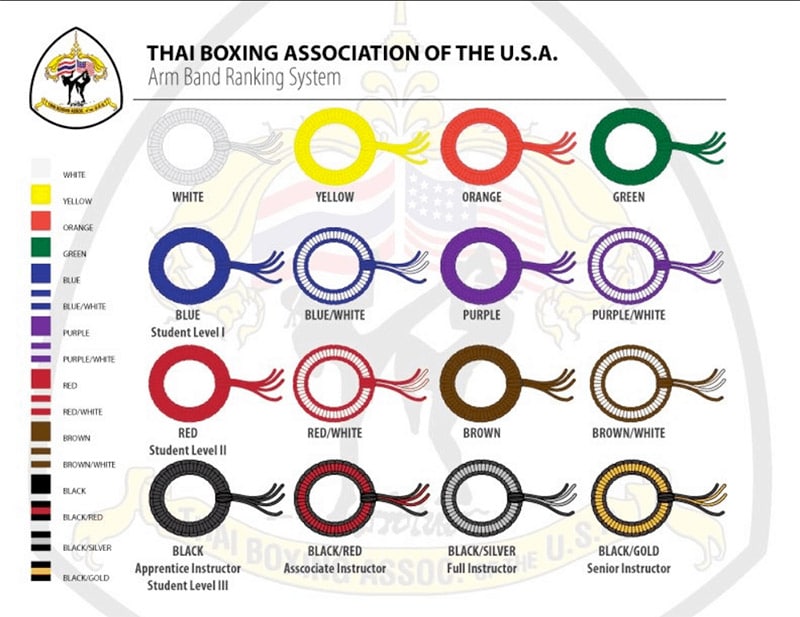 As you can see, this colored arm band ranking system for Thai boxing in the USA isn’t authentic to Muay Thai, but it does offer a sense of accomplishment for Western fighter who are doing Muay Thai as a hobby.

Usually when you’re talking about martial arts with someone, their first questions are about black belts.

Specifically, does it have one? and how long does it take me to get it?

But here’s the thing – there are no black belts in Muay Thai.

In you’re in a Western culture, then you can achieve the black arm band, but there is no black belt for Muay Thai fighters.

The black arm band is the equivalent of a black belt outside of Thailand.

Assuming that it takes you a period of one year to pass through one arm band level, then you’re looking at least 10 years of Muay Thai training to reach the coveted black arm band level of achievement.

But, it may take your more or less time, depending on how much time you devote to practicing and training for Muay Thai.

If you intend to do your training in Thailand, then you will discover that there is one special type of belt in this combat sport – the championship belt.

In Thailand there are fights, which are done by weight class, and the winner of each weight class earns a Muay Thai championship belt.

This is the highest Muay Thai achievement within Thailand. It’s actually the only recognized achievement for the sport in the country.

It’s also common for this championship belt to be considered a Muay Thai black belt.

As you can see, Muay Thai isn’t really considered a martial art in terms of a rankings system, but is closer to boxing with championship titles by weight class.

However, if you are outside of Thailand, then you do find a Muay Thai rankings system based on colored arm bands that designate skill level.

And it could take you around ten years to get a black belt in Muay Thai in the USA, which would be a black arm band and not an actual belt.