Kayaks are made to be very stable and to handle large loads.

Some higher-end kayaks on the market today can handle 750 pounds or even more.

However, it is certainly possible to overload a kayak. In fact, it is easier than you might think.

When you add your weight, the weight of your gear, and the weight of any fish you may be planning to catch, you may very well be near the weight limit for your kayak.

Overloading a kayak can be dangerous. Even if you do not capsize, it will negatively affect the kayak’s performance.

To avoid overloading the kayak, it is important to understand the basics of kayak load capacity. You should also keep potential loads in mind when you are purchasing a kayak.

Read on to learn more about what happens if you overload a kayak.

The Dangers of Overloading a Kayak

As you might imagine, overloading a kayak can be dangerous.

However, it is important that you know how overloading a kayak affects its performance so that you can react properly if you ever find yourself in this situation.

When you overload a kayak, it will sink lower in the water than it was designed to do. This will make the kayak less stable and harder to control.

In extreme cases, it could even lead to the kayak capsizing.

When you severely overload a kayak, the cockpit will begin filling with water.

This problem will be even worse in choppy water, as many waves will crash over the edge of the kayak and into the cockpit.

Of course, the water in the cockpit will weigh the kayak down even more.

When you overload a kayak, it will also become more susceptible to wind.

If there is more than a slight breeze blowing, the kayak will be much harder to control.

If the wind is blowing hard, there’s a good chance that the kayak will capsize.

Finally, an overloaded kayak often has poor weight distribution. This can make the kayak difficult or even impossible to control.

It also greatly increases the chances of the kayak capsizing. 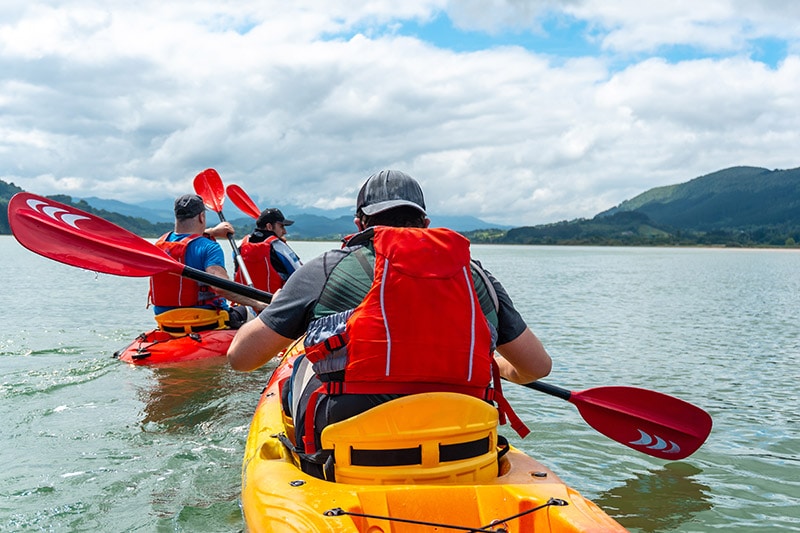 What You Need to Know About Kayak Stability

As you may have learned if you have taken any safety training, there are two types of stability that you need to keep an eye on when you are piloting a kayak: primary stability and secondary stability.

Simply put, primary stability is how stable the kayak feels when you are sitting stationary.

Secondary stability is how stable the kayak feels when you are moving around in the boat.

It is important to keep an eye on both primary and secondary stability.

It is easy to be lulled into a false sense of security because the kayak feels stable when you are sitting still.

However, you should also test the kayak’s secondary stability by moving slightly to the stern and bow and seeing how the boat reacts.

The Basics of Kayak Load Capacity

Kayak load capacity is not that difficult to understand, but it is a bit more complex than you might think.

For example, you should not get a kayak with a load capacity rating that is right at what you expect your load will weigh.

Instead, you want to get a kayak that has a much greater load capacity than you think you will need.

One helpful rule of thumb is to use about 70% of the load capacity of your kayak.

For example, if you expect your load to be about 350 pounds, you should look for a kayak with about a 500-pound load capacity.

For safety reasons, you always need to stay well within your kayak’s weight capacity, even when you are carrying a larger load than normal.

Things to Consider When Purchasing a Kayak

While the 70% rule is a helpful rule of thumb, you can never have too high of a weight capacity rating.

In fact, the only reason to not get a kayak with a higher weight capacity is that it is out of your budget.

Kayaks with higher weight capacities are generally more expensive because they are made out of sturdier materials.

You should resist the temptation to buy a cheaper kayak with a weight capacity that will barely cover your expected load.

This is simply a recipe for disaster, especially if you are buying a tandem kayak that is intended for two people.

The weight of two people and their gear can add up very quickly.

Keep in mind that you can always buy a high-quality used kayak at a discounted price to ensure that your boat has a high enough weight capacity for yourself and your gear.