Heading out on the road with your bike can be nerve-wracking, especially for beginners who may not feel comfortable sharing the road with cars and trucks.

One of the most common questions is which way to ride.

Whether you’re cycling as a hobby or to get fit, it’s essential to know whether to ride your bike with or against traffic.

Page Contents show
What Side Of The Road Do You Bike On?
Why Does It Matter Whether You Go With Traffic or Against It?
It’s Illegal to Go Against Traffic
Drivers Won’t See (Or Expect) You Coming Toward Them
Limited Reaction Time
You Need to See Traffic Signs and Signals
Headlights Can Blind You
Protect Other Cyclists
Can You Bike on the Sidewalk?
What About Riding on a Highway?
Additional Tips for a Safe Ride
Stick to the Right Side

What Side Of The Road Do You Bike On?

You should bike on the right side of the road, or with the traffic flow at all times.

While many bike laws vary from state to state, they all say that cyclists need to follow the road rules like any other vehicle.

In most states, you can get a ticket for biking against traffic. 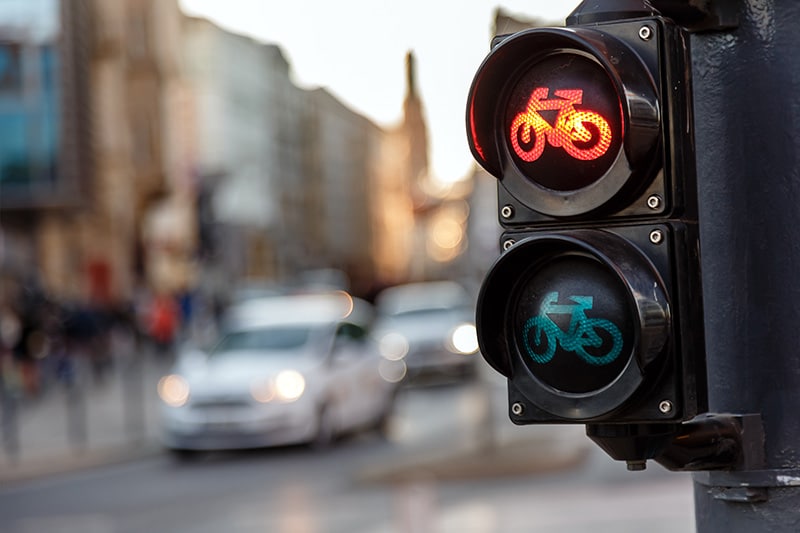 Why Does It Matter Whether You Go With Traffic or Against It?

As kids, many people learn to walk against traffic so that drivers can see them.

It’s tempting to apply that logic to cycling and question whether to ride your bike with or against traffic.

However, there are several good reasons to go with traffic.

It’s Illegal to Go Against Traffic

In many jurisdictions, it’s the law to bike as far to the right as possible.

Most cyclists follow motor laws, but it’s easy to notice when somebody doesn’t, which sets you up for a ticket.

Besides, you’re at fault if you get hit while going the wrong way.

Drivers Won’t See (Or Expect) You Coming Toward Them

Most drivers learn that cyclists should ride with traffic, so they won’t necessarily look for somebody coming toward them on a bike.

It’s surprisingly difficult to see something when you aren’t looking for it, meaning a driver may only look for cyclists going with traffic and miss you altogether.

Riding with traffic is safer when entering the street and passing through intersections.

You should still pay extra attention whenever entering or crossing through high-traffic areas, but it’s far safer to stay to the right.

Riding with traffic makes it easier for cars to spot you (especially if you make yourself visible) and gives them plenty of time to slow down and safely pass you.

It’s much easier to stop or avoid you at 20mph than at 60mph.

Even if you’re not traveling as fast, it’s extremely difficult, if not impossible, to avoid a car coming at you at 60mph.

Another issue with reaction time has to do with physics.

When you take away a driver’s reaction time, you set yourself up for more severe injuries.

Getting struck head-on at 50mph is much worse than a sideswipe or rear-end at 25mph.

You Need to See Traffic Signs and Signals

Since cyclists must follow the traffic laws, you can’t run stop signs or red lights.

When you can’t see the signal color, you could blow through a red light.

Further, as a vehicle, you need to observe all road signs, including pedestrian crossings.

Missing a sign could result in you hitting a pedestrian.

Headlights Can Blind You

Cycling at night is dangerous enough without throwing headlights into the mix.

Riding against traffic means blinding headlights in your face that could throw you off course enough to put you in danger.

On the other hand, riding on the right keeps headlights behind you and makes you more visible to drivers.

Of course, you must use the proper gear for a nighttime ride.

If you’re still wondering if you should ride your bike with or against traffic, think about other cyclists on the road.

Two bikes cannot fit comfortably side by side.

Now, imagine traveling against traffic with another cyclist heading straight for you.

Can you see the issue?

Can You Bike on the Sidewalk?

Who grew up riding bikes on the sidewalk?

It’s still a fairly kid-friendly activity, but when teens and adults bike on sidewalks, it can terrorize pedestrians.

As a cyclist, you should follow all traffic laws, including yielding to pedestrians.

It’s difficult to avoid pedestrians if you’re on the sidewalk with them.

Some cities and townships have laws against biking on sidewalks to protect pedestrians.

It’s a good idea to check out the local regulations before attempting to bike the sidewalks in your area.

Of course, things get fuzzier and occasionally more flexible in areas with no bike infrastructure, rampant speeding, and reckless driving, or double-parked cars narrowing the road.

However, it’s usually better to take a lane to keep yourself and others safe.

What About Riding on a Highway?

Biking on a high-speed route like a highway can be extremely dangerous because most road bikes cap out at speeds far less than a motor vehicle.

Even though there are ways to increase your cycling speed over time, you’re not likely to hit 60 or 70mph any time soon.

Try to find an alternative path if possible, but if not, stay as far to the right as possible.

It helps to use the paved shoulder.

You may want to look behind you more often than usual and brace yourself for the excess wind.

Additional Tips for a Safe Ride

It’s a good idea to consult your local regulations to make sure you understand the expectations.

However, some of these little-known or overlooked tips and tricks may help you along the way.

Stick to the Right Side

As more people take to the roads on bikes for fun, fitness, or a healthier commute, more bike paths may appear in your city.

Bike path or not, it’s safer for you and everyone else on the road to ride with traffic.

The next time somebody asks you, “what side of the road do you bike on,” you know what to answer!

1 thought on “Should You Ride Your Bike With Or Against Traffic?”