Learning to surf on a beginner surfboard at the beach can be difficult and challenging, but also very rewarding.

Some people travel all over the world, just to find the perfect waves.

If you are a beginner big waves and fast water can seem intimidating, but there are a lot of great and exotic places that have waves for beginners, too.

When you imagine surfing, Hawaii or California probably come to mind.

While they have certainly earned their reputation for surfing, there are a lot of hidden gems in the other half the hemisphere.

For the last few years surfing has been on the rise in countries in South America, and now there’s no denying that South America offers some incredible surfing opportunities, even for beginners.

While the cold of the Pacific Ocean might cause you to think twice, don’t let it deter you.

That’s what wetsuits are for.

The beautiful beaches and incredible natural surroundings in South America combined with wave potential and often uncrowded beaches will more than make up for chilly water.

Not to mention the incredible charm and uniqueness these countries have to offer.

So, keeping in mind that the seasons in the southern hemisphere are not the same as the northern, let’s take a look at some of the best spots for beginners in South America. 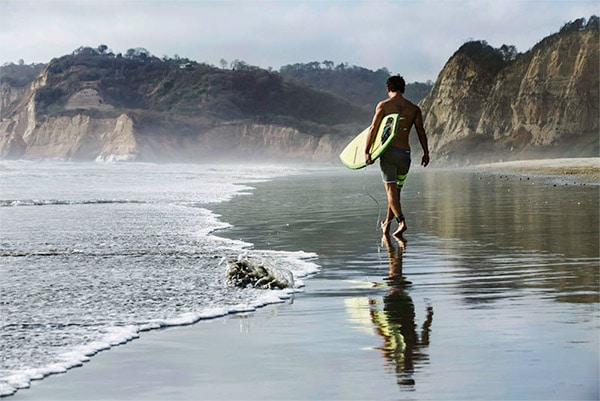 Let’s start at the top of South America with Colombia.

This country is very unique because it touches both the Pacific and the Caribbean.

Caribbean waters are generally calm and warm, which is ideal for beginners.

The Pacific side will promise some impressive waves and isolated beaches, some of which may be suitable for beginners.

Because Colombia is just above the equator, you can generally expect warm weather, and warm water along the coasts.

This country is also unique in that it has two summers or dry seasons lasting form December to January and again from July to August, while the winter or rainy season lasts from April to May and October to November.

Ecuador is small in relation to other South American countries, but it promises to give you a number of incredible beaches and balmy weather.

Straddling the equator, the dry summer lasts from June to September and the wet season from October to May.

Moving further along down the coast we arrive to Peru – famous for its Incan ruins it has more to offer than just Machu Picchu.

Along the coast you’ll find black sand beaches made from volcanic ash with some of the best surf in the world.

You’ll find pro surfers catching some intense waves here or trying to ride the longest wave in the world, Chicama.

But don’t worry, there are plenty of places for beginners to catch some waves while enjoying Peru’s unique geography.

Even though the air might get warm during summer, with an average water temperature of 19°C (66°F) throughout the year you might feel a bit turned off of the surf.

But don’t let the chilly waves deter you.

Wearing a wetsuit you won’t even notice the cold as you ride these amazing waves.

What’s not to love about Chile? This is one of the safest, most developed countries in Latin America.

Chile is so thin, you can almost throw a rock in any direction and hit the ocean or the Andes.

Because of its length, you’ll find some of the greatest geographical diversity crammed into what’s relatively a little country.

Easily to travel, you won’t ever get to far from the coast, and Chile certainly has many unexplored beaches to surf.

It’s best to come during late spring or summer (December to February) if your hoping for some sun and nicer water temperatures.

Even so, the water is powerful and incredibly beautiful. The chill and freshness will give you a refreshing burst of energy.

Moving around the southern tip of the continent bring us to Argentina and its Atlantic coast.

Although much of this coast isn’t always known for consistent surf, there are quite a few places worth exploring.

After flying into Buenos Aires and enjoying all that miraculous city has to offer, you can make your way down the coast to the more surf-friendly sections.

Even though you might subconsciously think Argentina would be a little warmer than the Peruvian and Chilean’s Pacific water, you’d be wrong – the water can get down to 10.1°C (50.2°F) in September and will only get to 20.7°C (69.2°F) at the height of summer (December to February).

Get ready to suit up again.

It might be tempting to overlook this little country situated right above Argentina, but if you do you’ll be missing a relaxing, beginner-friendly surfing experience.

Not far from Montevideo are a few spots perfect to relax, enjoy a beach bum surf culture and either learn to surf for the first time or hone your abilities.

You will be able to relax on the beaches, drink a few beers and because Uruguay isn’t too costly, save a lot of money at these surfing spots.

Moving up along the Atlantic coast we reach Brazil. From Río to the Amazon there’s a lot to see and it might be hard to take it all in.

Brazil’s waves are as diverse as the rest of the country and offer surfing options for every level.

Even so, the best place to go for the most consistent surf is in the south.

Brazil’s seasons are still in line with the rest of the hemisphere with summer lasting from September to February, so plan your trip accordingly.

Skipping a few thin countries along the Caribbean coast that don’t offer any promising surf, we’ll jump ahead to our last country on the list – Venezuela.

Closer to the equator, the sea temperature will be much warmer, usually hovering around 27°C (80.6°F).

Unlike many of the other countries mentioned, Venezuela’s unique location gives it a tropical climate.

It has options, but is lesser known among the South American countries, which means you will have less competition.

When it comes down to it, really all of these countries have amazing possibilities and are bound to give you a once and a life time experience, not just when it comes to surfing, but in so many other ways as well.

The geography, climate, natural features and culture will definitely dazzle you as much as the waves and probably make you want to extend your trip indefinitely.

So many times the ruggedness of South America and a somewhat misleading reputation for danger makes people cross them off their list, when in reality, these places will steal your heart and leave you wondering why the beach you’re sitting on watching a perfect sun setting over incredible waves is deserted.

But then again maybe you’d rather keep the secret, and the waves, to yourself.