While many people go to Florida to relax on Miami’s beaches during the day and party at night, Florida’s beaches have more to offer than a good sun tan.

The east coast is lined with consistent surf that can also get pretty impressive when hurricane season rolls around in the late fall.

If you’ve come to surf, you’ll probably spend more time on the 7 mile strip of beaches between Atlantic Beach and Ponte Vedra just east of Jacksonville than in the city itself.

Free to the public, Atlantic Beach has a right and left hand beach break, while Jacksonville’s Pier has a sand bar.

You can catch right and left hands on either side of the pier.

While these waves are sure to be fun for any level, more experienced surfers can fork up a few bucks for the entry fee and head to one of the beaches around the inlet.

Mayport Poles is one of the most popular, and you can catch some nice waves at the pier or the jetty.

The only downside to these beaches is their proximity to the city, which means they almost always draw a crowd. 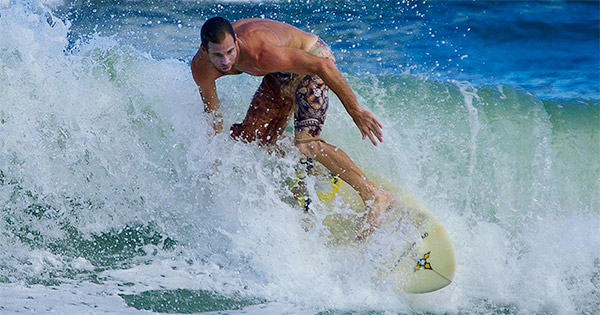 About 40 miles southeast of Jacksonville lies the cute little city of St. Augustine.

The unique and eclectic architecture of this historic city, along with the sight of endless beach break waves near the pier, will leave a lasting impression.

A short drive away is Anastasia State Park, where you can access another set of beach break waves.

The whole length of the 4 mile beach has surf potential, but after a long walk north of the blowhole, you’ll find tunnel forming right and left hand breaking waves that can get as high as 10 feet in the fall.

You can throw in a trip to Disney World if you plan to surf around Daytona, which is only an hour drive from Orlando.

Together, Daytona and New Smyrna make up 23 miles of beaches.

New Smyrna Inlet has some of the most consistent waves in Florida.

Not only that, they’re perfect for stunts and some air time, so although they usually only reach four feet in height, it’s one of the most popular surf spots.

Although New Smyrna Inlet is often considered Florida’s best surf spot, there are a number of other beaches around Daytona worth checking out.

Daytona Beach itself has a good surf near the pier, and between Daytona and Smyrna is Ponce Inlet.

It’s ripe with right and left hand beach and jetty breaks that have been known to get pretty long and as high as 12 feet in the fall.

Although Cocoa beach pier is already a popular surf spot for its short three to six foot waves, it could soon become known throughout the world.

Current plans are in the works to build a new pier designed to make the perfect waves for surfing.

When a jetty was built a little further down the coast, in Sebastian Inlet, it had the added effect of creating refractions during southern swells that drew surfers from all around.

If Cocoa goes through with the pier, it could turn the relatively mellow waves into something surfers usually only dream of.

An hour south of Cocoa Beach is an existing location with three peak waves.

At low tide, Sebastian Inlet can give any Florida surf spot a run for its money.

With consistent waves that tend to barrel and a reliable range between two and six feet in height, the inlet is the ideal playground for any surfer.

While the construction of a jetty has had its impacts, the famous rebound wave First Peak can still be caught with careful patience.

While Florida has a lot to offer, there’s one more thing surfers should keep in mind.

While most surfers are used to avoiding the usual dangers of currents and rocks, Florida’s coast has an additional obstacle – sharks.

Just be aware of the danger and take extra precaution.