Many of the beaches along the southern coast have had an important role to play in building the popularity of surfing, creating world class surfers and innovating surfing technology.

Many locals probably have their own personal favorites, and several beaches contest who really has the best waves.

However, if you’re serious about surfing there are several SoCal beaches that simply can’t be overlooked. 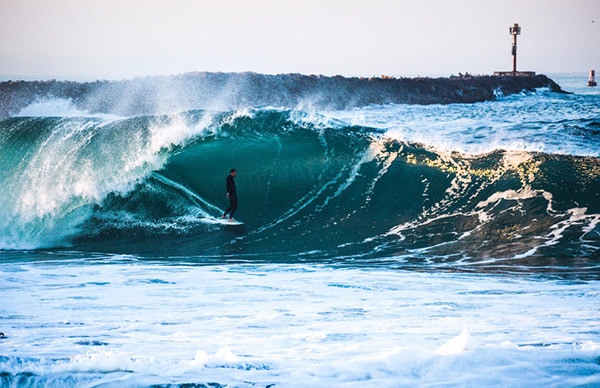 Although this beach may not boast much space for people looking to relax in the sun and tan, it’s ideal for surfers who want to put their abilities to the test.

Combine this with long, hollow waves just east of the pier and it’s easy to see what keeps drawing people from around the world to this little corner of the US.

Unfortunately, you might have to wait your turn in line.

The Beach Boys didn’t mention Rincon in Sufin’ Safari just because it went with the beat, it was already a popular spot by the 1960s.

Big names like Tom Curren and Kim Mearig have brought their boards to this little beach, and even competed in the Rincon Classic, which is held every January.

This beach is exposed, in more ways than one. A wet suite’s not technically required for these consistent waves, and neither is a bathing suit, really.

Black’s Beach isn’t just surfer-friendly, it’s also one of the largest nudist beaches in the US.

If the sight of naked humans doesn’t kill your passion for surfing, there are plenty of opportunities for quality surf.

In this half mile strip you’ll find both right and left hand breaking waves that pack a mean punch.

Good all year round, these waves have been known to swell to ten feet or more at times. Although you might see some naked butts tanning on the shore, feel free to wear your gear.

Located within Malibu Lagoon, Surfrider Beach has been home to some of the greats.

It was here in Malibu that surf boards themselves were revolutionized by Bob Simmons, Matt Kivlin and many others who helped develop the light-weight, fiberglass covered boards many still use today.

Surfrider Beach, as you might expect, has the perfect wave.

It’s surfable most of the year (except winter) with right hand waves coming from a cobblestone beach break.

Longboarders love these long, smooth waves with a relatively low swell. If you can’t make it there this year, don’t worry.

Surfrider beach was made the first World Surf Reserve in 2010, so you’ll be able to catch those waves for years to come.

Not actually one spot, Trestles encompasses several high quality surf spots, all of which require a long to get to.

Luckily, most of the trail goes through scenic marshes and estuaries. In the north is Cottons, good for all types of boards and surfers, from beginner to expert.

Following the beach south, however are the Lower Trestles, the most popular and challenging surf spot for shortboarders.

These fast and hollow waves are for the most experienced.

The last two sections, Middles and Church are more suited to intermediates and beginners.

If you don’t want to brave the crowds of the other beaches, this beach might have a little less competition.

Home of the largest surfing competition in the entire world, Huntington Beach is sometimes called Surf City of the USA.

Why is the US Open of Surfing held here every summer?

The right and left hand beach breaks work all year and at any tide.

You can surf on either side of the long pier characteristic of Huntington or further along the beach.

Waves start at three feet and can work up to as much as twelve, forming barrels.

Although the beach is predictably crowded, it’s a safe bet there will great waves all day, every day.

When Newport constructed the rock jetties in the harbor in the 1930s, the city had no idea it would create one of the most famous waves in the United States.

When a south swell rolls in, the waves crash against the jetties and bounce back, making a second, rather epic wave.

Together, they form a wedge that reaches incredible but dangerous and unpredictable heights when storms are stirring, easily reaching 12 or 15 feet.

Although waves like these are reserved for the most daring and experienced, other waves are shorter, hollow and more consistent.

These beaches have a long history, and waves that are known and coveted throughout the world.

Although these are SoCal’s best surf spots, when it comes to surfing in the Golden State, there’s probably even more places worth checking out.