My personal favorite national park for a few years now, Badlands National Park gained in popularity after being featured in the Oscar-winning film, Nomadland.

And it’s not just the scenery in Badlands that is super interesting.

We’ve got some facts on this South Dakota National Park.

Page Contents show
Badlands National Park is situated in South Dakota. It includes 242.756 acres divided into 2 units:
History
What is the park famous for?
Things you might not know about the park:

Badlands National Park was recognized as a national park in 1939.

The North Unit is managed by the National Park Service, whilst the Southern Unit is co-managed with the Oglala Lakota tribe.

It’s also home to the largest undisturbed mixed-grass prairie in the US. 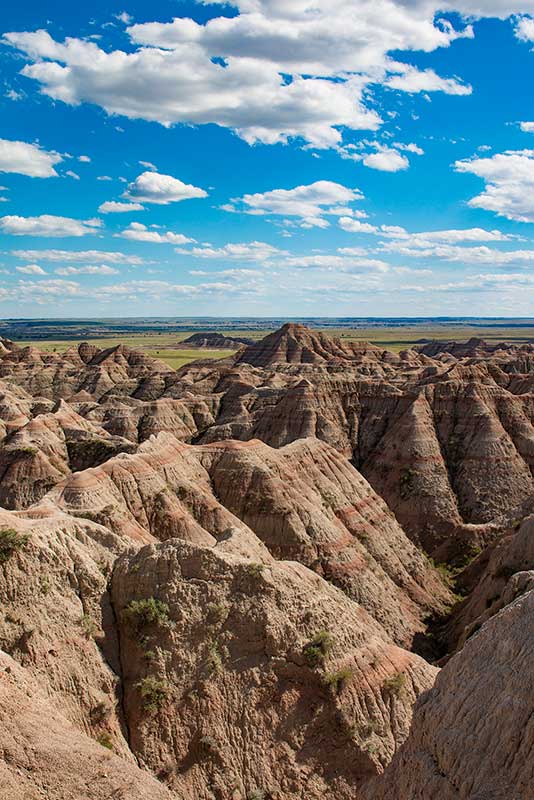 For thousands of years, Native Americans have occupied this area and used it as their hunting grounds.

Thanks to oral stories passed through the generations and archeological records, we know Native Americans would set up camp in secluded valleys, where they had easy access to water and food.

150 years ago, the Great Sioux Nation, which consisted of seven bands, including the Oglala Lakota, had completely taken over the northern prairie, displacing the other tribes.

In the 19th century, homesteaders moved into South Dakota.

The U.S. government forced Native Americans into a small portion of the territory, called reservations.

Tensions continued to rise until December 1890, when a band of Minneconjou Sioux Native Americans, led by Chief Big Foot, was overtaken by the U.S. Army near Wounded Knee Creek in the reservation.

This massacre was the last big clash between Native Americans and the U.S. military until the American Indian Freedom Acts in the 1970s.

What is the park famous for?

The Badlands themselves are mostly devoid of vegetation, but it hosts the largest protected mixed-grass prairie in the U.S.

The park is also famous for its numerous fossil beds, including the world’s richest bed from the Oligocene Epoch.

They hold the remains of both extinct animals and ancestors of today’s animals, such as the rhinoceros.

Scientists have studied specimens from the White River region since the 1840s and, by the mid-1800s, they had identified 77 distinct species of animals.

The park’s fame is due to its geology.

These geologic formations are the end products of deposition and erosion.

In the park you can find:

The layers of the badlands correspond with different eras in geological time.