It’s a highly-skilled sport that challenges the body, mind, and spirt.

If you need some inspiration to step into the ring, or square up to the heavy bag, these boxing quotes capture the many facets of boxing, reminding us it’s more than just fist deep.

These inspirational boxing quotes are about boxing as a general idea. 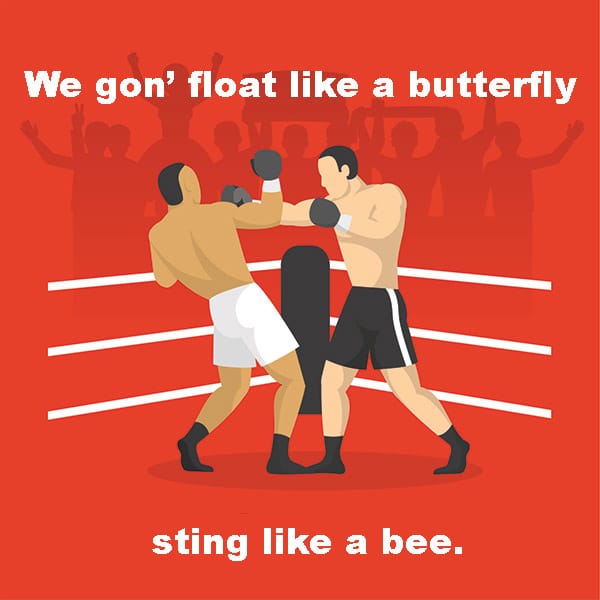 2. Boxing is a beautiful sickness in so many ways. – Margaret Goodman

3. Rhythm is everything in boxing. Every move you make starts with your heart, and that’s in rhythm or you’re in trouble. – Sugar Ray Robinson

4. The content and thematic material of dance is, of itself, like boxing. You play tennis and baseball. But boxing is not a sport you play; you stand up and do it. – Twyla Tharp

5. To become a champion, fight one more round. – James Corbett

6. In boxing, they say it’s the punch you don’t see coming that knocks you out. – Katherine Dunn

7. Boxing is not always about standing in the middle going toe to toe. It’s about poise and grace under extreme pressure. – Peter Berg

8. I see the beauty in boxing. It teaches me strength physically, but mostly mentally. I had to learn my strength, because for so long I could have been tougher than I was. – Kelly Rowland

9. In boxing, it just seemed to me from the time I was a very small child, we have a peculiarly civilized form in that boxers don’t screech and holler. They don’t use weapons. When the bell rings, they fight; when the bell rings again, they stop. – Katherine Dunn

Boxing Quotes About Boxing as Sport

These boxing quotes are specifically related to boxing as a sport, most of them provided by pro boxers themselves.

10. Whoever has courage and a strong and collected spirit in his breast, let him come forward, lace on the gloves and put up his hands. – Virgil 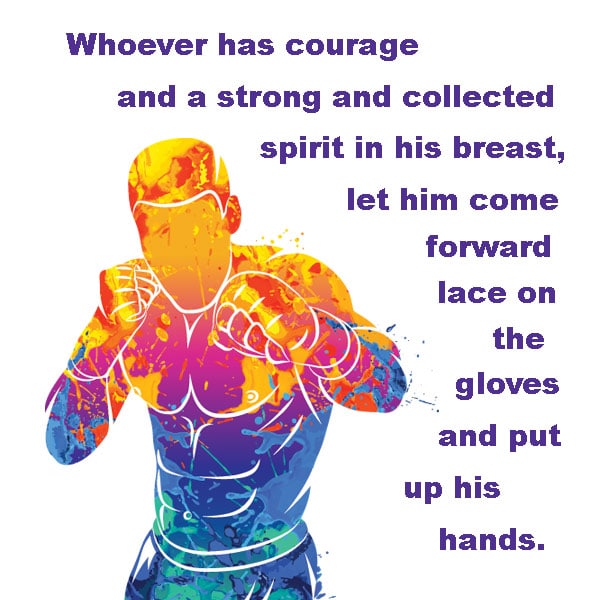 11. Sure the fight was fixed. I fixed it with a right hand. – George Foreman

12. When I started boxing, people laughed at me and said, “What can women do in boxing?’ I took it as a challenge. If men can do it, why can’t women? And I became a world champion before my marriage. – Mary Kom

13. Bruce Lee was an artist and, like him, I try to go beyond the fundamentals of my sport. I want the public to see a knockout in the making. – Sugar Ray Leonard

14. The fight is won or lost far away from witnesses – behind the lines, in the gym and out there on the road, long before I dance under those lights. – Muhammad Ali

15. Boxing is like chess. You encourage your opponent to make mistakes so you can capitalize on them. People think you get in the ring and see the red mist, but it’s not about aggression. Avoiding getting knocked out is tactical. – Nicola Adams

16. I thought half my head was blowed off. When he knocked me down, I could have stayed there for three weeks. – James J. Braddock (about getting hit by Joe Louis)

18. Most people who watch a fight think it’s all about the muscle: hitting harder, moving faster. And, yeah, sometimes it looked that way. But telling somebody that you won a fight by hitting the other person harder and more often was like telling somebody that the way you kept from drowning was by moving your arms and legs. – Kameron Hurley

Quotes About Boxing as Fitness

These boxing quotes are about boxing as a fitness activity, with a side of inspiration to get you ready to face that heavy bag or sparring partner.

19. I love boxing. There’s something fierce about using your body’s force that way. – Sophia Bush 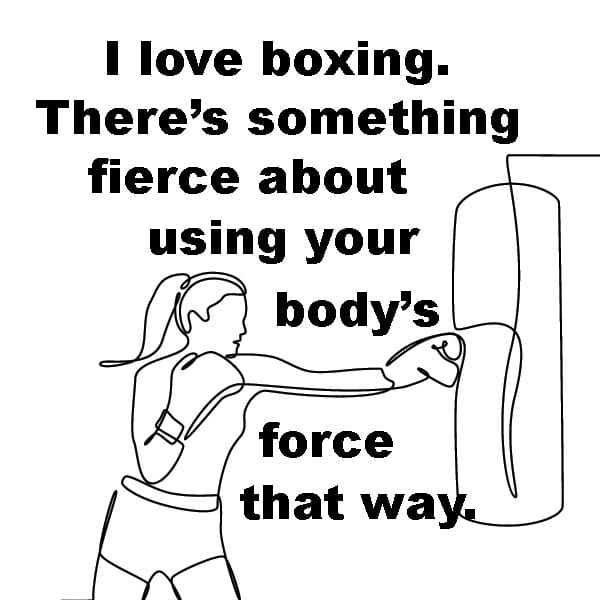 20. It is really important that we get more women doing exercise and being active, and those that have taken up boxing or boxing training will definitely find that it has a really positive impact on their health, fitness and well-being. – Nicola Adams

21. I do boxing with a trainer. It’s great because you get to punch things and let out stress. – Molly Qerim

22. I actually study boxing – my dad was a Golden Gloves champion so I learned how to fight at a very young age. Growing up in Brooklyn you always had to watch your back, so I pretty much learned to protect myself. – Lana Parilla

23. I love challenges, I love intensity, and I also like to challenge my mind. Believe it or not, boxing is not only about physical force. You use a lot of concentration; it’s really mental. – Adriana Lima

24. I took up boxing as a fitness thing. I got obsessed, and I would go every day when I wasn’t working. It’s just an insane sport when you get into it. – Lena Headey

25. I really like boxing because you have to combine concentration and imagination. I feel like I’m actually learning something that’s useful. – Stephanie Sigman

26. You have to be super focused when you’re boxing. After I’ve done a few rounds, I feel as if I can conquer the world. – Ciara

Conquer the world… Not bad, huh?

Just getting started with boxing? Check out our beginners guide – Getting Started With Fitness Boxing.