Calisthenics are the exercises you do every day without even realizing you’re doing them.

Each time you get up from a chair or climb stairs or squat to play with your kid, you are technically performing a calisthenic exercise.

It can be hard to recognize these exercises over the course of a given day because they are just what we have to do to live, but stand up from your chair 20 times in a row, climb 10 flights of stairs, or walk 15 miles through a city while sightseeing, and it becomes much clearer these things are, in fact, physical work.

Put enough of these movements together, speed them up, or modify them, and just like that you’re doing calisthenics.

Calisthenics is strength training that uses your own body weight for resistance.

You may use equipment to perform some of these exercises, but the only weight involved is your own.

These exercises typically target major muscle groups, like your legs/glutes or arms/shoulders. 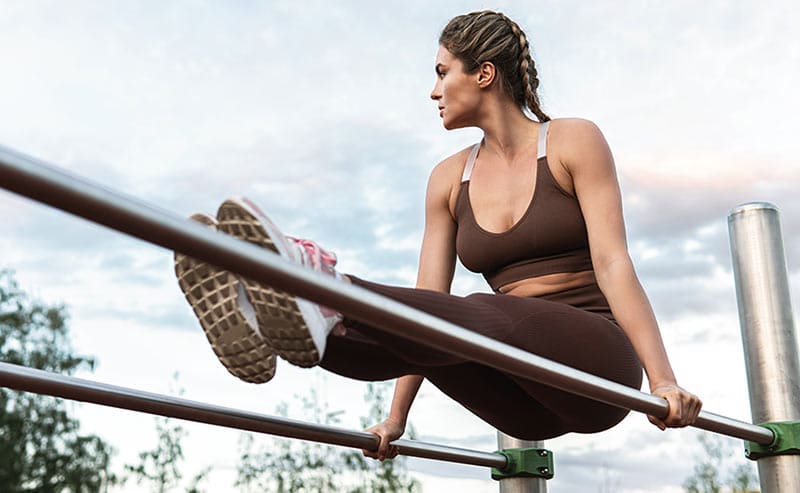 The benefits of calisthenics are the same as for most strength-building exercises.

Some benefits of these bodyweight exercises if you develop (and stick to) a routine include:

The main benefit of calisthenics, though, is that it is strength-training you can do anywhere without any equipment at all.

In fact, it has become a badge of honor amongst calisthenics enthusiasts to perform calisthenics moves in a variety of ways and settings.

How Do Beginners Start Calisthenics?

Beginners should start calisthenics with the most basic moves they can perform well.

This may mean modifying moves until you build up enough strength to do them with proper form.

A good example of calisthenics alternatives is found in push-ups.

Push-ups are a difficult exercise for many people (but especially women) to perform.

But there are several modifications of push-ups that make them accessible to people at all levels of strength and fitness.

But for some people they aren’t.

With bodyweight exercises it’s important to remember that any movement you do which requires effort helps your body build strength.

How Often Should I Do Calisthenics?

Calisthenics are strength-building exercises, which means they tear muscle fibers.

When starting out, don’t do calisthenics more than two to three times per week, and skip at least a day between sessions.

Can You Do Calisthenics Every Day?

Technically, you do do calisthenics every day, but as an exercise form, no.

Especially when you are first starting out, your body needs rest days to heal.

However, as you develop more strength, there are a handful of calisthenics exercises that are so gentle on the body, they can be performed daily, such as basic squats or standing on one leg.

If you do daily bodyweight exercises, though, you need to pay attention to your body.

If you’re experiencing residual pain from the exercises, it’s time to pull back.

Is Calisthenics Good For Weight Loss?

Calisthenics is good for muscle-building and toning, which can greatly aid in weight loss.

Many moves also engage multiple muscle groups simultaneously, which means you burn more calories with calisthenics than you do with lifting weights.

It is also possible to perform calisthenics at a rapid enough pace to increase your heart rate and burn even more calories (as long as you can still maintain good form).

But calisthenics is not as good at burning calories as basic cardio exercises like running and biking, so it’s not the best option for losing weight.

What calisthenics will help you do, better than just about any other exercise, is burn fat.

The combination of decent calorie-burn with muscle-training works directly at body fat, increasing muscle definition and giving you an overall more toned appearance.

Can You Build Muscle With Calisthenics?

Yes, absolutely. But it’s not as easy to do as it is with weightlifting.

Since calisthenic exercises rely solely on your bodyweight, at some point you will hit a plateau.

Calisthenics will still keep your muscles toned, but they won’t get any bigger.

Once you hit that plateau, you’ll have to modify exercises (like adding incline or weight) if you want to keep building muscle.

Can Calisthenics Get You Ripped? Or Give You Abs?

Not only can calisthenics get you ripped, there are few better exercises for toning, fat-loss, and muscle definition.

Since calisthenics focuses on major muscle groups and many of the moves engage multiple of these groups at the same time, it’s a full-body workout that will give your entire body a more visibly chiseled appearance.

Many weightlifters find that only with calisthenics can they achieve the kind of defined appearance they are after.

Is Calisthenics Better Than The Gym?

It depends on what your goals are and what you’re doing at the gym.

Are you going to a gym with a swimming pool and using it?

Swimming is one of the few exercises that engages as many muscle groups as calisthenics at the same time and gives you an excellent cardio workout to boot.

It’s pretty much the only gym exercise that beats calisthenics on its own.

Are you going to the gym for cardio?

A treadmill, elliptical, or stationary bike will all provide good cardio exercise.

They will also help you build some muscle.

Of the three, the treadmill requires the most effort since you have to keep up with its pace and it’s working against you, instead of with you like an elliptical or a bike.

But you still won’t build as much muscle, or get as toned, as you will with calisthenics.

You will, however, burn more calories if you are working at a moderate to intense pace.

So, if weight loss is your main goal, some gym time can be beneficial.

Though, you will need to add in weights or calisthenics for a fully-rounded routine.

Are you going to the gym to lift?

If your goal is to develop big muscles, lifting weights is the most direct path, so going to the gym is better than doing calisthenics.

But weightlifting alone is not a path to good health.

As far as calorie-burn, toning, muscle definition, and overall health, calisthenics is the superior exercise.

Calisthenics For Beginners At Home

When you first start calisthenics, there’s no need to get fancy.

Many calisthenics moves are surprisingly simple.

Starting with the simplest moves that are easy for you to perform, but still help you build strength will make it easier to stick with your routine once the exercise get a bit more difficult.

Here are five starting calisthenics moves we like for beginners:

Why we like it for beginners: It doesn’t get any simpler than this. You are literally just standing up.

But the sit-to-stand exercise gives you a much better understanding of the calisthenics you do throughout a given day that you could easily build upon and turn into mini-workouts.

We really like the way Doug from Eldergym Fitness for Seniors describes and demonstrates the movement.

(Yes, this video is aimed at seniors, but this is a good exercise for anyone who needs to work on their lower body strength.)

Why we like it for beginners: As simple as the sit-to-stand exercise, the single-leg stand won’t be as easy for many people to do.

It is simply standing and balancing on one leg, but is a good way to discover just how strong your legs actually are individually when they are not part of a set.

This move will mostly help improve your balance, but you will be supporting all of your weight on one leg instead of two, so it does help build strength as well.

Why we like it for beginners: Arm circles is one of those calisthenics exercises that barely feels like you’re doing anything at all, but is actually a stellar toner.

This simple circular movement builds muscle in your biceps, triceps, and shoulders.

And when you feel the effects the next day, you’ll realize even the simplest moves can be very effective.

Why we like it for beginners: Squats are one of the most beneficial calisthenics exercises overall when it comes to building strength. They engage your entire lower body as well as your core.

They can be a bit challenging if you have poor balance or weak lower body strength.

(Just be careful. If you’re not used to the movement, it can be easy to lose your balance. But the good news is, you only have to squat as far as you feel comfortable.)

When you get to squats, you will really start to feel the work involved in calisthenics and that your bodyweight actually does provide incredibly good resistance during specific movements.

Why we like it for beginners: The only beginner exercise we’ve included that not everyone will be able to do (at least to some degree), push-ups are one of the simplest, most effective calisthenics for building upper body strength and endurance.

Attempting a push-up will give you a good idea of your starting point when it comes to upper body strength. (Don’t worry. There are plenty of people who can’t even do one.)

If you can’t do it on your hands and toes, push-ups are also one of the easiest exercises to modify to your own ability.

To some degree, you already do calisthenics every day.

Each time you get up from a chair or walk up the stairs, you are working against gravity.

Do multiple reps of these things, or combine several of them together, and, just like that, it becomes an actual workout.

And since calisthenics is a workout that requires no equipment except for your own body, it’s one of the easiest exercise systems to carry with you anywhere and fit into those small breaks in your day-to-day life.

Looking for some inspiration for your calisthenics workouts? Check out Calisthenics Quotes for Inspiration.

Want your calisthenics content with some yuks? Check out Calisthenics Puns.