Performance jet skis are designed for trick-riding – jumping, flipping, and skimming the waves.

But that takes a lot of skill, and, let’s face it, most of us aren’t that committed.

We just want a chill afternoon on the water with a few easy thrills thrown in.

Luckily, you don’t have to have extraordinary maneuvering skills to get into the air with a jet ski.

There are a few personal watercraft products that make taking flight with a jet ski a breeze.

If you are looking to fly on the water, you can combine the excitement of a jet ski ride with the propulsion of a hydroflyer.

Before embarking on water flight, make sure you know how to use your equipment and are aware of all potential dangers.

You know those jet packs every superhero and supervillain alike seem to own in the movies?

The ones that let them shoot away at a moment’s notice before they get cuffed by the police?

That’s pretty much what a jet ski water jetpack is.

Water jet packs are a combination of a harness and a jet pack that features two tubes or “jets,” which pulls water in and spurts it out at high enough speed to propel a rider up off the surface of the water.

The jet pack has two handles which are used to control direction and height.

Flyboard is technically the brand name of a hydroflight jet board designed much like the jet pack, but, instead of wearing it on your back, you stand on it, much like a skate- or surfboard.

Like the jet pack, hydro fly boards have two jets that create propulsion.

These jets are attached to a flat deck (again, like a skateboard), which has bindings for water boots.

The flyboard is controlled much like a skateboard or surfboard too.

Leaning and shifting bodyweight controls the direction the board goes.

It has no hand controls.

You’re, quite literally, surfing the thrust.

There’s some super cool stuff in this video.

But the part where the dude takes the other dude up and drops him in the water?

Don’t do that. It’s stupid dangerous.

While a jetpack or hydroflight board will get you high above the surface of the water, they are nothing like riding a jet ski.

If you want to capture the experience of riding a jet ski in the air, a jet bike is the flying device you want.

A water jetbike mimics the design of a jet ski or motorcycle with a seat and handles up front. (The handles are a little different than on a jet ski, but it’s the closest you’ll get.)

Jet bikes have only one main jet for thrust with secondary jets used for steering.

And, while some of them are designed with their own propulsion systems, some are designed expressly for use with jet skis.

Which jet ski flying device is right for me?

From the ground, a water flyboard looks more difficult to operate than a jet pack or a jet bike.

Something about having those controls in-hand just looks more natural.

Especially if you’re used to riding a jet ski.

In reality, jet ski jet packs, water fly boards, and water jet bikes are all about equally easy to learn and to use.

Companies that rent these devices claim they can have just about anyone in the air and safely operating in less than 30 minutes.

When it comes to choosing your flying device, it really comes down to what you’re most comfortable controlling. 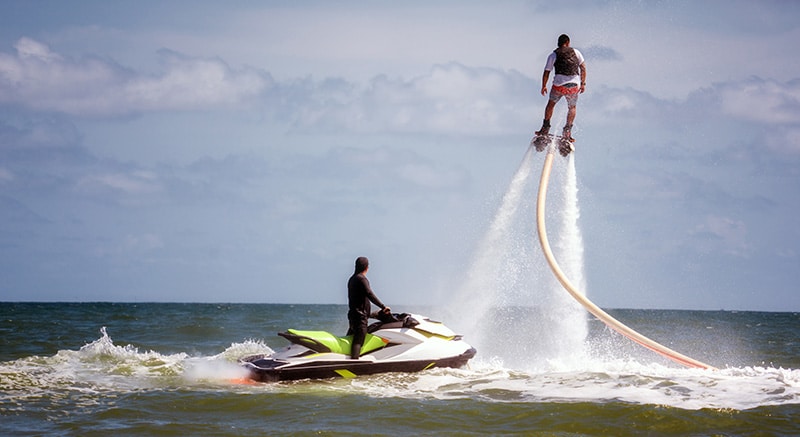 A jetpack leaves your legs dangling, a fly board leaves your arms useless, a jet bike brings your entire body into play.

If you’re used to riding a jet ski, you might feel more comfortable with the controls in your hands like on the jetpack.

If you can ride a skateboard, snowboard or surfboard, you should have no trouble operating a fly board.

But if you want to feel like you’re flying on a jet ski, the jet ski jet bike is about the closest you’re going to get to it without a standalone device.