As a hot sporting commodity (and pricey product with a decent profit margin), jet skis have blipped the radar of many a major brand over the years.

Some of the most popular auto and recreational vehicle manufacturers in the world have thrown their hats into the ring and built their own personal watercraft (PWC).

But, when it comes to performance versus price, the cream rises to the top, and three jet ski makers have become synonymous with quality, relatively affordable PWC for the consumer market.

One of these brands is so synonymous with personal watercraft, it even provided us the now generic term “jet ski.”

These are the top three jet ski brands in the world.

These three brands have been around the longest and have a lot of firsts between them when it comes to the wide release of personal watercraft.

Unsurprisingly, a lot of their success as brands actually comes down to the branding itself. 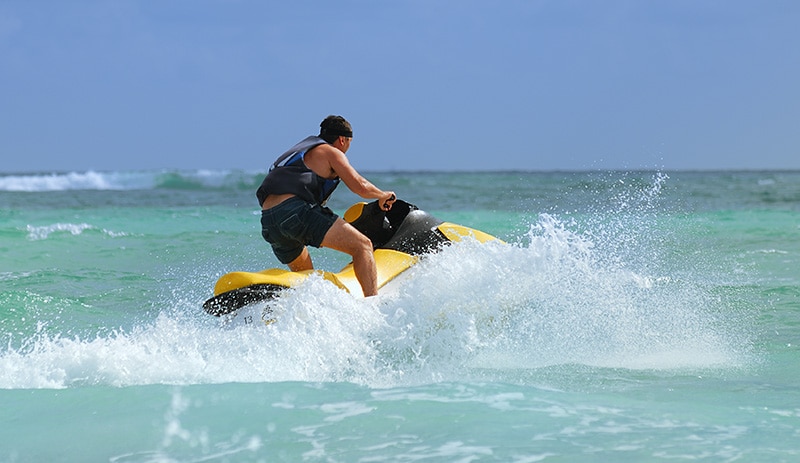 Kawasaki gets the prominent spot on our jet ski brands list because it produced the first successful consumer jet ski, actually called the Kawasaki Jet Ski.

The Kawasaki Jet Ski was a stand-up model that held one person and popularized the very idea of personal watercraft.

Released in 1972, the Jet Ski stood alone in the marketplace for more than 15 years.

Today, Kawasaki makes both sit-down and (one) stand-up models of PWC.

Sea-Doo gets the second spot on our list because it too is a pioneer, making the first (unsuccessful) attempt at a consumer jet ski before successfully returning to the consumer market.

The sit-down model was blasted for being uncomfortable and unreliable and was discontinued after only two years.

Sea-Doo returned to the jet ski market in 1988 with their redesigned sit-down model simply called the Sea-Doo.

In just over five years, this newly designed sit-down Sea-Doo would make up over half the market share.

Today, Sea-Doo produces exclusively sit-down PWC models and boasts the most extensive line on the market.

Where Sea-Doo failed, Yamaha was the first company to succeed, entering the jet ski race with the first successful sit-down PWC, smartly branded the WaveRunner, in 1986.

Today, like Kawasaki, Yamaha produces both sit-down and (one) stand-up models of PWC.

Is this a good name for a personal watercraft company? It’s pretty tongue in cheek.

But Krash jet skis are not your average jet skis.

If their PWC were more affordable, Belassi might be one of the top jet ski brands in the world, because the company’s single model, the Burrasca, is designed with such high-end attention to detail.

Like Krash Industries, though, the Belassi Burrasca is a performance machine built with a specific utility in mind.

In this case, to go very fast.

Belassi produces the fastest jet ski in the world (it’s also the most expensive), and it’s a beautiful machine.

But it’s not available in the U.S. and more of a pro than a consumer model.

While stand-up jet skis fell out of style for a minute (due to environmental concerns and regulations), Kawasaki brought them back to the market in 2017.

Today, the only major jet ski brand not to offer a stand-up model is Sea-Doo.

Brands with stand-up PWCs in their line-up are:

Of them, Krash Industries is the only PWC brand making (almost) exclusively stand-up models.

All personal watercraft manufacturers would like to claim the title of best jet ski brand, but, in truth, jet skis produced by the top brands today are all fairly comparable.

Kawasaki, Sea-Doo, and Yamaha all offer a range of jet ski options from recreational to high-performance.

Kawasaki leans a little more toward the performance end.

The company produces the fastest jet skis in the North American market, perfect for racers and experienced riders.

Sea-Doo offers the most extensive line-up of PWC (by far), including tow sport and fishing models, as well as the lowest starting price.

Which PWC brand is best for you really depends on what kind of performance you are looking for in your jet ski and how you plan to use it.

While there are no other companies making a name producing PWCs today, if you go digging through used-model listings, you’ll still see a few old models floating around the marketplace.

Honda, Polaris, Tigershark, KTM, and even BMW are some PWC models you might find selling used.

Of these, Honda has the best reputation for reliability and performance.

As far as current jet ski brands go, Kawasaki, Sea-Doo, and Yamaha are the big three, making up the lion’s share of sales around the world.

Any one of them will provide you with a high-quality, reliable ride.