Hydro Flasks are designed to keep drinks cold (or hot) for more than 24 hours.

They are also marketed this way.

So, if you see your bottle sweating, you may wonder if you’ve been duped by a sales ploy.

Well, Hydro Flasks shouldn’t sweat, so there is that.

There are times your Hydro Flask bottle might sweat due to no fault in the bottle’s design.

Here, we go through some of the reasons your Hydro Flask might sweat and what to do about them.

Why Your Hydro Flask is Sweating: Reason 1

Depending on what type of Hydro Flask you have, some sweating may be normal.

If you have a standard bottle with a narrower, drinking neck, this area does not have the same amount of insulation as the main part of the bottle.

That means, your Hydro Flask will act like any other bottle and sweat in that area.

As long as your Hydro Flask is only sweating at the neck, it’s working as intended and still insulating your drinks.

If the bottle is sweating all over though, that’s another thing.

Why Your Hydro Flask is Sweating: Reason 2

The seal is broken. 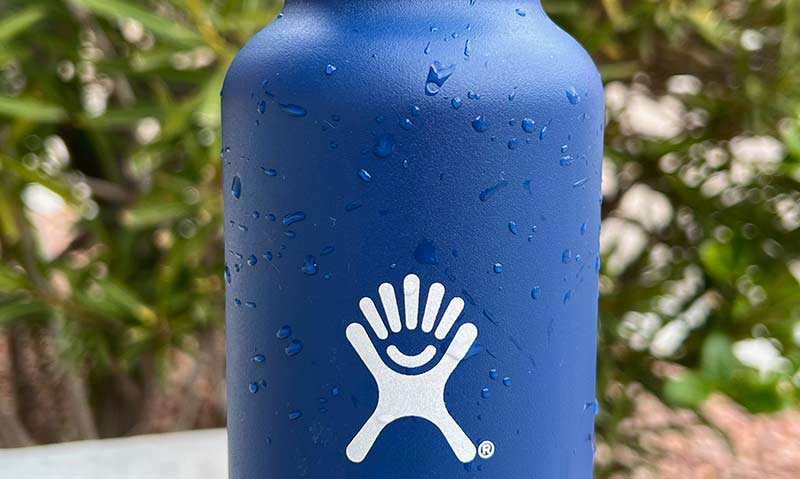 TempShield basically consists of two separate walls (an inner wall and an outer wall) with a vacuum field between.

This is also known as vacuum insulation, though there’s literally nothing to it. That’s what it means.

Between the walls, the air has been sucked out, leaving dead space that cold and heat can’t easily pass through.

When any part of the seal between the two walls on a Hydro Flask breaks, air moves back in and the cold and heat can easily pass through.

Then, your Hydro Flask acts like any standard water bottle, where heat and cold can easily escape, which leads to sweating.

If you think the insulation in your Hydro Flask is broken, you can easily test it on your own.

Hydro Flask recommends filling your Hydro Flask to the neck with boiling water, leaving the lid off, and feeling the outside of the bottle after five minutes.

If it feels hot anywhere, the insulation isn’t working properly and they’ll replace it.

What to do about broken Hydro Flask insulation: If your Hydro Flask bottle hasn’t been damaged in any way, return it to Hydro Flask. The company’s limited lifetime warranty should apply.

If you have dropped your Hydro Flask or otherwise abused it before the insulation fails, buy a new one. You can’t fix it and Hydro Flask’s warranty only applies to “normal and appropriate” use.

Why Your Hydro Flask is Sweating: Reason 3

You put it in the refrigerator or freezer or had it outside in the cold.

If you put your Hydro Flask in the refrigerator or freezer or have it outside with you on a very cold day, the outer wall of the bottle will get cold.

When exposed to warmer temperatures, that cold Hydro Flask will sweat due to the difference in temperatures between the bottle and the air.

What to do about a cold, sweaty Hydro Flask: Don’t put your hydro flask in the refrigerator or freezer.

There’s really no point in doing this anyway.

The same properties that insulate your Hydro Flask to keep liquid cold or warm inside will also keep the liquid inside from cooling in the refrigerator or freezing in the freezer for a very long time.

(Important note: While it’ll take a long time, the liquid inside a Hydro Flask CAN freeze if the bottle is left in a freezer long enough.

While leaving a Hydro Flask in the refrigerator will do no harm, if a Hydro Flask is full and the liquid inside it freezes, it can actually cause the bottle to expand and damage the vacuum seal. This would render the bottle useless AND void its warranty.

So, keep it out of the freezer.)

If you’ve simply taken your Hydro Flask outside on a cold day, don’t worry about the sweating once you get back inside. It won’t last long and doesn’t hurt anything.

Except for maybe your table. But that’s what coasters are for.

While a Hydro Flask that sweats can be annoying and slippery, it’s not always an issue.

And when it is an issue, it’s an issue Hydro Flask’s limited lifetime warranty covers (under normal circumstances).

So, don’t worry if your Hydro Flask gets a little ring around the collar or sweats a little when you take it out of the fridge.

As long as it’s not wet all over every time you use it, you’re probably in the clear.