For the average person who works a forty-hour week, commutes, and endeavors to maintain some sort of social and family life, finding time to exercise can often feel like a challenge. Resistance bands are a great way to put exercise back into your schedule without the need for bulkier, more expensive equipment or a gym membership.

Resistance bands provide strength training and can also be used to enhance a cardio work. They are small and portable, making them an all-in-one workout at home or on the go. And they’re simple to use, which make them perfect for those just getting started with a fitness routine, while still providing plenty of utility for hardcore fitness fanatics.

Resistance bands create tension or resistance as you pull or push them, engaging your muscles and forcing them to work. Bands can be used to perform many of the same exercises as weight machines and free weights, increasing strength, boosting muscle mass, and toning the body.

Resistance bands are more versatile than free weights. Bands can be used in a variety of ways that weights cannot. They can be wrapped around the legs, for instance, to add resistance against the thighs while stepping or doing agility training.

Resistance bands are safer than free weights, especially when working out alone. You don’t need a spotter to use them.

Resistance bands are better for stretching. Loaded or weighted stretching (which involves holding a deep stretch with heavy weights for an extended period) is endorsed by some weightlifters as a means of enhancing flexibility, tendon strength, and muscle growth. Resistance bands are MUCH safer for this variety of stretching, reducing the potential for major muscle tears that can be caused by stretching with too heavy of weights.

Resistance band workouts are harder to measure. Unlike weights, which are marked with numbers and weigh the same from the start to end of a movement, resistance bands change resistance as you change your position with the band. Bands are measured by ranges, such as 25 to 75 pounds, instead of an individual number, which makes it hard to measure your current strength and your growth.

Resistance bands top out at around 200 pounds. This limits their utility for anyone engaging in strength-training above that weight range.

Resistance bands don’t make that satisfying clang when you set them down, indicating a workout well done. 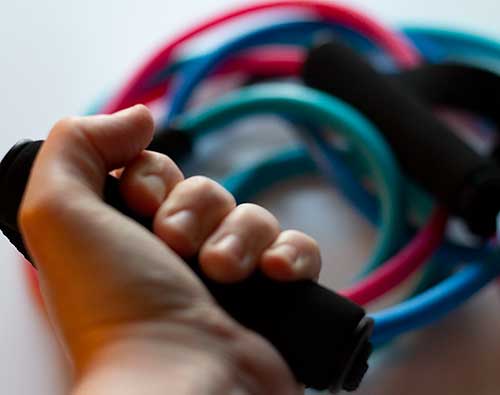 Can you build muscle with resistance bands?

How effective are resistance bands?

When used properly, resistance bands are as effective as traditional weightlifting. It comes down to creating enough resistance with the bands so the exercises challenge your muscles. You should notice that you are getting stronger and that your body appears more toned, the only sure signs of the effectiveness of a weight regimen. You should also experience some soreness within 48 hours after a workout if you are looking to actually build muscle. This soreness indicates the microtears required for changes to muscle mass.

How to Use Resistance Bands

Perhaps the best thing about resistance bands is how easy they are to use, making them ideal for newcomers to strength training. How to use a band differs slightly depending on what type of resistance band (fit-tube, therapy, figure-eight, etc) you are using, but this difference is largely in the way you secure and grip the band. Many of the same exercises can be done with bands of any type.

The best way to learn how to use resistance bands is to just get started with some basic exercises. There are a multitude of online videos demonstrating how to perform specific resistance band movements.

This video from the British Heart Foundation shows several of the simplest exercises you can do with a resistance band, with moves emphasizing both the upper and lower body.

The lateral raises in the above video can be easily modify into a reverse fly. Simply bend forward at the hips, keeping a straight back as shown in this video.

This video targeted at seniors is a good workout for anyone just getting started with resistance bands or for those rehabilitating from an injury.

If you’re looking for a resistance band workout that’s fast and fun, you can’t do much better than this. It has three levels of routine, including a beginner level.

Once you’re more comfortable with your bands and ready to increase the effort, this routine will help you burn calories and build muscle. Be careful with some of the floor exercises until you are comfortable with how to secure the band on your foot.

Resistance bands are relatively safe compared to other exercise equipment, but they do have some dangers. To prevent injury and get the most out of your workout, always keep these tips in mind when using resistance bands.

Use the same amount of control through each movement. Don’t let the bands “snap” your arm or leg back to its starting position. This will prevent potential strains and make exercises more effective.

Always check the resistance band or tube for tears, holes or cracking before use. Do not use a band with any noticeable defects, which can cause a band to rip mid-workout.

Be careful when performing exercises using the legs and feet. When pushing a resistance band with the foot, it’s possible for the band to slip and snap back at you. Think of it like a rubber band, only bigger and more painful. If you feel the band slipping during an exercise, stop the exercise and resituate it before continuing.

Inspect the floor below you before stepping on a resistance band. Any sharp debris on a floor, even a sharp crumb, can puncture the band, increasing the chance it will break during exercise. Rough surfaces can also puncture a resistance band.

Wear rubber-soled athletic shoes to stand on a resistance band and check the bottoms of your shoes for debris before a workout.

Never exercise through discomfort. If it hurts, stop.

If you’re ready to get started with resistance band training, here are some products we recommend.