Thinking about planning a ski trip to catch some of that early powder?

Well, if you’re flying with all your ski gear, then you need to be wary of the weight of everything.

You may even just be curious how much all of that ski gear weighs you down when you’re riding the ski lift or whatever.

We took the time to do some research and come up with the average weight of all the equipment you need to hit the ski slopes.

On average, you’re looking at a weight of 8 pounds to 13 pounds for a pair of recreational downhill skis with bindings.

Keep in mind that the figures below are just averages and if you need the weight of your specific gear, then you’ll need to get those figures on your own.

How Much Do Ski Boots Weigh?

When you compare ski boots, you’ll notice that there is a lot of variety – and that includes the weight of the ski boots.

The average weight you can expect from your ski boots is around 1623 grams (3.5 pounds) for a single boot, or 3426 grams (7.15 pounds) for a pair of ski boots – but it may be more or less depending on which boots you use.

We’ve based our calculation on the alpine and backcountry ski boots sold by evo, which covers the brands: Atomic, Dalbello, K2, Lange, and Salomon.

To get a glimpse at the variety in weights of ski boots, check out the chart below, which cover the weights of the 2021 season ski boot models listed:

*Weights with the source listed as evo were recorded with a MyWeigh 7001DX digital scale using an actual product sample. We weigh one boot with the stock insole in place. These values may vary from the weights listed by manufacturers.

How Much Do Ski Bindings Weigh?

Ski bindings, if you’re not familiar with all of the ski equipment yet, are bits of metal that attach to the skis.

The purpose of ski bindings is to attach and secure your ski boots to your skis.

They are an essential piece of ski gear, and since they are made of metal, they do add some weight to your ski gear.

Ski bindings with a DIN rating for 12 or higher are usually around 5 pounds (2268 grams) in weight for the set, but there are also more lightweight binding sets that target backcountry skiers and these bindings usually weigh under 4 pounds (1814 grams) for the set.

To get a glimpse at the variety in weights of ski bindings, check out the chart below, which cover the weights of the 2021 season ski binding sets sold by evo:

How Much Do Skis Weigh?

When you compare skis, you’ll notice that there is a lot of variety – and that includes the weight of the skis.

We’ve based our calculation on the alpine and backcountry skis sold by evo.

To get a glimpse at the variety in weights of skis, check out the chart below, which cover the weights of the 2022 season ski models listed below:

Weights with the source listed as “evo” were recorded with a MyWeigh 7001DX digital scale using an actual product sample. We pick a single ski at random rather than weighing several skis and averaging the weights. Weight between two skis in a pair is seldom the same due to production variation. View the updated chart here.

How Much Do Ski Poles Weigh?

The weight of ski poles varies depending on what the poles are made of.

Ski poles can be made of carbon fiber, aluminum, or composite.

On average, a pair of ski poles weighs one pound.

Ski poles are one of the more lightweight pieces of equipment that you’ll use when skiing. 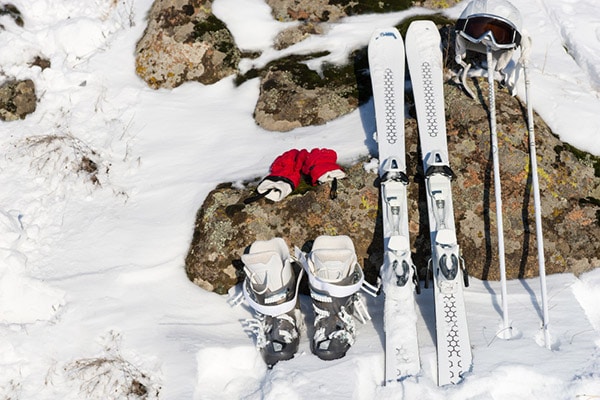 How Much Do Ski Goggles Weigh?

Though you might not even think about consider the weight of your ski goggles, the truth is that it’s just as important as the rest of your gear.

On the low end, you’re looking at ski goggles with a weight of only 0.5 pounds, but they can get as heavy at 2 pounds.

If your goggles are too heavy, then it can cause some strain your neck.

That’s why beginner’s should stick with a more lightweight ski goggle.

As you can see, ski equipment can end up weighing quite a bit once you’re completely outfitted and ready to hit the slopes.

And the gear that you purchase may weigh more or less than the averages that we’ve listed in the article above.

Keep in mind that you can shop for your ski gear by focusing on the most lightweight options.