New to snowboarding or wakeboarding? You may think the two are similar.

But are they really?

These two sports do have a lot in common, but they also have major differences.

Here’s what to know about wakeboarding versus snowboarding.

What Snowboarding And Wakeboarding Have In Common

At first glance, it’s easy to see that these two sports have a lot in common.

So yeah, that’s a lot of things to share in common.

But, these two sports also have distinct differences. 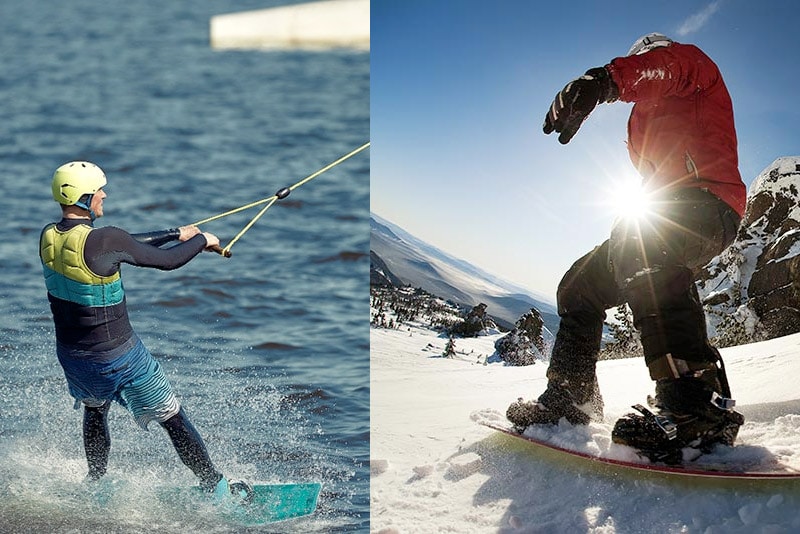 How Snowboarding And Wakeboarding Are Different

But that’s really just the start of how these two sports differ from each other.

Also, wakeboards have fins on the underside and snowboards do not have fins (obviously, cause they don’t go in the water).

With wakeboarding, you may need a wetsuit if the water is cold, or you can just don swimwear. You’ll also need to wear a life jacket.

Wakeboarding also requires a boat to actually pull the wakeboarder.

Not counting the cost of the boat, it is generally cheaper to take up wakeboarding than snowboarding.

Both wakeboarding and snowboarding require that you have good physical strength, but where you need that strength varies a bit between the two.

Specifically, with wakeboarding you need to have strong arms and upper body strength because you need to hold onto the tow rope while you’re out on the water.

This means you also need to be able to keep a strong grip on that tow line since it is being pulled by the boat.

You don’t need strong arms to do snowboarding.

And don’t forget with snowboarding that you gotta learn how to use the chair lift to get to the top of the mountain. That can be a daunting task on its own.

Is Wakeboarding or Snowboarding Harder?

If you’re not experienced in either of these sports, then you may want to get started with the one that is easier to learn.

Why is snowboarding harder? Because it’s all about you and your physical abilities and balance.

With wakeboarding, you have the tow line that you’re holding onto, which helps a great deal with balance.

Basically, once you are upright and standing on your wakeboard, the sport is relatively easy to learn – as long as your boat driver isn’t too erratic with the speed.

One key thing to keep in mind, is that if you can snowboard then you can wakeboard, and vice versa.

The truth is that most board sports share so much in common that it’s easy to pick up other board sports once you know one of them well.