Wetsuits offer protection for a variety of activities or sporting competitions.

They are often worn by people that spend a considerable amount of time in the water.

People that have little to no experience with purchasing or wearing wetsuits may wonder why they are black.

Some athletes may wonder, “Why are wetsuits usually black?”

Learn the reasons that the preferred color for wetsuits is black, and why some people shy away from certain colors when purchasing or wearing their wetsuits.

Page Contents show
What is a Wetsuit?
Why are Wetsuits Black?
Avoiding Yum-Yum Yellow and Other Bright Colors
Caring for Your Black Wetsuit

What is a Wetsuit?

The first important point to consider prior to purchasing a wetsuit is to understand what a wetsuit is and how to wear it.

A wetsuit, according to National Geographic, is a specialized suit that people wear when spending a lot of time in the water.

Some people may expand on the definition by indicating that it is not worn just by individuals that spend a lot of time in the water, but even by beginners that decide to start spending time in the water.

There are different styles of wetsuits that are made to be worn in different water conditions, or for the needs of the individuals that wear the wetsuit.

Wetsuits are worn for a variety of conditions and activities, including swimming, diving, surfing, paddle boarding, spearfishing, and other activities.

Triathletes often wear wetsuits for the swimming portion of their competitions. 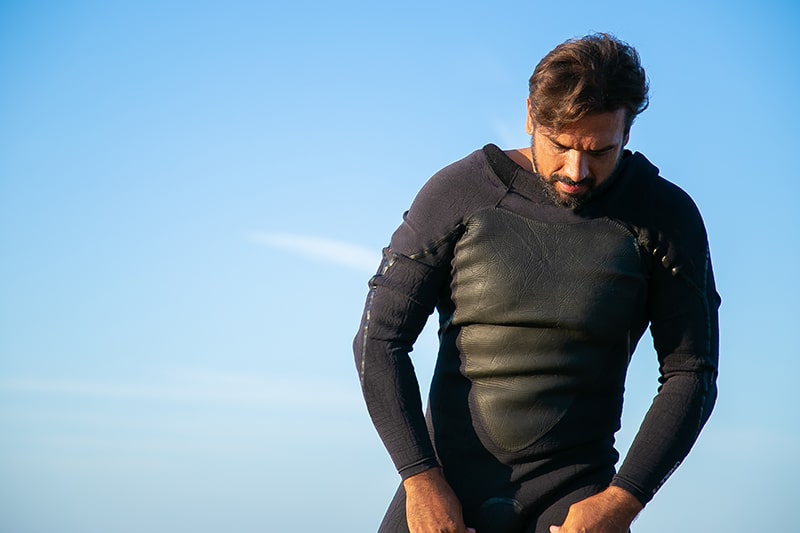 Why are Wetsuits Black?

There are a variety of colors available for wetsuits. Some come in bright, neon colors, while others may be black with neon or bright colors added to the design of the black suit.

Some black wetsuits may also have white stripes, or other details in white on the suit.

So, why is the wetsuit color worn by most professionals or experienced wetsuit wearers the solid black option?

There are a variety of reasons, including:

Carbon black is added to the neoprene during the manufacturing process.

This process turns the material black.

The result is that black wetsuits create UV protection, and absorb the photons and the damaging light from the rays.

Black wetsuits help to regulate body temperature better than other colors of wetsuits.

People that put on a wetsuit do not plan on spending just a few minutes in the water.

They want to stay in the water for extended periods.

Wearing a black wetsuit that absorbs more heat compared to other colors of wetsuits, helps provide the necessary insulation and regulates the body temperature to allow wearers to stay in the water longer.

Does it seem strange that black wetsuits last longer than other colors of wetsuits?

The carbon black that is added to the neoprene during manufacturing reduces oxidation and the natural aging of the material.

Wetsuits that do not have carbon black added during manufacturing age faster, and are potentially more susceptible to wear and tear because of water pressure.

The black wetsuit reduces the degrading process that occurs because of salt, prolonged exposure to the sun, and varying water temperatures.

There is a joke about wearing yellow among some surfers, divers, and other people that are experienced with wearing wetsuits.

Yellow is referred to as “yum-yum yellow” because it is often considered as an attraction to sharks.

The Florida Museum of Natural History International Shark Attack File even indicates that shark researchers refer to the color as “yum-yum yellow.”

How is it that yellow and other bright colors may be highly visible to sharks when they are considered to be color-blind?

Researchers concluded in several studies that while sharks may not actually be able to detect whether your wetsuit is bright yellow or bright pink or bright white, they can still determine that you are there.

The reason is that brighter colors reflect in the water and sharks can detect and compare brighter objects against the dark background of the water.

The same reasons that people are advised to choose black wetsuits rather than colored ones is the same reason that divers and other people that enjoy the water are advised not to wear jewelry when they go into the water.

The glistening gold, bright silver or other colors of the jewelry may attract a shark.

Caring for Your Black Wetsuit

Caring for black wetsuits is crucial to their wear and safety.

There are ways to prolong its longevity, within reason.

One important part of caring for wetsuits involves putting them on the right way.

Always pull it up using your fingers, and not your nails. Fingernails may cause tears.

Products are available to patch small tears, but it is important that you do not wear the wetsuit until completion of the repair.

Suppliers or manufacturers may help with repairs of your black wetsuit.

On the other hand, it may just be time to purchase a new one.

ust make sure that it is a black wetsuit without other colors or yum-yum yellow details.