Kickstands may seem like an essential accessory for bicycles, but most road bikes do not feature the stabilizing tool.

You may be wondering why that’s the case because kickstands seem like they’d be a useful addition, but most road racers, cyclists, and hobbyists would agree that they’re not as functional as they may seem.

In this article, we’ll explore when a kickstand could be beneficial, its downsides, and why road bikes seem to skip out on this feature entirely.

What is a Kickstand?

In case you’re new to the world of road bikes and cycling, kickstands are a small metal accessory attached to the lower frame of your bicycle.

Cyclists can extend the kickstand outwards to prop the bike up when it’s not in use.

The kickstand will hold the bike upright when it’s pushed out, and you can kick it back up out of the way when you’re ready to ride again.

The kickstand appears to be most useful for bike users when they don’t have another method of propping their bike up.

It gives riders the freedom to stop their bicycle and let it stand upright without necessarily having to prop it up against something else.

Generally, if there’s a bike stand or storage option available for cyclists, they store their bikes that way.

If there’s any surface available that a bike could be propped against and locked into, it makes for optimal bicycle storage.

Lean the bike frame or prop the bike’s back wheel against something sturdy for support.

In those situations, the kickstand doesn’t serve much of a purpose.

There’s no reason for bicyclists to extend a kickstand while the bike is already locked in place. 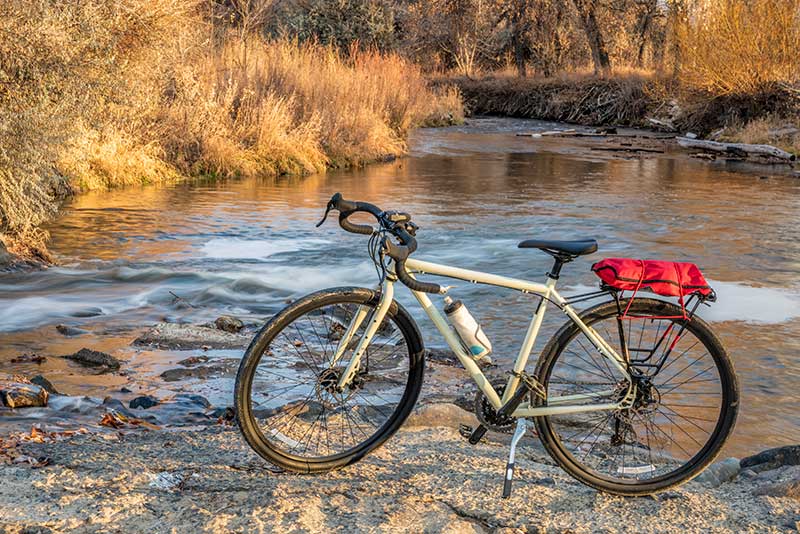 For road bikes, in particular, there are a few downsides to using kickstands, and cyclists steer clear of the miniature mechanism because of them.

Some of the limitations could cause more significant damage to the bike itself, and some are based on a cyclist’s preferences.

The bicycle requires a heavier frame and a wider tire to measure up to challenging trails and steep inclines.

Heavy bikes aren’t knocked over easily and can potentially benefit from a stabilizing feature, like a kickstand.

Road bikes, however, are not designed to battle rough terrain or off-roading of any kind.

Designers created this bike to ride extremely fast and smooth over asphalt or pavement.

Their tires are skinny, and their handlebars are slightly dropped forward.

This design makes for an excellent racing bike because it is so lightweight.

However, the lighter the weight, the easier it is for the bike to fall over when it isn’t in use.

A strong gust of wind can easily take down the bicycle, and a kickstand isn’t sturdy or heavy enough to hold it in place.

The lightest road bikes are typically used by professional racers and people with a significant budget for biking.

These lightweight bikes are an investment for riders and should be adequately cared for.

A kickstand won’t serve as sufficient security or reliable stability for your bike.

It may be best to find a steadier method of storing your road bike to protect your investment.

Road bikes are the go-to racing bike for professionals and amateur racers alike.

Its lightweight design makes this bicycle incredibly aerodynamic; the frame is sleek, the wheels are thin, and even the seat and handlebars are made to take up little space.

A kickstand could disrupt the careful aerodynamics of your road bike.

It won’t add much drag to your ride, but the resistance it does create could make a difference for professional racers.

Adding a kickstand will slightly increase your bike’s weight; granted, depending on the kickstand you purchase (and the materials it’s made of), it likely won’t be much weight at all.

However, if aerodynamics and a lightweight bike are crucial to you, there’s no need for a kickstand.

It’ll simply slow and weigh you down.

For most cyclists, after some time or prolonged use, the kickstand will need maintenance.

Just like the rest of the bike, it’ll need to be checked and tightened.

Eventually, the bolts will loosen again and again, and the more you tighten them, the more pressure it’ll put on your bike and its frame.

After evaluating the potential downsides of a kickstand, like its general lack of usefulness and added weight on a vehicle designed for its lightweight-ness, you may decide you’d prefer one of these stabilizing tools.

If your road bike didn’t come with a kickstand, you could add an aftermarket one.

“Aftermarket” generally refers to the modifications added to a product to either repair, enhance, or alter its quality.

An aftermarket kickstand is one that you add to the bike because the manufacturer didn’t already include it during production.

We recommend that you exercise a bit of caution if you’re adding a road bike kickstand.

Road bikes are often pretty expensive, and a permanent kickstand could lower its value.

The frame, especially if it’s made of aluminum, could suffer a bit of damage if the kickstand isn’t carefully installed.

If you’d like to avoid permanently altering your bike, look for temporary kickstands instead.

Some attach to your bike’s thru-axle or rear skewer for easy, non-permanent installment.

The kickstand can then be attached or removed whenever you prefer.

A kickstand on a road bike isn’t a feature you see too often.

Avid-cyclists tend to avoid adding the device out of concern that it could weigh them down, add drag, or generally get caught on things.

The kickstand isn’t particularly necessary with such lightweight bikes because they usually aren’t sturdy or strong enough to keep road bikes upright on their own.

Whether you’d like a kickstand or not is entirely up to you and your preferences.

You may find that the downsides don’t impact you and your ride that much.

In which case, add a kickstand. It’s your bike, so enjoy it!