Whether you use a road bike to commute to work or compete in a road race, at some point, you have probably thought about its weight.

Your road bike’s weight doesn’t just determine how fast you go, it also plays a factor in how easy it is to hoist your bike up a set of stairs or into the back of your car.

A road bike’s weight matters, at least to a certain degree, and professionals are not the only ones obsessing over their bike’s weight.

Hobby cyclists who want to get the best road bike for their buck naturally also carefully consider its specs before buying.

Read ahead to learn more about how much road bikes weigh, how much that affects the bike’s cost, and to what extent the weight matters for the average cyclist.

Road bikes are built for speed, so it is no surprise that they are among the lightest types of bikes out there.

Because they are intended to be ridden on smooth surfaces, they have a more delicate build than off-road bikes, which need to be more sturdy for rough terrain.

The average road bike weighs around 18 pounds, but road bikes can range from as little as 10 pounds to as much as 25-27 pounds.

Keep in mind that to be used in official competition, a road bike cannot weigh less than 14.99 pounds, though lighter models do exist.

Because of this rule, the bikes the pros are riding in major international competitions, such as the Tour de France, are no lighter than 14.99 pounds. 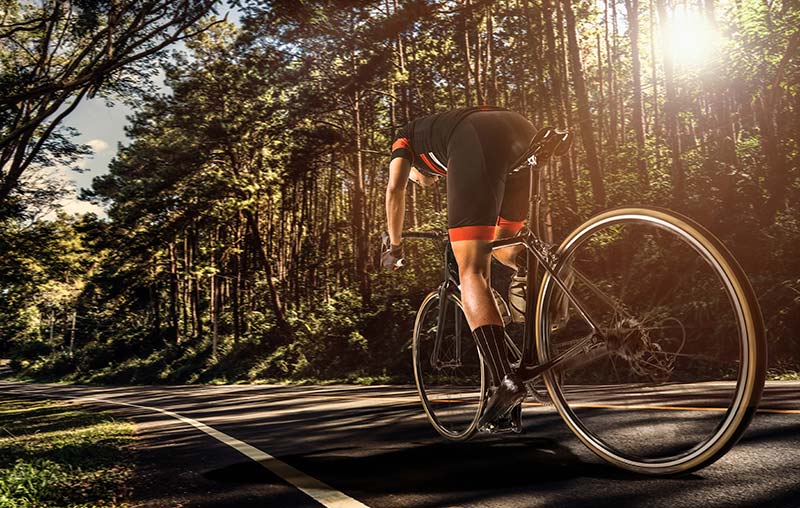 Road bicycle weights depend on several factors, including their size, the frame material, and the wheel weight.

When it comes to size, it goes without saying that the bigger the bike, the heavier it will be.

Today, road bike frames are most commonly made from aluminum or carbon fiber, though you can easily find titanium and steel, too.

Carbon fiber is what the pros ride. It is more lightweight but is also pricier than other materials.

Aluminum is usually heavier but is less expensive.

Without the rest of the bike components attached, a carbon fiber frame can weigh as little as two pounds, while titanium and aluminum frames are at least twice as heavy.

Steel frames weigh the most and can reach upwards of 10 pounds.

The wheels are usually the heaviest component of a road bike.

Road bike wheel weight ranges widely from less than half a pound to more than 2.5 pounds each.

There is some debate in the biking community whether a lighter frame or lighter wheels make a bigger difference in speed.

If there is a difference, it is inconsequential for almost any biker other than a top professional competitor.

As an example, the winner of the 2020 Tour de France rode the Colnago V3Rs.

It was outfitted with Vittoria Corsa Speed Graphene 2.0 TLR tubeless tires that weigh about half a pound each.

You probably have guessed by now that lighter road bikes are more expensive than heavier models.

As a rule of thumb, the better the technology, the lighter the bike, and the more expensive it will be.

However, experts note that any perceivable benefits usually peak at around $5,000, and there is not a huge difference between bikes after that.

To this point, the frame of the Colnago V3Rs, the 2020 Tour de France winner’s bike, cost approximately $5,000, which is fairly conservative when you think about a professional cyclist’s budget.

Aluminum road bikes are among the least expensive on the market.

You can find an aluminum bike for several hundred dollars, but nicer models can run up to several thousand dollars.

Steel road bikes tend to be a little more expensive than aluminum.

As we already discussed, the priciest road bike models are made from carbon fiber and can be as expensive as $15,000 or more.

Does Weight Make a Difference

The weight of a road bike matters to a certain extent, even for hobby cyclists.

It makes sense that the lighter the bike, the less work you have to do to go faster, especially in less optimal conditions, such as going uphill.

At some point, you will have to lift your bike, so the lighter it is, the easier it will be to carry.

While you want to look for a road bike on the lower end of the weight range, at the end of the day, splitting hairs over the difference between a pound or two doesn’t make sense for most cyclists, especially when the price is a consideration.

For riders on a budget, it does not make sense to spend an extra thousand dollars to shed a pound of weight.

A good road bike that falls in the average weight range of 17-18 pounds will work well for hobby cyclists and those who ride for sport.

Only the top competitors, who are looking to shave seconds off their competition time, should worry about weight below this range.

A road bike’s weight is important to a certain extent but should be balanced against other considerations, such as quality and price.

A road bike in this weight range will work well for both hobby cyclists and competitive ridders.

There are only two categories of cyclists that should worry about bikes that weigh less than that.

One category is the professional rider who wants to shave seconds off their race time.

The other is the cyclist who has an unlimited budget and wants the best road bike that money can buy.