Most areas of Connecticut have bicycling trails, both in the cities and the countrysides.

Some abandoned railroad tracks have been made into long trails, while there are many shorter ones in and around cities.

State parks are also a great place for cycling in Connecticut.

Many trails connect with each other, so, with a little planning, you can travel a long way through the state.

Farmington Canal Heritage Trail is a 40-mile ride from the Yale University campus to New Haven. It uses a lot of old rail beds and the New Haven Harbor is one endpoint. The trail follows the defunct Farmington Canal and has different segments and types of terrain. It passes through towns with some wooded areas between.

East Rock Park offers a 10-mile loop through its 425-acre landscape. The trail has great views of New Haven, wooded areas, and fields.

Savin Rock Trail is a 1.2-mile trail for beginners along the New Haven seashore.

The city also has many marked miles of bike lanes across the city, as well as a couple of two-way protected cycle tracks.

Farmington is the endpoint of the Canal Heritage Trail, and the beginning of the Farmington River Trail. It is a 26-mile loop that goes past abandoned mills, waterfalls, forests, and prairies. Most of it is paved and a lot of riders say it is the most beautiful trail in all of New England.

The Pequonnock Greenway is a nine-mile trail that begins at a seaside park in Bridgeport and ends at Trumbull. The trail is mostly shaded with trees and goes through a lot of parks.

A trail from Bridgeport to Newton is almost complete, with much of it already ridable.

Seaside Park in Bridgeport is an easy trail. It is a four-mile loop and has a great view of the sea.

The Larkin State Park trail runs 10.8 miles through woods and around lakes. (Some of it is an old rail trail.)

The Middlebury Greenway is a 4.5-mile paved trail also used by pedestrians.  It goes from near Waterbury to Quassy Amusement Park. (Yes, they have bike parking!)

Stamford is the place to be for serious cyclists in Connecticut. There are 21 trails in the immediate area.

Downtown Stamford has some great CT bike paths and there is ample bike parking. The bike trail through the city streets has marked bike lanes. It could be argued Stamford has the best-developed system for bicycles in the state.

Many of the trails around the city are old rail beds, varying between four and 22 miles. They are well-marked and maintained.

Hartford is the most recent Connecticut city to be named “bike-friendly” by the League of American Bicyclists. The other bike-friendly Connecticut cities are Farmington, Glastonbury, New Britain, New Haven, Simsbury, South Windsor, and West Hartford.

The Captain John Bissel Trail in Hartford is one of the best and comes in two parts – a 4.5 mile bike trail and 2.9 miles of quality street biking. The trail passes under interstates, across rivers, and into some wooded areas. 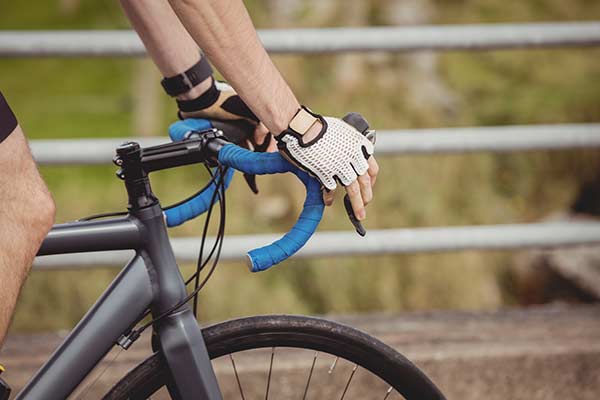 The Rails to Trails program has converted thousands of miles of abandoned railroad tracks all across the U.S. into trails for biking and hiking. Many old Connecticut railroad lines have been given the Rails to Trails treatment. Some of these trails are very long and some connect up with others trails in the state.

Airline Trail goes along what was once the primary rail line between New York and Boston.  It covers 21 miles and the surface is crushed stone. It is a level easy ride. The trail goes through some beautiful wooded areas with small creeks, lakes, and historic sights.

The Monroe Housatonic Rail Trail is only five miles long, but it makes a big impression. It goes through a heavily wooded area with lots of streams and some old bridges. It connects with the Newtown Trail, which is much longer but not yet developed.

The Trumbull Rail Trail through Fairfield County, along the Pequonnock Greenway, is another relatively short ride at just under 10 miles. This is a heavily forested area and the most scenic area of the Greenway.

Hop River State Park Trail is 20 miles of converted rail line in Hartford and Tolland Counties. The trail runs from the Willimantic River Bridge (in Willimantic) to Manchester. It goes through dense forest, three tunnels, and a covered bridge.  At Manchester, you can connect with a four-mile trail that was once a rail spur.

The Windsor Locks Canal State Park Trail is not exactly a converted rail, but it’s close to it. The trail runs 4.5 miles along the towpath of a 170-year-old canal. It is flat and offers great views of the river and old canal. The trail goes from Suffield to Windsor Locks.

Road cyclists are treated the same as vehicles and must follow the same rules of the road. That means cyclists must ride with traffic, stop at stop signs and stoplights, and signal to turn (hand signals or connected light signals).

Along with traffic laws, Connecticut has some laws expressly aimed at bikers.

Cyclists may ride two abreast in a single lane, but not more than two.

Small children accompanied by an adult may ride bicycles on sidewalks in Connecticut.

It is not illegal for adults to ride bicycles on sidewalks state-wide, but some cities have ordinances in place that dictate where and when adults may ride on sidewalks.

Before riding your bike on the sidewalk, make sure to check city ordinances. 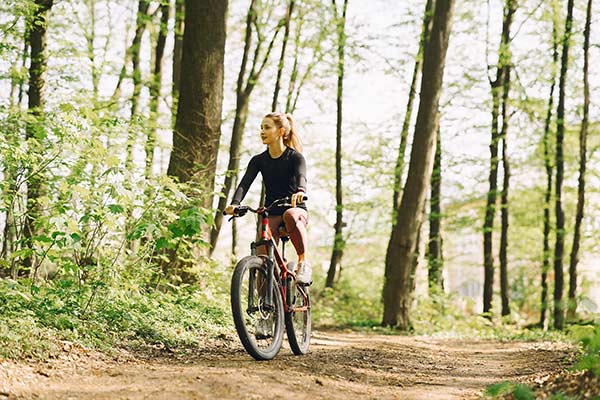 Connecticut may not be known for its mountainous terrain, but for a small, not particularly lofty state it boasts some pretty impressive and rugged biking options.

Mianus River State Park is a state park between Stamford and Greenwich which contains 8+ miles of trails. The trails are old logging roads and paths. The Mianus River flows to one side; the rest of it is woodlands. Biking isn’t permitted in the Greenwich-owned section of the park, but Stamford owns the biggest portion, so you’ll still have plenty of miles to explore.

Nassahegon State Forest takes up 1350 acres near Burlington and is a watershed for a trout fishery. There are about 15 miles of trails with varying skill levels. The long, fairly flat trails are perfect for beginners, while some moderate climbs and descents provide resistance for those seeking a challenge.

Hook the Nassahegon State Forest trails up with the other mountain bike trails in and around Burlington, and you’re talking 40 miles of trails specifically made for mountain bikers.

If you are really experienced and like a hard ride, you might prefer Millers Pond State Park. It’s near Durham and Haddan, and the trails go around a large man-made pond. The trail is designed to be difficult and provide plenty of challenge, and is maintained with that purpose in mind.

Another trail system created with mountain bikers in mind, The Rockland Preserve offers trails for bikers of all skill levels. It’s located near Madison.

If you want to learn more about the place you’re riding, West Rock Ridge State Park offers an easy mountain bike ride with a view as well as some history. The land was a hideout for a couple of English judges who had a part in killing King Charles I. There are 11 miles of dirt trails that touch New Haven, Hamden, and Woodbridge. The dirt trails are wide with some hills but fairly easy.