Ah, nature. There’s nothing like a kayak for getting away from the modern world.

You can slide into your favorite waterway and find serenity communing with the outdoors.

Who doesn’t enjoy the zen-like lapping of the water and scanning the horizon for elegant wildlife?

But wait…you might have to fill out some forms first.

Yes, when you bought your kayak, these were just the types of hassles wanted to forget.

However, you can’t always escape from bureaucracy.

Before you hit the water, you have to ask yourself a few questions.

Chief among these: do you have to register a kayak? The short answer: sometimes. The rules vary from state to state.

Many areas don’t require any form of registration.

Others mandate that any watercraft—no matter the size, composition, or mode of propulsion—needs to have the proper documentation. 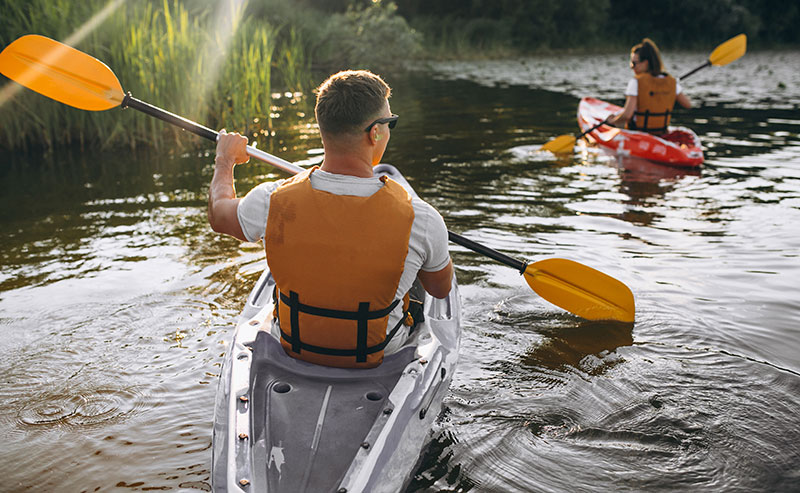 Page Contents show
Why Is Registration Necessary?
Traditional Kayak Vs. Inflatable Kayak
Easier Transportation by Vehicle
Easier Transportation to the Water
Lower Cost
Easier Storage
Do Kayaks Have to be Registered?
Specific State Laws
Delaware
Iowa
Massachusetts
Minnesota
Ohio
Washington, DC
Who Handles the Registration of Kayaks and Inflatable Kayaks?
Are You Ready to Get on the Water?

Why Is Registration Necessary?

The fact that kayaks sometimes require registration comes as a surprise to many first-time buyers.

After all, the appeal of these products largely comes from their convenience and portability.

They seem too inconsequential to need a trip to the DMV or DNR.

This is especially true for the inflatable version.

Sure, register all the yachts and speedboats you want, but a single-person inflatable kayak?

However, many governments don’t see it that way.

They want to protect their natural resources and see registration as a way to accomplish this.

What’s more, the process also acts as a revenue-generating activity.

The cash brought in through registration can be used to preserve the waterways you want to kayak.

With that list in your mind, it isn’t strange that some governments add kayaks and inflatable kayaks.

If you want serious performance and long-term durability, you probably want to stick with a traditional rigid kayak.

However, inflatable kayaks represent an excellent option for taking your water adventures on the road.

The inflatable models are compact and easy to transport.

This makes them a perfect choice for kayakers wanting to venture out of home waters and find new sights far from home.

Filled with air, the inflatable kayak resembles a cross between a kayak and an inflatable raft.

It has the shape and general performance of a kayak, but in a different form.

Think of the comparison of an inflatable mattress and a regular one.

That will give you a basic idea.

If you have to register both kinds of kayaks, what’s the advantage of an inflatable model?

Why would you choose the blow-up version versus the so-called “real thing?”

Here are a few to keep in mind:

The main advantage of the inflatable kayak doesn’t come when it’s blown up.

It comes when you deflate it.

Without the air inside, the product is small enough to fit in the trunk of a car.

Compare that to a traditional rigid kayak.

These products are large and awkward to transport. Typically, users need to strap them to the roof of their vehicles or tow them on a separate trailer.

This can be difficult even for a solo traveler. But imagine trying to transport the kayaks needed for a family of five. It can make many trips nearly logistically impossible.

Easier Transportation to the Water

Yes, it’s easier to drive with your inflatable kayak, but the transportation advantages don’t end there.

Once you reach your perfect kayaking location, you still need to get the craft into the water.

Transportation from your vehicle to the water also poses a challenge for rigid kayaks.

The inflatable models ease this burden. In their deflated form, they can be carried to the edge of the water and inflated there.

Inflatable kayaks tend to be made of high-quality materials.

They have to survive all the bumps and rock-scraping that come with the activity.

Still, even with this construction, the inflatable kayaks remain cheaper than their traditional counterparts.

The same superpower that allows the inflatable kayak fit into the trunk of your car also helps with long-term storage.

Rigid kayaks take up enormous space in a garage.

Not so with the inflatable types.

They can often get folded onto a shelf or in a discreet corner.

Do Kayaks Have to be Registered?

As we’ve mentioned, the rules on registration differ based on individual state legislation.

Basically, it matters where you plan to kayak.

Some areas have strict rules, requiring every kayak to receive the proper paperwork.

Others don’t require registration at all.

A third category of jurisdictions make exceptions for some crafts, but want registration for others.

There are two basic questions that come up in these “sometimes” states:

Fundamentally, the use of a motor makes any boat (and we’re throwing kayaks into this category for now) more likely to need registration.

Similarly, bigger kayaks need to go through a formal bureaucratic process more often than smaller ones.

It can also matter whether you plan on using your kayak on state lands or in a private waterway.

The rules are stricter for the public areas.

For private land, registration is often not necessary, no matter what other rules exist.

Typically, though, those distinctions don’t matter.

The main questions that apply relate more to size and whether a motor is involved.

Most states don’t require the registration of small non-motorized watercraft.

That means you don’t need to file paperwork for products like canoes or kayaks (inflatable or otherwise).

However, it’s important to note the way these laws are usually written.

It’s not like the legislators include language that says something like “you don’t need to register your inflatable kayak.”

Rather, the laws mention other types of boats and don’t mention the inflatable kayak.

They just aren’t listed among the things that require registration.

For instance, Louisiana generally calls for the registration of all watercraft.

However, the language of the law states: “the owner of each motorboat, houseboat, or sailboat…”

No mention of kayaks or canoes in the legislation.

For a similar example, you can look to Kentucky’s law.

The meat of the appropriate section states: “every motorboat on the waters of this state shall be numbered and currently registered.”

As a result of this, it can sometimes be difficult to determine the exact rules in a particular state.

Reading the specific legislation, you’re often looking for what’s not there.

But if there is any confusion, just contact the authorities in that jurisdiction.

They can let you know the right thing to do.

Still, there are some obvious cases we should mention.

Here are the states that have some definite rules regarding the registration of kayaks or inflatable kayaks:

Delaware doesn’t get much credit as a travel destination.

Located on the Eastern seaboard, it has ocean access, as well as its fair share of rivers and ponds.

However, the rules about inflatable kayak registration are relatively strict in the state.

Delaware requires all inflatable watercraft (including kayaks) to be registered.

Iowa is a landlocked state known for endless expanses of cornfields.

Why would anyone need a kayak in such a waterless state?

Well, it’s not as bad as all that.

Iowa actually boasts a rather extensive series of water trials.

You’ll find 18,000 miles of navigable rivers and creeks in the Hawkeye State.

However, the state requires the proper paperwork for models that are longer than 13 feet.

The only other exception: if you plan on using a motor on your kayak or inflatable kayak, you’ll need registration as well.

Here’s another state on the east coast with its fair share of excellent kayaking locations.

You can find a series of state parks with excellent waterways.

The only test here is whether you plan to use a motor.

However, if you plan on exclusively using paddle power, Massachusetts does not require you to register your kayak.

You probably wouldn’t want to plan a trip for January, when you might find a few feet of snow on the ground.

However, a place famous for its lakes makes a perfect summer kayaking destination.

Again, the test for the registration comes down to length and the presence of a motor.

Any motorized watercraft requires the proper paperwork in the state.

Meanwhile, a kayak shorter than ten feet does not require registration.

Ohio is a large state that sits along the Great Lakes.

It stands to reason that it supports a large number of great kayaking sites.

Besides areas along Lake Erie, you’ll also find plenty of state and national parks in the southern part of the state.

Unfortunately, Ohio is one of those strict jurisdictions.

The state imposes a broad registration policy, including kayaks and inflatable kayaks.

The only exceptions are extremely small water implements, like kiteboards and paddleboards.

However, it is built along the Potomac River, giving plenty of picturesque spots to use your kayak.

As you might guess from the home of the U.S. Congress, the laws in Washington are relatively strict as well.

All watercraft require registration, even smaller kayaks and inflatable kayaks that just use paddle power.

Who Handles the Registration of Kayaks and Inflatable Kayaks?

Many states handle the registration of watercraft through the same bureaucratic structure used for cars and trucks.

That means the same department will handle all types of vehicles.

So for many jurisdictions, you should look to the Department of Motor Vehicles, or DMV (some states give it a different name, but that’s the most common title for the organization.)

If you have any questions about registration for your kayak or inflatable kayak, you should start there.

In other areas, the registration of inflatable kayaks will fall under a different jurisdiction.

In these cases, you can usually find the information you need through the Department of Natural Resources, or DNR.

If the DMV proves a dead end, that should be your next stop.

It’s important to note that these rules can change over time.

For instance, Illinois used to have relatively strict rules about registration.

Then, in 2018, it passed an amendment to its previous laws.

This eliminated the need to register inflatable watercraft that don’t use motors.

Given this fact, you should always double-check.

Before accidentally violating the rules, investigate your particular state and make sure whether registration is necessary or not.

This will save you headaches and misunderstandings later.

Are You Ready to Get on the Water?

You head to the wilderness to leave these behind.

That’s why you bought those kayaks or inflatable kayaks in the first place.

You wanted to stuff them in your trunk or strap them to your roof, drive to an out-of-the-way lake, and paddle your troubles away.

Unfortunately, you might have one last hassle to deal with on your way out of town.

While most states don’t require the registration of kayaks and inflatable kayaks, that fact isn’t universal.

You’ll have to double-check before you hit the water.

Even in those strict states (we’re looking at you, Ohio), it’s just one more form to file before you get your respite.

Before you know it, you’ll have the sounds of waves and wildlife to ease your spirit.