Running is simple, yet hard.

It’s a basic movement that also asks a lot of your body.

It’s intense, it’s tiring, and the faster or longer you run, the more intense and tiring it becomes.

Simply put, running is a heck of a workout that can take some motivation to get up and do.

If you’re new to running, or just need some motivation to tie up your laces and hit the path, these inspirational running quotes should give you all the encouragement you need.

Running Quotes About Running for Fitness 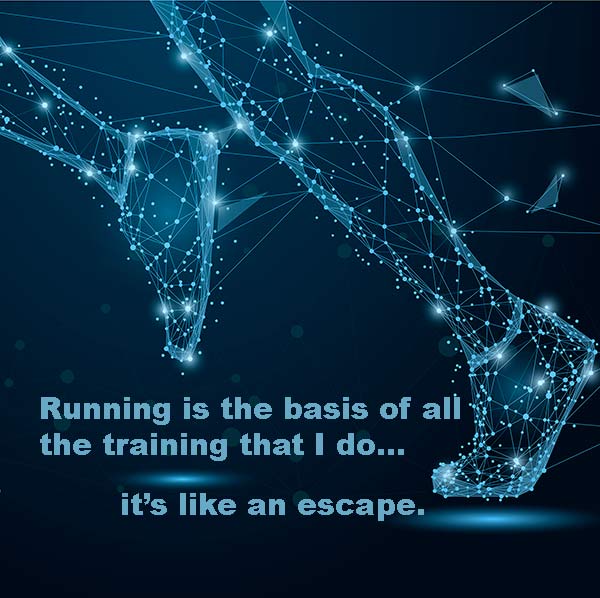 2. Running is also good; it’s what we were designed to do as humans, so it comes naturally. – Mark Webber

3. I love running but I think you have to find a workout routine that really speaks to you beyond trying to get goals for your body. For me, running, I need it as much for my head and to clear my head as I do for keeping in shape. – Meghan Markle

4. My schedule goes: wake up, running, exercise, downstairs, running shoes off, then to the shower. That’s the Jackie Chan diary. – Jackie Chan

5. Running through airports with pounds of luggage – that’s a good workout. – Rachel McAdams

6. Anyone can do running. Running should be easy. It should be fun. It should include everyone. It shouldn’t be a punishment for eating cheesecake, which is what we’ve turned it into. – Christopher McDougall

7. If you don’t have answers to your problems after a four-hour run, you ain’t getting them. – Christopher McDougall 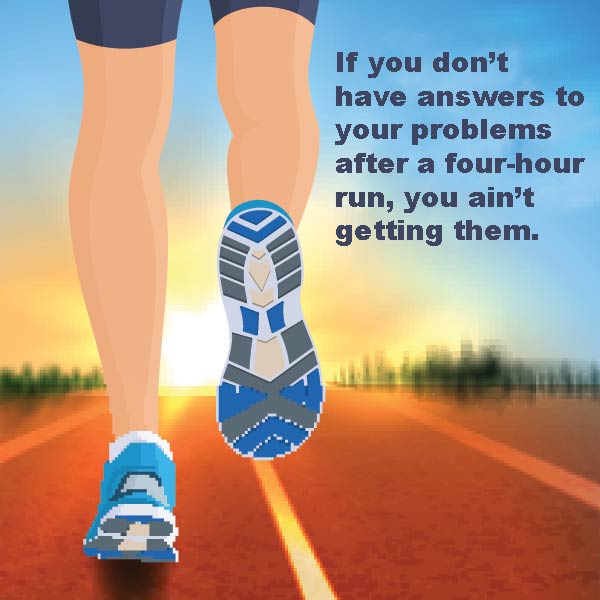 8. Our running shoes have magic in them. The power to transform a bad day into a good day; frustration into speed; self-doubt into confidence; chocolate cake into muscle. – Mina Samuels

9. Not every kid plays football, basketball. Running can be a source to vent and let things out. – J.R. Martinez

10. I like what it does for my mind. If I’ve had a bad day, if I’m feeling stressed out, if I’m feeling overwhelmed — it takes it all away. It’s my antidote for everything. If I feel any sort of emotional upheaval, I go for a jog and I feel better. — Kelly Ripa

11. Running is a basic ingredient for your health, just as much as eating and sleeping, but going out for a run by yourself and taking a moment to think also creates a certain peace. – Phil Knight

12. Running fills the cup that has to pour out for others. Running feeds the soul that has a responsibility to nourish. Running sets the anchor that limits the drift of the day. Running clears the mind that has a myriad of challenges to solve. Running tends to the self so that selfishness can subside. – Kristin Armstrong

13. I have such a stressful job that the only way I can get it out of my mind is by running hard. – Alan Turing

14. After a long day, my favorite way to unwind is by going running. Not exactly the most relaxing activity, granted, but I always imagine I’m sweating out all the things weighing on my mind. – Becca Fitzpatrick

15. Even though running is physically straining, it’s mentally refreshing. Especially when you feel like you’ve accomplished something. – Biz Stone

16. My ex would know not to talk to me until I came back from running. I’d always be in a better place. – Arielle Kebbel

Running Quotes as Metaphors for Life 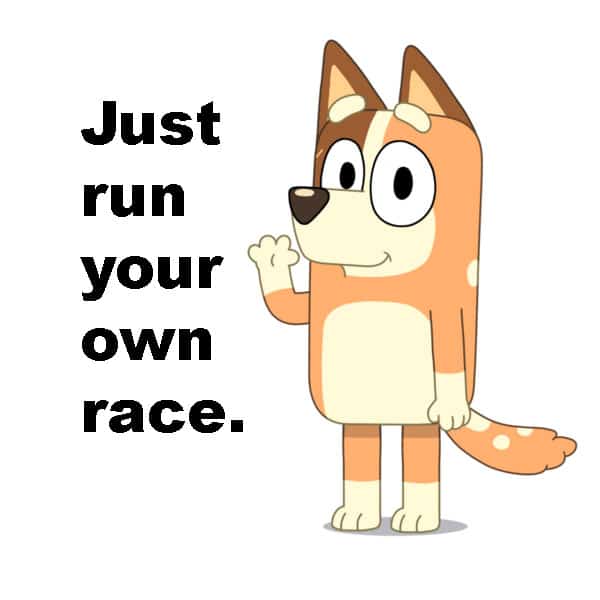 18. Speed is often confused with insight. When I start running earlier than the others, I appear faster. – Johan Cruyff

19. Running is the greatest metaphor for life, because you get out of it what you put into it. – Oprah Winfrey

21. The pain of running relieves the pain of living. – Jacqueline Simon Gunn

22. Running taught me valuable lessons. In cross-country competition, training counted more than intrinsic ability, and I could compensate for a lack of natural aptitude with diligence and discipline. I applied this in everything I did. – Nelson Mandela

23. Hitting the ball was easy. Running around the bases was the tough part. – Mickey Mantle

Running Quotes by (and One About) Famous Runners 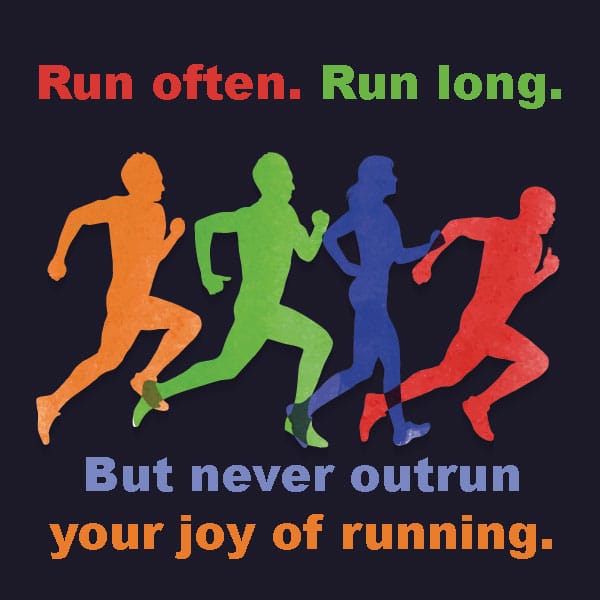 26. Life is for participating, not for spectating. – Katherine Switzer (first woman to run the Boston Marathon)

27. Why should I practice running slow? I already know how to run slow. I want to learn to run fast. – Emil Zatopek

28. Every aspect of a run, from the pain it produced to the weather conditions, offered me a choice: Is this a thought that will slow me down? Or can I find a perspective that will speed me up? – Deena Kastor

29. The pride in finishing a marathon is much greater than all the pain endured during the marathon. – Hal Higdon

30. I breathe in strength and breathe out weakness. – Amy Hastings Cragg

31. Experience has taught me how important it is to just keep going, focusing on running fast and relaxed. Eventually it passes and the flow returns. It’s part of racing. – Frank Shorter

32. Running teaches us that we are capable of so much more than we ever imagined. – PattiSue Plumer

Haruki Murakami is a writer and marathon runner, whose quotes about running are some of the most beautiful you’ll find.

34. I’ll be happy if running and I can grow old together. 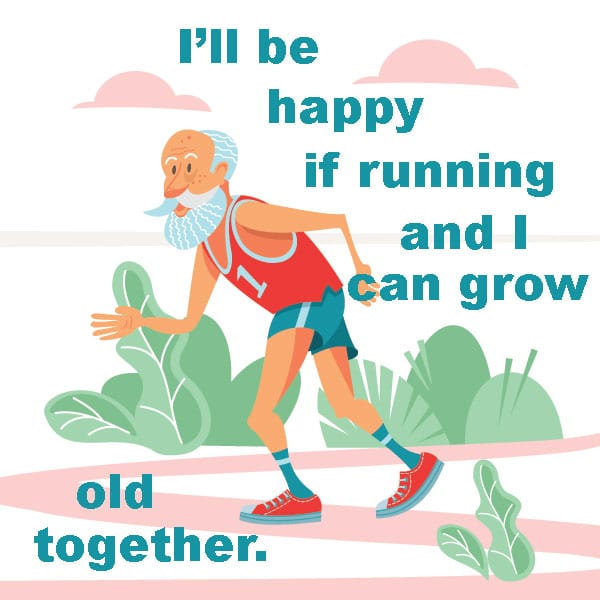 36. Pain is inevitable. Suffering is optional. Say you’re running and you think, ‘Man, this hurts, I can’t take it anymore. The ‘hurt’ part is an unavoidable reality, but whether or not you can stand anymore is up to the runner himself.

37. I just run. I run in void. Or maybe I should put it the other way: I run in order to acquire a void.

38. For me, running is both exercise and a metaphor. Running day after day, piling up the races, bit by bit I raise the bar, and by clearing each level I elevate myself. At least that’s why I’ve put in the effort day after day: to raise my own level. I’m no great runner, by any means. I’m at an ordinary – or perhaps more like mediocre – level. But that’s not the point. The point is whether or not I improved over yesterday. In long-distance running the only opponent you have to beat is yourself, the way you used to be.

Florence Griffith Joyner, better known by her nickname Flo-Jo, was an Olympic runner who won three gold medals and set the world record for the 100 meters at the 1988 Olympics.

38. I believe in the impossible because no one else does.

39. You were born to run. Maybe not that fast, maybe not that far, maybe not as efficiently as others. But to get up and move, to fire up that entire energy-producing, oxygen-delivering, bone-strengthening process we call running.

40. A muscle is like a car. If you want it to run well early in the morning, you have to warm it up.

41. When you first get a hill in sight, look at the top of it only once. Then imagine yourself at the bottom of the other side.

42. People don’t pay much attention to you when you are second best. I wanted to see what it felt like to be number one.

Jesse Owens was an Olympic runner and long jumper who set three world records in 1935 and went on to win four gold medals at the 1936 Olympics.

ESPN named him the 6th greatest athlete of the 20th Century.

43. Life doesn’t give you all the practice races you need.

44. I always loved running – it was something you could do by yourself and under your own power. You could go in any direction, fast or slow as you wanted, fighting the wind if you felt like it, seeking out new sights just on the strength of your feet and the courage of your lungs.

45. A lifetime of training for just ten seconds.

46. We all have dreams. But in order to make dreams come into reality, it takes an awful lot of determination, dedication, self-discipline, and effort.

48. When I ran, I felt like a butterfly that was free. 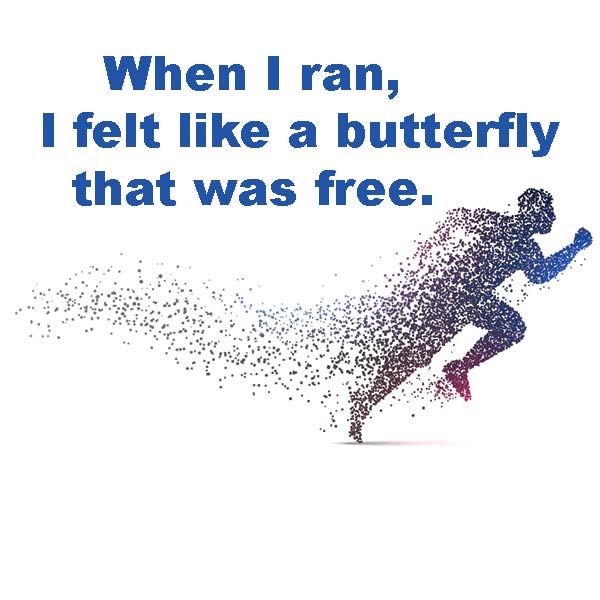 49. Winning is great, sure, but if you are really going to do something in life, the secret is learning how to lose. Nobody goes undefeated all the time. If you can pick up after a crushing defeat, and go on to win again, you are going to be a champion someday.

50. I loved the feeling of freedom in running, the fresh air, the feeling that the only person I’m competing with is me.

Steve Prefontaine was a long-distance runner who set multiple American records. He failed to medal in his single Olympic appearance in 1972, and died in a car crash before the 1976 Olympics at the age of 24.

53. It doesn’t feel that good when you’re ahead the whole way.

54. Every once in a while I think, ‘What am I doing out here running, busting myself up? Life could be so much easier. The other guys are out having fun, doing other things, why not me?

57. Did you ever run behind a slow pack? You get a trailing wind and a lot of body odor.

And, last but not least, our dear Forrest Gump, who did everything, gave us several memorable quotes about running.

59. My momma always said you got to put the past behind you before you can move on. And I think that’s what my running was all about. – Forrest Gump

60. Now you wouldn’t believe me if I told you, but I could run like the wind blows. From that day on, if I was going somewhere, I was running! – Forrest Gump

61. That boy is just a running fool. – Onlookers as Forrest runs by

Want more yuks with your running content? Check out Running Puns That Will Give You The LOLs.

Just getting started with running? Check out our beginners guide – Getting Started With Road Running.