Running is one of the most basic forms of cardio exercise you can do.

It requires no equipment (aside from a decent pair of running shoes), can be done almost anywhere, and is super effective.

The faster or longer you run, the greater its benefits, which helps you break through plateaus and keep all those numbers that indicate good health heading in the right directions.

Perhaps, the best thing about running, though, is how accessible it is.

You don’t need a gym membership or expensive equipment to do it.

It’s just you and your body.

And, of all the many forms of running, road running may be the most accessible of all.

What is road running? 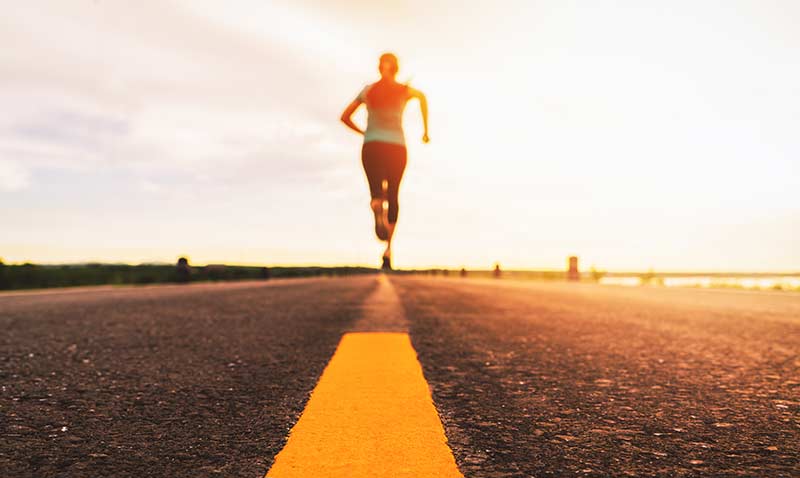 Not only is road running accessible, due to the flat, smooth nature of the terrain, road running is also one of the easiest forms of running you can do, making it a great place to start if you’re new to running for fitness.

The benefits of road running are the same as endurance running in general.

Some of those benefits include:

Is running bad for your joints?

Running, especially on hard surfaces like roads, is a high-impact exercise that has earned a reputation as a knee-killer, but studies have shown that to be largely a myth.

Instead, running has been proven to reduce inflammation in the knees and improve overall joint health, which can help protect knees from injury and degenerative disease, such as osteoarthritis.

However, if you already have joint issues, running may be difficult to undertake.

It asks a lot of your joints from the waist down and can make existing joint pain worse.

If you have pain in certain joints when you run, you will compensate with your other muscles and joints.

This increases the risk of injury to those overtaxed body parts.

If road running is causing you pain, that doesn’t necessarily mean you should give up running.

Instead, try running on softer surfaces.

If there is a public track in your town (many college and high school tracks are open to the public), that’s an excellent place to run to reduce impact, but running in dirt or grass are other widely-available alternatives.

The biggest downside of road running, of course, is that it’s done on the road.

This means sharing a path with vehicles, which stand a far better chance of coming out unscathed if the two of you collide.

You can avoid this danger by looking for paved recreational paths in your local area.

These paths are typically asphalt, providing the same basic surface as a road, but eliminate most vehicles. (Keep in mind, on many paths you will still have to share the way with bicycles and skateboards.)

The only real downside to paved paths is there simply aren’t as many of them and not every city or town has them.

If this safer alternative is available, though, try to use it when you can.

Road running is only the best option when there are no safer asphalt running spots available or when you’re training specifically for a road running event, such as a 5k or marathon.

Running on Concrete vs Asphalt

Why run on the road at all when sidewalks are available, you might ask.

And it’s a reasonable question in places where pedestrian infrastructure is good and most roadways have parallel walkways.

The simple answer is that asphalt is softer.

This makes it less jarring, easier on your body, and typically allows for longer runs with less fatigue.

That’s why many runners choose to run on the street instead of the sidewalk.

How often should I run?

Running is a weight-bearing, high-impact activity that requires recovery time.

When you first start to run, you should run no more than 2 to 3 days per week, depending on how your body feels, with a day of rest between.

If you have any lingering aches and pains between runs, or feel like you’re slowing down or have less energy each time you run, you’re likely overtraining and should cut back to one day per week until you are better conditioned.

Can I run every day?

When you reach a point where nothing is overly sore after a run, and you’re not panting your way through it, you can certainly run every day.

While running is high-impact, it is also a basic body movement, so it doesn’t put a lot of unnatural stress on the body.

Advanced runners often run 6 to 7 days per week, and studies have shown a daily run to be beneficial to both the heart and muscles.

But this is something to build toward, not a starting point.

For more on running daily, see Is It Okay To Run Every Day?

How many miles should I run a day?

When you first start to run, don’t worry about distance (or speed).

Good fitness is about the time put in, not the ground covered, and 30 min./day is a great starting point for beginner runners.

Don’t think you can run for 30 minutes straight?

Any running you do will help condition your body, so you can add time as you build up strength and endurance.

If you’re brand new to running, this 30-minute run may not carry you much further than a brisk walk would.

A 15-minute mile (4 mph) is quite common for new runners, with brief pauses to rest along the way.

How many miles should I run a week?

The number of miles runners run each week is typically goal-based.

Runners running solely for fitness may run only 10-15 miles per week, or two to three miles five days per week.

Runners training for marathons and other long-distance races may run 50 miles per week in the weeks leading up to a race.

Again, mileage doesn’t matter much when it comes to fitness running.

Running at a steady pace that keeps your heart rate in the fat-burn or cardio zone for 30 minutes two to three times per week will give you ample health benefits.

Running is not just good exercise, it’s one of the best cardio and aerobic exercises you can do.

According to research, the more of it you do, the longer you’ll live.

Is running good for losing weight?

Yes. Running burns a lot of calories, which makes it a great exercise for weight-loss.

How many calories do you burn when running?

While you will definitely burn calories during a run, how many calories you burn is highly dependent on how much you weigh, how fast you go, and terrain.

Even when road running, terrain can be variable.

Any amount of incline will add work to your run that increases calorie-burn.

Even a slight two-percent incline can help burn 10-20 additional calories per mile.

On average, though, a 150-pound runner can expect to burn around 125 calories per mile running on a flat road at a pace of 5 mph (barely a jog).

Increase the pace, and the runner will burn more calories in the same amount of time (though, they may actually burn fewer calories per mile, because faster runners are typically better-conditioned, more efficient runners).

If you really want to be sure of how many calories you burn as you run, it’s worth considering a fitness tracker.

A fitness tracker is one of the best ways to monitor your calorie-burn as well as your heart rate, which is super important during intense cardio exercise.

Running is a good fat-burner regardless of pace, but it’s more even effective at speed.

Sprints are a HIIT (high-intensity interval training) exercise and the best means of burning fat through running.

For more on what sprints can do for your body, see HIIT vs Running: The Benefits of Sprinting.

For a more in-depth comparison of running paces in general, see Sprinting vs Jogging or Running: Which is Better?

But, again, higher-intensity running (like sprints) proves most effective.

If you are starting from mostly sedentary, it’s possible running will build some muscle in your legs.

Does running make your legs bigger?

Again, if you are starting from a largely sedentary lifestyle (if running increases your time on your feet during the day), you will likely see some minor growth to your leg muscles when you first start to run.

Though, not a lot.

If it seems like your legs are getting big fast, you are probably not experiencing muscle growth, but inflammation.

While a short period of inflammation is perfectly normal after a run and can actually help your leg muscles heal, if your legs look bigger between run days, it’s likely you’re not taking enough time to recover or properly fueling your body for workouts.

What Muscles are Used in Running

Running incorporates all of the muscles below the waist.

For more specifics on the muscles used in running, see Sprinting vs Jogging or Running: Which is Better?

Road running is an ideal fitness option for many people because it’s so accessible.

The intense cardio and aerobic aspects of running, however, can make it difficult for beginners.

If you are starting from a place of very little exercise, expect it to take some time to get comfortable with the demands on your heart and lungs.

Maybe even your knees.

The good thing about running, on a road or otherwise, is that it is easily adapted to any fitness level.

If it feels like too much, you can always slow down. Taking walking breaks during a run to slow your heart rate and take a few deep breaths is always an option.

And any running you put in will help condition your heart, lungs, and muscles, so you will increase your endurance as you go along.

To get started with road running, you don’t need much – just some clothes you’re comfortable and move well in, a pair of quality running shoes, and a means of transporting water.

For longer runs, you’ll also need salt in some form to keep your electrolyte levels up and to prevent cramping.

Aside from that, everything is pretty optional, depending on where and when you’re running.

For more on running equipment and what to wear, see What to Wear Running and Essential Running Gear (Equipment For Every Outdoor Runner).

Running is an incredible cardio and aerobic exercise that uses the body in an intense, yet natural way, and road running is one of the easiest, most accessible forms of running there is.

If you’re looking for an exercise that is simple, yet highly effective, few offer the simplicity or efficacy of a good run.

And the best thing?

All you need is a decent pair of shoes and a little determination to get started.

Need some inspiration before you hit the road? Check out Running Quotes for Inspiration.

Want more yuks with your running content? Check out Running Puns That Will Give You The LOLs.