Skateboards can be molded into nearly any shape. As long as they have the main components of deck, trucks, and wheels, they’ll still roll the same.

But the standard shapes of skateboards are standards for good reason.

The most common skateboard shapes lend to different riding styles, providing the features you need for a smooth commute, to catch some air, or for added stability.

Here’s a rundown of the some of the most popular (and lesser-known) skateboard shapes and how to best put them to use.

When it comes to freestyle skateboards, there is really only one game in town – the popsicle double-kick.

The popsicle double-kick is THE standard in modern skateboard decks.

It’s the board you’ll find most people riding in skateparks and street skating. 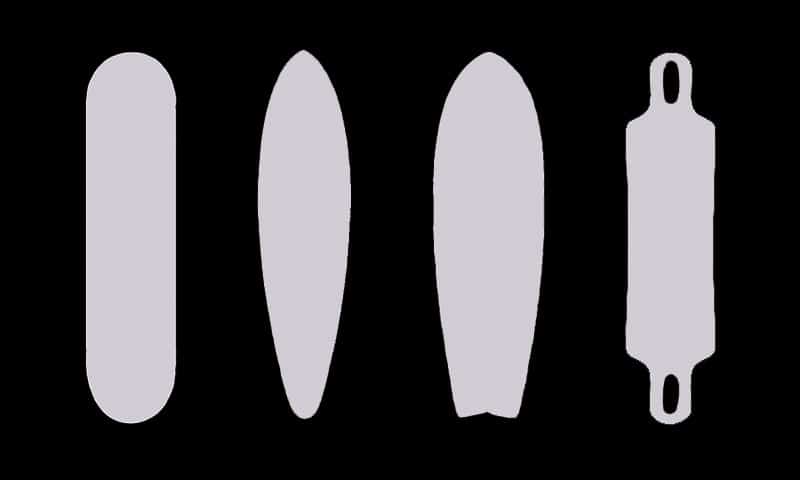 Popsicle skateboard decks are shaped like, well… popsicles. (Or, more accurately in my opinion, Band-Aids.)

They are completely symmetrical, with flat, parallel sides and matching rounded ends.

These boards are not, however, completely flat.

Both ends curve upward, creating kicktails. Kicktails allow a skater to perform kickturns and manipulate the board more easily.

The popsicle skateboard is, by far, the most common skateboard you will see in skateboard street and park competitions.

In many competitions, you won’t see anything else.

When to Use It: Street/Park/Freestyle

In modern skateboarding, any skateboard that isn’t a popsicle or a longboard is considered a “shaped” board or “fun” shape.

Shaped skateboards can be a wide variety of shapes, but they tend to fall somewhere between a popsicle and a cruiser in design.

Any deck that is standard length, but wider than a standard skateboard, is also considered a “fun” skateboard.

Fun skateboards can be used for freestyle, but also offer smoother, more stable rides while cruising.

Most often, they are put to work in spaces where neither a popsicle nor a cruiser are just right, like when skating vert or bowls.

When to Use It: Bowl/Vert/Cruising

Cruiser skateboards have two basic designs – the are pointed or rounded at one end and wider at the back (top mount kicktails) or pointed at both ends (pintails).

This gives both types of cruisers shapes similar to that of surfboards. 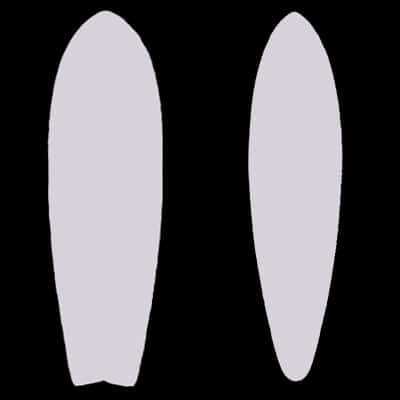 Unlike standard skateboards, cruisers have only one (back) kicktail or none at all.

They are meant for leisurely riding or commuting, not for tricks and parks.

Which cruiser design is right for you depends on your riding style.

Top mount kicktails bring you higher off the ground and provide good bowl riding, while pintails are excellent for carving due to their lower likelihoods of wheel bite.

The main difference between the two cruiser shapes is that a top mount cruiser’s wheels lie beneath the deck, while a pintail’s wheels jut out beyond the deck.

Top Mount Kicktail Cruiser Summary: Pointed or rounded at nose, wider with kicktail at back, wheels under deck

When to Use It: Cruising/Commuting/Bowl

Pintail Cruiser Summary: Pointed at both ends, wheels beyond deck

When to Use It: Cruising/Carving

Like standard skateboards (or shortboards), longboards come in a variety of designs that lend to different riding styles.

Since many cruisers are technically longboards, we have already covered two of those designs under Cruiser Deck Shapes above.

Longboards refer to any skateboard with a deck length at or above 32 or 33” in length (different manufacturers have different designations), and you can find plenty of cruisers that fall within these dimensions.

Longboards also have wider decks than standard skateboards (as do most cruisers), which make them more stable and easier to balance on.

What is considered standard or classic longboard shape, though, is the drop-through deck.

A drop-through longboard deck is a rectangular deck with tails at either end where the trucks and wheels attach. 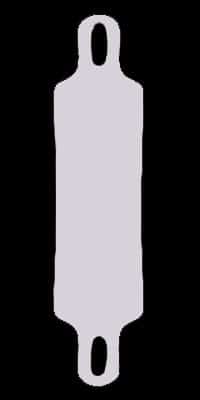 Like a pintail deck, the design of a drop-through longboard lets the wheels jut out from beneath the deck.

This all but eliminates the possibility of wheel bite and makes carving safer.

Jutting wheels also allows a longboard deck to sit nearer to the ground. Some drop-through longboards, called drop-downs, take advantage of this feature to lower decks even further.

By being closer to the ground, longboards have increased stability, which make them ideal for transportation.

When to Use It: Cruising/Commuting/Carving/Dancing/Downhill/Freeride

As already discussed, many cruisers are also longboards, so other longboard deck shapes include:

Skateboard designs have gone through a number of iterations throughout the sport’s 50-year history.

The 70s was largely when skateboarding came into mainstream popularity.

By the 80s and 90s, skateboarding had moved to the streets and skateboard legend Rodney Mullen was inventing a vast repertoire of street skating tricks that are the basis for many skateboard tricks today.

When we talk about old-school or classic skateboard shapes, we’re mostly talking about models from the 70s and 80s before popsicle-shaped boards took over in the early 90s.

Here are a few of the most memorable (and occasionally still available) old-school skateboard designs.

Stinger skateboard decks look a lot like cruisers in that they’re directional with rounded noses and wider tails.

The original Santa Cruz Stinger featured a distinct narrowing of the deck’s back end.

There are many other companies making deck designs that they call “Stinger” and that have some stinger characteristics, but the Santa Cruz is the classic.

Todays’ stingers are wider than popsicle skateboards and have utility more like cruisers.

Stinger Skateboard Summary: Rounded front half, rectangular back half, distinct divide between the two

When to Use It: Cruising/Bowl

They are as long as typical skateboards (typically 30-31”), but have considerably wider decks like longboards and cruisers.

This gives them greater stability and makes them ideal for riding at speed or in bowls.

Pig-shaped boards have very similar designs to Santa Cruz Stingers, in that they are round at the nose and squared at the rear, but without the clear distinction between front and back.

Instead, they are just a little blob of board that puts lots of stability beneath your feet and are equally comfortable on commutes or in bowls.

Pig Skateboard Summary: Rounded at front, squared at back

When to Use It: Cruising/Commuting/Bowl/Vert/Some Park

Egg or football shaped skateboards were the precursors to today’s popsicle boards, and they are also almost identical.

Like popsicle boards, egg or football shaped skateboards are symmetrical with kicktails at each end.

Due to the rounding on egg/football boards, they are typically wider than popsicle boards, but still have the same general utility.

However, the rounding on the edges can make getting your foot under a football skateboard a little more difficult, which is why popsicle boards are the more popular of the two.

When to Use It: Street/Park/Freestyle/Bowl

Which Skateboard Should I Get?

If you stick to parks, you’ll want a standard popsicle or maybe a football-shaped board if you’re feeling frisky.

If you skate bowls, a pig or wide cruiser will give you the most stability.

When you’re first starting out, you may not know where you want to end up riding, so here’s our basic rules for choosing a skateboard by shape:

In the world of modern skateboarding, the popsicle double-kick really is the skating standard.

From all the experimentation of the 80s, the popsicle double-kick was the skateboard design that rose to the top, the cream of the technical riding crop, so to speak, which is why it remains the go-to for freestyle skateboarders to this day.

That’s why longboards and cruisers have their own enduring popularity.

By knowing what you want to do on your board, how you plan to use it, and where you want to skate it, you can choose the best skateboard shape for your style of skating.