If you’re interested in putting a carbonated beverage in your Hydro Flask, then you might be wondering if that is something that you should be doing.

Can you put soda or sparkling water in a Hydro Flask bottle?

Yes, you can put carbonated drinks in a Hydro Flask with no worries!

You can even put kombucha or beer in your Hydro Flask!

I certainly understand why you might be hesitant to do this, so let’s cover all your concerns below.

Page Contents show
What You Should Know About Soda & Carbonated Drinks In A Hydro Flask
Will It Stay Fizzy?
Will It Explode?
Will It Damage The Stainless Steel?
What Drinks Can You Put In A Hydro Flask?
Final Thoughts

For most people who are considering putting a carbonated beverage in a Hydro Flask bottle, there are a few common concerns:

And I get it cause these are valid concerns to have – especially the first one if you’re an avid soda or sparkling water drinker. 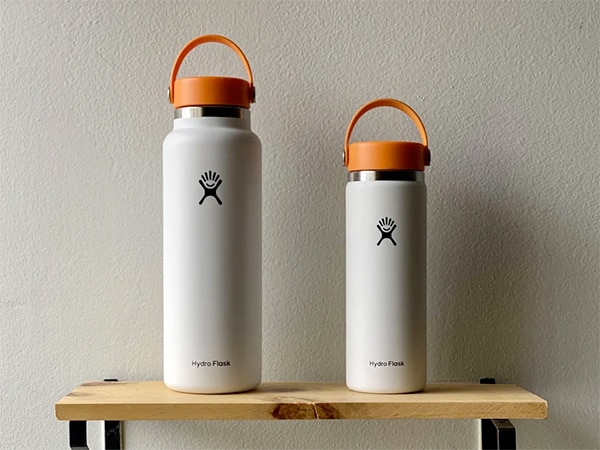 Will It Stay Fizzy?

In regards to the fizzy factor, you might be surprised to learn that storing a soda in a Hydro Flask does not make it go flat.

Oddly enough, it seems to retain the carbonation longer than if stored in an open soda bottle.

Here’s what one Hydro Flask user on Facebook had to say about it:

I put sodas in mine a few times. It was chilled before going into my hydro flask and it was fizzy for a bit. Actually longer then I had expected.

Here’s what another user on Facebook had to say about it:

When I put sparkling water in mine, I closed the flip lid and forgot about it over night, when I flipped the lid open it popped and sounded just like taking the cap off a soda bottle when it’s brand new! I was shocked. It kept the fizz for a good 24 hours.

If you’ve ever opened a soda that was shaken up, then you know how serious the phrase ‘contents under pressure’ is when it comes to carbonated drinks.

So, you won’t be crazy for wondering if you leave your soda in a Hydro Flask for a while if all that pressure won’t cause it to explode.

The truth is that it won’t cause your Hydro Flask to explode.

But, when you do open it, there may be more of a pop or more pressure than you were expecting.

Here’s what one sparkling water drinker had to say about it on Facebook:

When I had sparkling water in mine, the lid popped off a good 15 feet when I turned it to open it and the inner ring also popped out of it.

Will It Damage The Stainless Steel?

While it is true that soda is very acidic, you do not need to worry about that acid damaging the inside of your Hydro Flask.

In fact, the soda causes zero damage to the stainless steel interior of your Hydro Flask.

So, drink soda out of it as often as you like!

What Drinks Can You Put In A Hydro Flask?

Now that you know that carbonated sodas and sparkling water are okay in a Hydro Flask, you might be wondering what other drinks you can put in a Hydro Flask tumbler or bottle.

The truth is that there doesn’t really seem to be a limit in terms of what you can put in the Hydro Flask.

So, drink up – and try not to burn your mouth on that hot coffee, like I did the first time!

Though it sorta seems like a bad idea, it is 100% safe for you to put a soda or some sparkling water in your Hydro Flask.

In fact, you can safely put any carbonated drink in there – and it will stay fizzy.

So, don’t worry about pouring that soda into your Hydro Flask before heading out.